But we’re guessing that now, the feeling’s mutual. Maybe some enterprising photographer will figure out a way to arrange a shot of all metal fans in San Diego gathered in a stadium and flipping the bird at Machine Head. (more after the jump, including some embarrassment about Ozzy and some wet-your-pants funny shit about Tiger Woods . . .)

Not long ago, in a post we called What the Fuck?!?, we reported about the latest developments in the bizarro legal actions in Sweden and Norway involving Relapse Records and current or former members of Gorgoroth (Infernus, Gaahl, King Ov Hell). You may remember that the Gorgoroth paper-pushing donnybrook began when Gaahl and King sneakily filed papers in the Norwegian patent office in an effort to claim ownership of Gorgoroth’s name and logo. That spawned a successful lawsuit by Infernus to cancel the trademark rights awarded to Gaahl and King by the patent office.

Well, we’ve got our own long-running U.S. version of the same kind of bullshit over the rights to the name “Black Sabbath.” 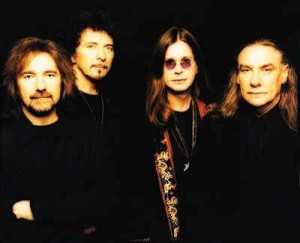 According to the New York Post, a Manhattan federal judge ruled yesterday (Thursday, February 25) that Ozzy Osbourne can proceed with his lawsuit against guitarist Tony Iommi over use of the Black Sabbath name. Turns out that in April 1999, Iommi filed papers with the U.S. Patent and Trademark Office claiming ownership of the name “Black Sabbath” and was awarded trademark rights to the name. So, in May 2009 — only 10 years later — Ozzy filed suit claiming that Iommi acted illegally and seeking a 50% interest in the trademark rights and a portion of the profits that Iommi has allegedly earned from his use of the name.

It appears that Iommi had filed a motion to have the suit dismissed on the ground that Ozzy had signed away his rights to the name when he left Black Sabbath in 1979, and it appears the judge rejected that motion. So, the suit proceeds. Here’s part of a statement previously released by Ozzy (or more likely his legal eagles):

“As of the mid-1990s, after constant and numerous changes in band members, the brand of ‘BLACK SABBATH‘ was literally in the toilet and Tony Iommi (touring under the name BLACK SABBATH) was reduced to performing in clubs. Since 1997, when Geezer [Butler, bass], Bill[Ward, drums] and myself rejoined the band, BLACK SABBATH has returned to its former glory as we headlined sold-out arenas and amphitheatres playing to upwards of 50,000 people at each show around the world. We worked collectively to restore credibility and bring dignity back to the name ‘BLACK SABBATH,’ which led to the band being inducted into the U.K. and U.S. Rock And Roll Hall of Fames in 2005 and 2006, respectively.”

It’s really nice to know that here in the good ol’ U.S. of A., our over-the-hill metal stars are just as capable of rooting around in the legal pig trough with as as much gusto as over-the-hill black metal icons in Norway. One more reason (in addition to dozens of others) why we really don’t give a fuck what Ozzy or any other current or former members of Black Sabbath are up to these days. As far as we’re concerned, Black Sabbath is still in the toilet, still swirling slowly down the drain to poopville. Ozzy “restoring credibility” and “bringing dignity” back to the Black Sabbath name? In what universe has that been happening? 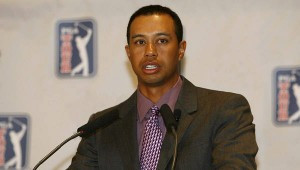 Okay, this has nothing to do with metal. But it’s just so fucking hysterical that we couldn’t resist sharing.

We don’t read The Onion except when someone sends us a link. Not enough metal in The Onion. But yesterday one of our buds sent us a link to The Onion’s satirical take on Tiger Woods’ recent press conference, in which he woodenly read a prepared statement “sincerely” apologizing for his many sexual adventures with women who weren’t his wife, explaining that he was being treated for “sexual addiction,” and announcing his return to the spiritual truths of Buddhism. That whole performance was, in a word, vomitous.

The Onion’s version of the press conference is so much better than the scripted horseshit that actually happened.  Here are a few excerpts from The Onion’s “report,” but you really need to read the whole thing here if you want to laugh til you pee yourself:

PONTE VEDRA BEACH, FL—In an announcement highly anticipated by sex fans around the world, Tiger Woods told a small gathering of reporters, family, and lovers Friday that the most dominant fornicator on the planet would soon return to sex.

“Not being able to get out there and have sex has really been tough on me,” Woods said. “I’ve missed it. I love fucking with all my heart.”

Woods said that during his brief time away from sex, he couldn’t stop thinking about one day resuming his daily regimen of sexual intercourse with random women who look vaguely like his wife, only skankier.

“When I am out there having sex, I am in complete control,” said Woods, an acknowledged master of the long game who claims he is only truly at peace when he is between the legs of a woman. “It’s just me and my thoughts. And a high-end escort. And the lounge dancer. And sometimes [caddie] Stevie. And probably some stewardess I just met.”

During his announcement, Woods released an aggressive touring schedule that reaffirmed his commitment to sex. He is slated to take part in a three-day lovemaking session in March at the Clarion Hotel in Orlando, and confirmed that he would join a foursome at the Doral Resort and Spa in Miami as a tune-up for his first major fuckfest in Augusta, GA.

In addition, Woods said he will not renege on his annual stop in Dubai, and said he looked forward to boning a prostitute on the roof of this year’s venue, the Burj Al Arab Hotel.

“I’ll probably be a little rusty,” Woods said. “But once I swing the old cock around a few times and get it in the first couple holes, I’m confident that I’ll still be able to drive it as deep as I always have. . . .”