Recently released by Unique Leader Records (also home to Arkaik, the sick California tech-death band whose new album we reviewed yesterday), Thee Arcane Progeny channels a shotgun marriage (and I mean the bride and groom have both got em) of black metal and brutal death metal, with the liturgy prescribed by translated Sumerian texts that tell of humanity’s genesis at the hands of godlike extraterrestrials from a tenth planet. Ancient extraterrestrials aside (for the moment), the music Sarcolytic unleashes is elemental and unadorned in its grim fury. (read more after the jump, and listen to a cut from the album . . .) 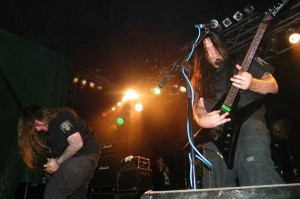 From the black metal side of the aisle, Sarcolytic employs a blizzard of non-stop blast beats courtesy of capable ex-Disgorge drummer Ricky Myers and waves of dissonant, tremolo-picked guitar from Steven Watkins. (By the way, this is not “symphonic” black metal, but the no-keyboard, no frills garage sound of an earlier epoch.) From the death metal side of the aisle, Jon Zig delivers beastly rasping gutturals and the occasional evil, shrieking howl, while Watkins contributes hammering chainsaw riffs and squealing technical runs.

The atmosphere is dark and forbidding, and what melody emerges on this album from the cascading wash of black metal guitar work is the buzzing drone of gargantuan hornets stirred from their nested slumber into ominous flight. There is headbangable rhythm to be found here, but only for the nimble, because Sarcolytic favors shifting time signatures and, like those monstrous insects, doesn’t stay in one place for long.

And now for those extraterrestrial gods.

Thee Arcane Progeny appears to be a concept album based on a book by Zecharia Sitchin called The Lost Book of Enki. Sitchin is a prolific writer who posits, based in part on his translation of ancient Sumerian texts, that our solar system included a 10th planet (Nibiru) in a long elliptical orbit, populated by a race of extraterrestrial gods (the Anunnaki) who created mankind through genetic engineering. Sitchin also theorizes that Earth itself was created through the collision of Nibiru with yet another planet, Tiamat. In The Lost Book of Enki, Sitchin apparently collected many of his previous theories and investigations in the form of an imagined mythical telling of those creation events and how the intervention of the Anunnaki explains much of humanity’s ancient cultures and belief systems.

We’re gonna reserve comment on The Lost Book of Enki because we haven’t read it (or anything else by Sitchin) and also because we’re afraid we might sound kinda snarky. Besides, it’s always refreshing to see evidence that extreme metal bands (a) read books, (b) think about what they’ve read, and (c) care enough about something they’ve read to incorporate it into their music — as long as it isn’t hate-filled and genocidal.

But all the reading and out-of-the-box speculation in the world won’t save an album if the musical chops are lacking. Happily, that isn’t the case here. Sarcolytic can play, they have a carefully constructed approach to their particular brand of death metal, and they’re definitely doing their part to “Keep Austin Weird.”

Have a listen to this track from Thee Arcane Progeny: