Basically, with magnificent help from Talley’s accomplished drumwork, Monolith is a 32-minute treatise on guitar metal. If you found yourself on Pandora with nothing but an electric guitar and you were trying to explain it to one of those blue Na’vi, we imagine the conversation would go something like this: “Yeah, that neural thing you got on the end of your braid is pretty cool, but this thing is a fuckin’ electric guitar, and if you wanna know all the sounds it can make, slot your braid into my iPod and listen to Monolith.” (read more after the jump, and listen to a track . . .) 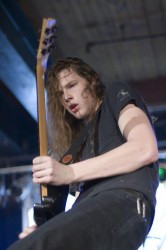 That may be a slight exaggeration, but only a sight one. The album threads together arena-rock riffs, sublimely beautiful meditations, heavy-as-shit headbanging chuggery, blistering solos, and soaring anthems — among other things. Sometimes one guitar, sometimes two playing in harmony or at counterpoint, this is a work created by people who love the instrument and damn-well know how to use it, and the songs are intelligently constructed to make full use of that knowledge.

A few of the songs include electronically altered vocals, but this is really one long instrumental work, with each song bleeding seamlessly and without pause into the next. As the songs shift in tempo and texture, they evoke a range of feelings and beautiful images. We think of it as the sonic equivalent of those time-lapse films of massive open skies that rapidly display dramatic changes in the weather and the light over the space of a single day. Every time I listen to it, a goofy grin comes over my face. (Correction: a goofier than usual grin.) 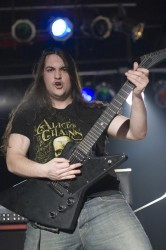 Two years in the making, Monolith is quite evidently the product of a shitload of thought, work, and attention to detail. Among other things, the album includes judicious use of various electronic effects, classical acoustic guitar interludes, piano outros, and strings — but nothing happens that isn’t intelligently calculated to contribute meaningfully and effectively to the whole listening experience. And it all works.

It’s evident that we’re completely bowled over by this album. Monolith is the kind of music that appeals to both the right and the left sides of the brain — plus the reptile part that produces convulsive headbanging.

Picking any one song as a sample of the whole is hard, particularly because each one is simply a movement in a well-constructed symphony, but here you go. Have a listen to the first track on Monolith — and if you like what you hear, the whole album is available for immediate download (at a reasonable price) at From Exile’s website.

P.S.  Attention record label geniuses:  Someone go sign Eric and Ben so they can afford to fill out the line-up for a touring band and come play for us in Seattle.