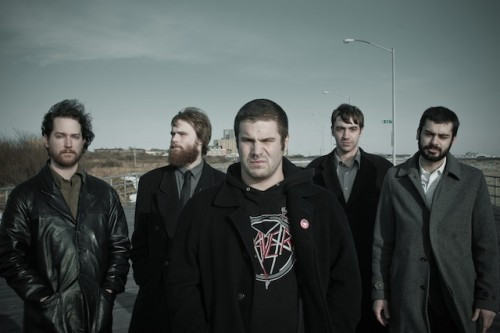 Hey, No-Cleaners.
We definitely have a whole lot of no clean singing on Flaming Tusk’s new album Old, Blackened Century. For that and many other reasons I think you’re going to love it. The album is available as a pay-what-you-will download (yes, even $0) at http://music.flamingtusk.com.
Enjoy. In a horrifying kind of enjoyment.

Well, we thought that was one of the most intriguing e-mails from a band we’d received in a while. So, we hopped right over to the linked page, downloaded Old, Blackened Century, made a monetary contribution, and started listening. And then listened again. And again. And it turns out that Flaming Tusk’s stylistic flair doesn’t stop at e-mail messaging and cool album titles.

The music is indeed immensely enjoyable, in a horrifying kind of unclassifiable metal enjoyment. If you like blackened post-hardcore proggy doom sludge noise metal, well you’ve come to the right place. (read on after the jump, and we’ll give you a track to stream, too, plus some musings about band names that Flaming Tusk may have narrowly averted . . .) 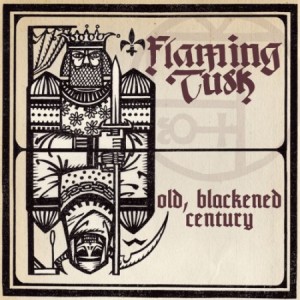 OK, that last bit about blackened post-hardcore proggy doom sludge noise metal wasn’t completely serious. Just kinda serious. The music is indeed difficult to classify, but getting stuffed into a pigeonhole is quite evidently the last thing these dudes from Astoria, New York want.

The creatively crafted songs are mainly evil, mid-tempo stompers with lots of inventive guitar riffs veering over the landscape from chugging drones to intricate, screaming solos, to headbanging chainsaw grinds. The rhythm instruments often seem to be plowing ahead with minds of their own, shifting time signatures at will, only to link arms in cohesive blasts of infectious heaviness. There’s an end-of-the-world atmosphere to the sound, but with the message that the last men standing will go out shaking their fists, spitting, with a sneer on their lips.

The instrumental work isn’t the only source of that crushingly apocalyptic menace. Vocalist Stolas Trephinator holds up his end of the devil’s bargain, too. Stolas studied at the Enslaved/Immortal/Gorgoroth school of raspy shrieking, but he also delivers plenty of satisfyingly vicious, deeper-throated growls.

When we listen to Flaming Tusk, we’re reminded at different times of Cobalt, Tombs, Hull, Ludicra, Coalesce, early Mastodon, and — well, you get the idea. Like we said, hard to classify. They don’t really sound exactly like any of those bands, and we certainly don’t mean to suggest they’re intentionally modeling themselves on any of them, but drawing those comparisons is one feeble way of giving you an idea of what Old, Blackened Century brings to mind.

Maybe it’s enough to say that if you’re starting to get bored with the metal you’ve been cranking recently, and you’re after something out of the box, you should go listen to Flaming Tusk’s horrifyingly enjoyable opus. (But really, be forewarned about the last song on the album — “Icy River”, which clocks in at nearly 10 minutes — it’s like the sonic equivalent of being tied naked to your bed with a dozen giant, oily black centipedes slowly crawling toward your face.)

Tom Beaujour did the production and engineering work on the album at his Nuthouse Studios in Hoboken. Beaujour also did the engineering on Scale the Summit‘s awesome prog-metal extravaganza Carving Desert Canyons. He had this to say about his experience with Flaming Tusk in the studio:

“Crazy-ass extreme underground metal. A smarter, more well-read bunch of guys you have never met.  They are obsessed with bizarre spirits (of the alcoholic, not supernatural type) and had bottles of some of the weirdest shit I have ever seen (artichoke liqueur, anyone?) at the ready at all times.” 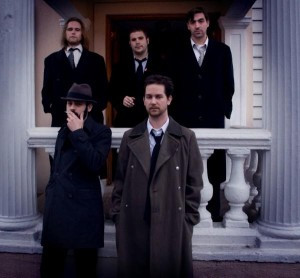 “Flaming Tusk has crawled out from the studio and begun applying salve to its whip wounds. Eight songs. Quarts of blood lost. The fraying thread of sobriety. We’ll get it out to you as soon as we get some art work and figure out how many trucks we’ll need and of what size.”

“You may download Flaming Tusk’s full-length in many high-quality formats, and pay whatever you find meet. If you choose to pay nothing, Flaming Tusk will play a free show in your town, and then afterwards when you go up to tell them how great they were, they will fix you with the evil eye and your line will perish.”

“Flaming Tusk brings February to a screeching halt by ruining a party at Legion in Brooklyn with agonizing noise and screaming.”

See what we mean? And then there’s the band’s title choice for its 2008 EP (two songs of which appear on the full-length). Abigail was named after the abysmally unfortunate Abigail Taylor, who died at the age of 6 in a particularly hideous way. According to The Font of All Human Knowledge:

“On June 29, 2007, Abigail Taylor’s parents took her to the Minneapolis Golf Club in St. Louis Park, Minnesota. Everyone was leaving the wading pool when she accidentally fell on the open drain of the pool and her buttocks were sucked into the aperture. The suction tore out a large section of her intestinal tract [21 feet] through her rectum along with her pancreas and liver.”

Fuck, we wish we’d been left to assume that the EP was named after Abigail Adams, the second First Lady of the United States. She only died of typhoid fever.

You really can download Old, Blackened Century (and/or the horrifyingly named Abigail) for little or no money, or a lot of money — your choice — by going here. You can even stream the whole thing at that location before deciding what to do. Our recommendation is that you make a contribution, you know, because we’re bleeding hearts when it comes to DIY metal bands. Specifically, we recommend $666, $66.6, or $6.66 (as Karl Marx said, “from each according to his ability . . .”). But to get you started in your thinking, here’s one infectious track you can stream without leaving the NCS site:

So, cool album title, cool writing, cool music. All that’s left to consider is the cool band name. Where did that come from? According to a typically atypical band interview here, Flaming Tusk’s drummer, Xristophage, “was fucking around on the internet one day and the phrase ‘Flaming Tusk’ entered his head. He thought that sounded pretty badass . . . .” And voila!

That was such a lucky happenstance! Consider for a moment what might have happened if any of the following phrases had popped into Xristophage’s head instead of “Flaming Tusk”: 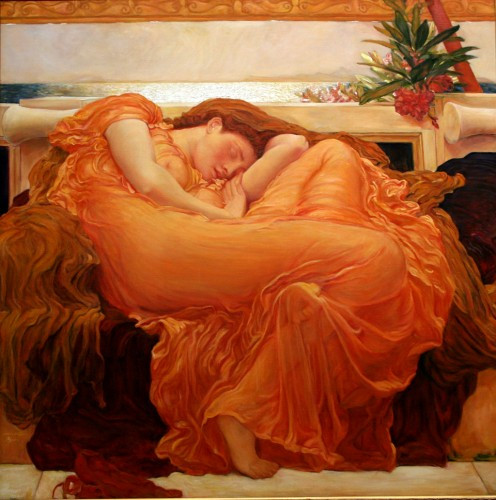 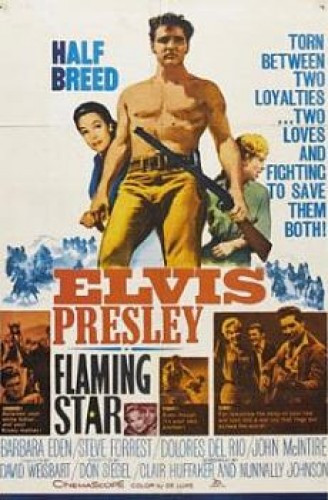 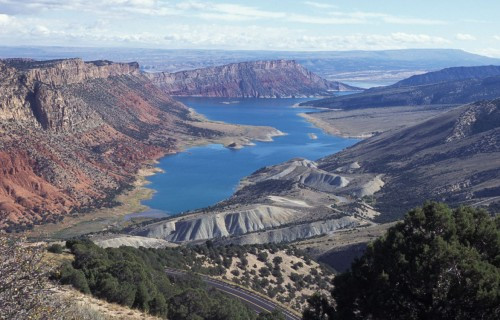 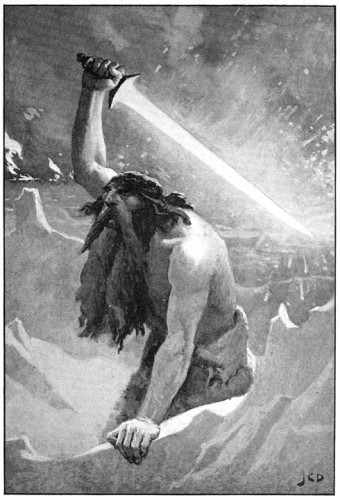 "The Giant With the Flaming Sword" by JC Dollman 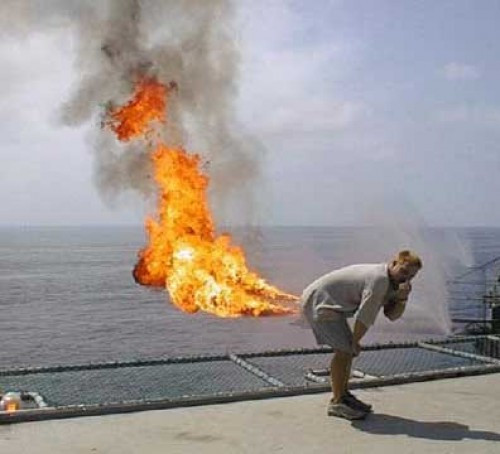 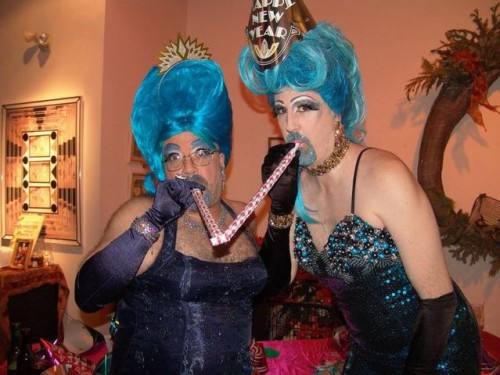 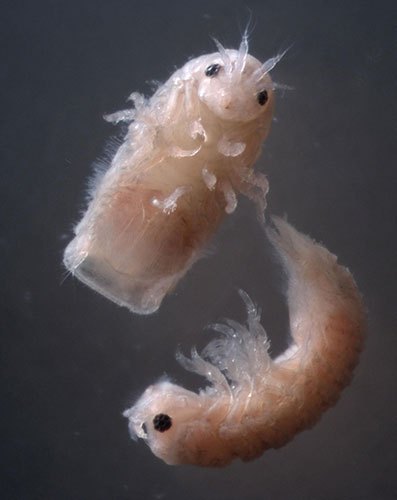 Okay. I think we can all agree that from the “Flaming” family of potential band names, Xristophage made the right call.

But if only he had stumbled across Gribble! What, you might ask, are gribbles? Well, I’d be happy to tell you, but I’m outta time. Go here if you’re curious. And listen to Flaming Tusk.