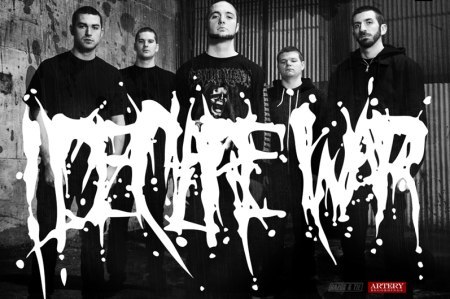 We’ve had a weakness for our local boys in I Declare War ever since we first saw em play live a couple years ago. They work their butts off and they churn out some brutal death metal. Plus, one of our favorite band shirts is theirs, with the following in big letters on the back: “IF IT AIN’T BROKE, BLAST BEAT THE FUCK OUT OF IT.”

We put up a post last November about IDW entering the studio to begin recording a new album. What we didn’t know then but have just learned today is that they had a deal in the works with The Artery Foundation. Now the news is public. Excerpts from a press release issued by the band and Artery:

“Seattle, Washington-based death metallers I DECLARE WAR have inked a deal with Artery Recordings, the new joint venture between The Artery Foundation and Razor & Tie. The band’s self-produced new album,“Malevolence”, will be released on June 1. . . .

“During I DECLARE WAR‘s first tour in 2007, the band happened to cross paths with well-known death metal band WHITECHAPEL, and played what [guitarist] Evan [Hughes] calls ‘one of the worst shows both of us ever played.’ The unfortunate concert turned into a lasting friendship and one of the best things to happen to the band. When Alex Wade from WHITECHAPEL was approached by Artery in regards to possible bands to sign, he suggested I DECLARE WAR, and so the relationship began.”

And here’s a bit more info from Evan Hughes blog:

“[The band’s manager] Shawn [Carrano] set us up with Chris Common at The Red Room in Seattle [for the studio work]. Shawn knows Matt Bayles, who co-owns the studio with Chris. Alex [Wade] got us hooked up with some artists to do our album art and some shirt designs. The album art was done by Colin Marks. He did the art for Whitechapel’s “This Is Exile”, Impending Doom’s “The Serpent Servant”, Suicide Silence’s “No Time To Bleed”, and a ton more. . . . After the album was done it was sent to West West Side Music in New York where Alan Douches mastered it. Alan Douches masters pretty much anything that’s metal; from Beneath The Massacre to Mastodon, The Black Dahlia Murder and Converge…this guy does it all.”

We’re so pleased for these dudes. Sometimes talent and hard work pay off, and being in the right place at the right time doesn’t hurt either.  We are super-stoked to hear the new music when it’s ready for release. Check out the album cover: