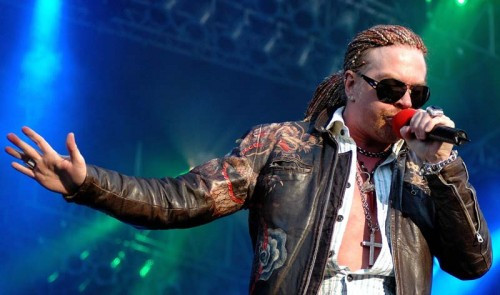 Recently, a friend of ours who regularly visits this site gently criticized us for almost never posting a negative album review. He wondered if we’d ever heard an extreme metal album we didn’t like.

The answer to that question is “Fuck, yes!” We just (usually) choose not to spend our limited time verbally peeing all over hard-working bands because their music doesn’t favorably impress us or because their dreams exceed their talent. We get more satisfaction from supporting bands we think are deserving and from suggesting music we think our readers might find worth their time.

Maybe that’s a bad decision. Maybe we should spend more time warning people off craptastic metal. After all, that is what music critics generally do — they praise the good and they criticize the bad.

Except we’re not really music critics. We’re just a bunch of goof-offs who happen to really love extreme metal. We write about it because we dig it, and so it just comes naturally to talk about what rules instead of what sucks. Besides, you can find lots of sites whose writers just can’t wait to tell you what sucks.

There have been times when we’ve had misgivings about this, when we think our credibility could be enhanced by mixing in more scathing commentary along with the panting adulation.

We’re certainly capable of it, but so far we’ve chosen to reserve our invective for select company — not for the struggling bands who are doing their best to create new music because they love it (even if it’s bad), but for the the self-important, the self-indulgent, the overly dramatic. In a word, for the Axl Rose‘s of the metal music world. (more after the jump, if you’ve got the stomach for it . . .)

And that brings us to Blabbermouth. Blabbermouth provides a valuable service to schmo’s like us. It collects in one place all sorts of press about new releases, new developments, new tours, and it often sparks our interest in bands we’ve never heard of.

On the other hand, to find the nuggets you have to wade through a seemingly endless supply of boring stories/interviews about Dave Mustaine, Kiss, Ozzy, Slash, Axl Rose, and other metal “celebrities,” most of whom left their best days far behind them. Case in point: 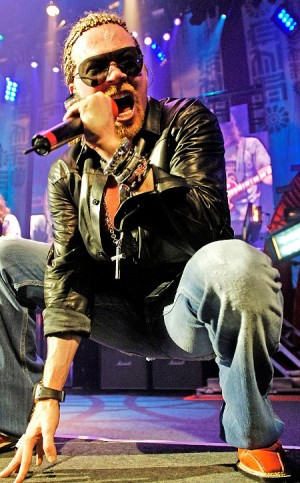 Gun N’ Roses was a ground-breaking band that put out some awesome albums which have stood the test of time. That was then. This is now. And in the here and now, Axl Rose has turned into a self-centered blowhard. Take, for example, the following bits of reportage about (and from) the aforementioned Axl Rose that appeared in just a 48-hour span last weekend on Blabbermouth, along with our usual incisive commentary. (Yeah, shoot me in the head, cuz I was stoopid enough to read this tripe, and then inflict it on you. But there’s a ray of light at the end of this . . . .)

“According to the New York Post, an A-list crowd of Brazilian billionaires and supermodels rioted at 3 a.m. yesterday after waiting hours for GUNS N’ ROSES to perform, and then learning Axl Rose and his band wouldn’t play. The exclusive concert in a Sao Paulo club was hosted by Ana Beatriz Barros and fellow lingerie models. ‘The audience got angry and started to mount the stage, and fight and destroy everything,’ a source cited by the New York Post source said. ‘It was wild. There were fights everywhere, on the dance floor, in the bathrooms, outside the club. Crazy. I guess the free drinks didn’t help.'”

Incisive NCS Commentary: Yawn. Brazilian billionaires and supermodels. There’s a real metal crowd for you. Fighting on the dance floor, because why? Not moshing that got out of hand, no. Because they thought it would be the “in” thing to do, to get fucked up and go see/hear the godlike Axl Rose in a place where no plebes would be allowed. Serves ’em right that Axl was a no-show.

And as for the no-show, maybe the promoter really set up this billionaires-and-supermodels-only VIP club show without saying one word to anyone in the Axl camp. But we really doubt it. He’s certainly not above playing private high-dollar gigs to celebrities, because he did exactly that last month in New York. At most, we’re betting someone just failed to mention it to His Lordship, who then pitched a fit.

“Singer Axl Rose stopped GUNS N’ ROSES‘ concert last night (Saturday, March 13) at Estádio do Palmeiras in São Paulo, Brazil about two minutes into the show’s opening number, “Chinese Democracy”, after a member of the audience allegedly threw a bottle on stage. “Where’s the little fuck over here?” Axl asked after he instructed his bandmates to stop playing. “C’mon, coward. You wanna fuck up the show for everybody? ‘Cause I’ve got no problem — I will leave. We will all leave. You wanna play games? You can fuck yourself or we can have some fun.”

“You guys wanna have fun? Then I don’t need no little fucking pussies like we had the other night at that club. [Presumably referring to the incident Thursday night when an A-list crowd of Brazilian billionaires and supermodels rioted after waiting hours for GUNS N’ ROSES to perform, and then learning Axl Rose and his band wouldn’t play. — Ed.] You wanna fuck with me and my boys? We will leave.”

Incisive NCS Commentary: Mind you, we’re not in favor of throwing bottles at anyone on stage, even a deserving target like A. Rose. And surely, the douchebag who launched that projectile knew what he was letting himself in for when he bought tickets to see this dreadful show. On the other hand, can’t say we blame him for wanting to throw a bottle.

But the best part was Axl’s reaction: “You wanna fuck with me and my boys? We will leave!” Not, “come up here you pussy and let’s get it on!” but “We will leave!” To which we would have said, “Don’t throw me in that briar patch Bre’r Rabbit!”

“GUNS N’ ROSES frontman and sole original member Axl Rose has released the following statement via Twitlonger.com, a related Twitter site where one can post messages longer than 140 characters: 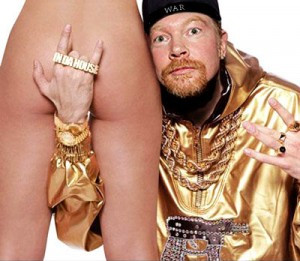 “So I’m in the shower at the gig after r Sao Paulo show n’ when I touch the faucet I get a jolt of electricity!! Wtf!! Time 2 get the fuck out da water!! Anyway! After a bunch of meds, about 2 1/2+ hrs of warmups, r show n’ another hour of warmdowns we’ll b headin’ into Rio for r show there. This was hard comin’ as all anyone bsides the band thinks about is the money. Who gives a fuck about the fans, how it sounds or if it fucks up the rest of the tour?! I don’t perform for ANYONE in this industry n’ no matter how nice, funny or what spin they put on things they’re seemingly n’ unfortunately all the same. We had a good show here in Sao Paulo n’ a bunch of opportunists w/out my knowledge or consent did their best to make it about them b4 hand instead of the fans or there wouldn’t have been shit in the Post but hey we got past ’em enough to do r gig. What’s really crazy is these same types have the unmitigated gall to feel they’re the ones who were taken advantage of!! Fuck the bourgeoisie!! Of course that’s not to say there weren’t plenty in attendance the other nite who like us got duped as well but the others well… It’s not for them or their kind (or stalkers or press agents etc.) It’s for u. Thank you Sao Paulo!! Peace, Axl.”

Incisive NCS Commentary: Gosh, where to start? In the first place, this is some authentic frontier gibberish, not made any easier to decipher by Axl’s linguistic efforts to be “street.” And the dude clearly reads everything that’s written about him, including the NY Post piece about the billionaire/supermodel dust-up the night before.

But the best part is the “fuck the bourgeoisie” and the “It’s for u” rhetoric. That’s Axl for you — a man of the people, underground to the core, just keepin it real.  So, that must have been an imposter who played the private celebrity gig in NYC, right? And that must definitely be an imposter in that promo shot up above. Uh huh.

If Axl really wants to fuck the bourgeoisie, he should take some a that bling he’s wearing and send it to a hard-working band like Flaming Tusk or Bloodshoteye. They could use it to pay for something useful like, I dunno, food. 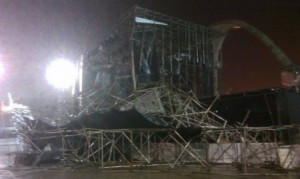 “GUNS N’ ROSES frontman and sole original member Axl Rose has released the following statement via Twitlonger.com, a related Twitter site where one can post messages longer than 140 characters:

“ATTENTION: The March 14th GUNS N’ ROSES show in Rio De Janeiro at Apoteose Stadium has been officially canceled for this evening due to the stage collapsing because of heavy rains. Stay tuned for more info and possible rescheduling information as we receive it. There is a possibility the show may be rescheduled for tomorrow night, March 15th or at a later date. There fortunately are no fatalities but there are injuries from both our camp and Rio crews the extent of which is not known at present. The Rio Fire Dept is evacuating crews out of the venue to avoid further injuries with the heavy rains and winds. Details are just coming in. Also a truck w/part of The Sebastian Bach Band’s gear has rolled on the trip from Sao Paulo to Rio what is our understanding several times and we are awaiting details on the safety of the driver at this time. Thank you for your understanding and please be safe out there. Thank you. Axl Rose.”

Incisive NCS Commentary: This should be getting a lot more press coverage. Finally, after millennia, incontrovertible proof that God does exist. And better yet, He/She/It has got some taste in metal, too.