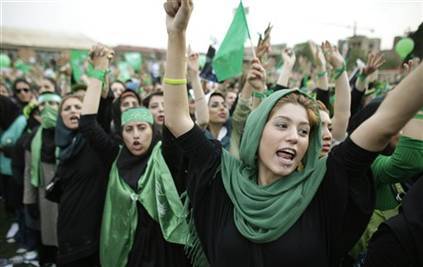 This news item in yesterday’s paper caught our eye. Under the headline “Iranian cleric: Promiscuous women cause quakes”:

“A senior Iranian cleric says women who wear immodest clothing and behave promiscuously are to blame for earthquakes.

“Iran is one of the world’s most earthquake-prone countries, and the cleric’s unusual explanation for why the earth shakes follows a prediction by President Mahmoud Ahmadinejad that a quake is certain to hit Tehran and that many of its 12 million inhabitants should relocate.

“‘Many women who do not dress modestly … lead young men astray, corrupt their chastity and spread adultery in society, which (consequently) increases earthquakes,’ Hojatoleslam Kazem Sedighi was quoted as saying by Iranian media. Sedighi is Tehran’s acting Friday prayer leader.” 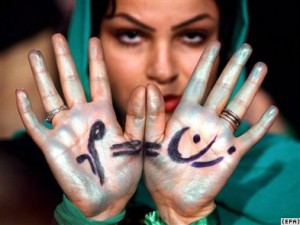 More from that press report we were quoting above:

“Women in the Islamic Republic are required by law to cover from head to toe, but many, especially the young, ignore some of the more strict codes and wear tight coats and scarves pulled back that show much of the hair.

“‘What can we do to avoid being buried under the rubble?’ Sedighi asked during a prayer sermon Friday. ‘There is no other solution but to take refuge in religion and to adapt our lives to Islam’s moral codes.’ . . .

“Minister of Welfare and Social Security Sadeq Mahsooli said prayers and pleas for forgiveness were the best ‘formulas to repel earthquakes.’

“‘We cannot invent a system that prevents earthquakes, but God has created this system and that is to avoid sins, to pray, to seek forgiveness, pay alms and self-sacrifice,’ Mahsooli said.”

Shit, if women showing a little hair or wearing tight coats can cause earthquakes, just imagine what some actual cleavage would produce. Tidal waves and volcanoes! Armageddon! The end of all life on earth! 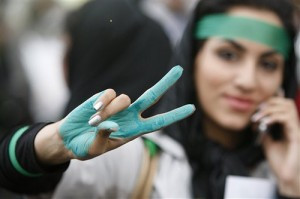 With these kinds of antediluvian attitudes about women on prominent display, you can just imagine how Iran’s theocracy feels about extreme metal (or basically, about any music). And you’d be right. Kids in Iran have been arrested not only for playing metal but for listening to it.

But Iranian metal persists, and we found some to share with you. Based on our modest research, it appears that among the extreme metal arts, black metal is particularly popular in Iran. What a shock!

So, here’s a track from an Iranian black-metal band (actually a duo, which has dropped in the last couple years to a single guy) called Sorg Innkallelse. We can’t begin to imagine what kind of natural catastrophes their music has caused in the homeland — or the kind of courage it takes to do this in a place like Iran.

The production quality sounds as if these guys recorded the album in a closet. And maybe they did. But if you make allowances for that, it’s pretty decent music. Listen to this track, fittingly entitled “Captive in Hell”:

P.S. In case you misunderstand, we’re not picking on Islam. Really, we’re not. We haven’t forgotten about American evangelicals Jerry Falwell and Pat Robertson opining that “the pagans, and the abortionists, and the feminists, and the gays and the lesbians” helped cause 9/11 by bringing down God’s wrath.

We’re not even really picking on religiosity in general. We’re just depressed and infuriated by the kind of FUCKTARDED LUNATIC IGNORANCE that thinks women cause earthquakes, or that gay people cause terrorist attacks, or that music is bad for the soul. In the name of God, some people are doing their best to create hell on earth. Shame on them.

2 Responses to “MULLAH SPEAKS (and we spew)”