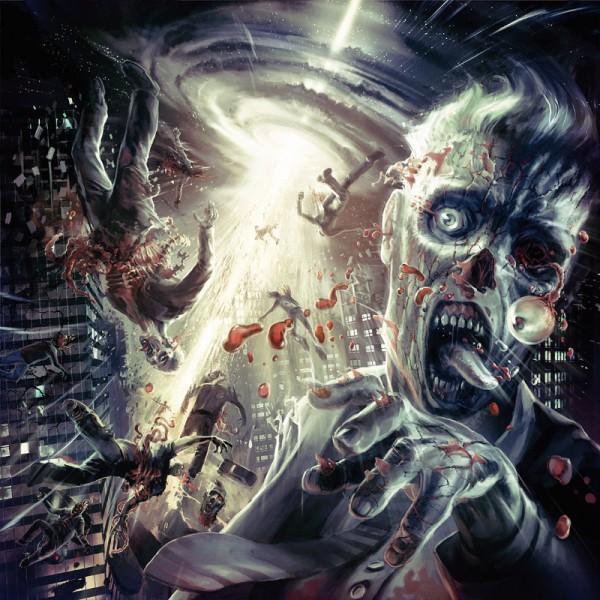 Hey, sorry we made that album cover (above) so big.  We know it must have come as a shock when you opened up this page and saw that gruesome piece of mind-fuckery. We just couldn’t help it. We have to have our fun where we find it.

Yeah, so that’s an album cover. Not just any album cover, but an album cover by Pär Olofsson, who’s done the album art for bands like Immolation, Miseration, Revocation, Arkaik, Immortal, The Faceless, Winds of Plague, and many others. We put up a whole bunch of his album covers for your viewing pleasure here not too long ago (scroll down when you get to that link).  Have to say that none of them really looked anything like the one above.

You may ask, “What’s it a cover for?” It’s a cover for an album called Quantum Catastrophe. You may ask, “Who’s the band?” The band is called Brain Drill. But of course it is. That’s a really accurate name. If you heard their 2008 debut album, Apocalyptic Feasting, you know what we’re talking about. The new one, the aforementioned Quantum Catastrophe, isn’t officially out yet. It’s not due for release (on Metal Blade) ’til May 11. But you don’t have to wait until then for a taste.  (more after the jump, including some audio and video tastes . . .) 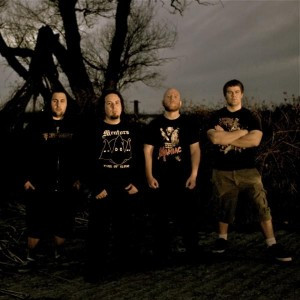 So maybe you’ve never heard of Brain Drill?  If not, then let’s play a little guessing game. You try to guess what their music sounds like based on a couple of clues:

1.  Look at that album cover again.

2.  Contemplate the name of the band.

OK, that ought to be enough. Have you made your guess? Now listen to this track from Brain Drill’s debut album and see how close you came:

So, how’d you do on your guess?  Are your ears bleeding?

Well, maybe you chose not to listen to that track because we scared you off.  Shame on us! So we’ll just tell you what kind of music Brain Drill plays.

It’s blowtorch metal. By which we mean it’s brutal, technical death metal played at the speed of grindcore. No, we take that back — they play faster than grindcore. You know that old cliche about drumming that sounds like machine-gun fire? Well, we really mean it here. And blazing distorted riffing? Yeah, that’s here too. And vocals that sound like a jet engine turbine that’s fully spooled up? You can check that off, too. And furious shredding that will make you think your music player is about to self-combust? Right again.

There’s really only one purpose for listening to this kind of music: If you want something that will scour out the inside of your head until you have a nice hollow skull that will rest lighter on your shoulders. You can’t think about anything else while you listen to it, and you sure as fuck can’t think about anything else afterward because there’s damned little left of what you used to think with.

So, if you already know Brain Drill or you listened to that track we’re streaming up above, you might be wondering what the new album will sound like. If you dig the music (which we sure as hell do), you’re maybe hoping for more of the same. And if you don’t dig it, maybe you’re hoping that these dudes turned their impressive talents to folk metal.

Well, we won’t play another guessing game with you. We’ll just show you this new video of a song from the forthcoming album called “Beyond Bludgeoned.” It’s just the guys playing the song in a field, but the production and editing quality are really good, and it’s fun to see them playing this shit — proof that human beings are actually doing it. Go ahead, drill your brain, and have a nice day.  (Sorry for the fucking ad at the start of this vid, but it’s short.)