As for those stylistic variations, the album includes thrash-metal stylings, sometimes mixed with hard-rock chords and drum fills (“Attack the Gods”), metal-infused punk rock rhythms (“Let’s Kill These Motherfuckers”), old-school death-metal riffs that could be straight out of Metalocalypse or Wolverine Blues-era Entombed (“Riders of Skullhammer”), stripped-down, blackened metal with plenty of tremolo-picked chords (“Goatstorm”), and sometimes combinations of almost all the above (“Blood From the Witch’s Vein,” “We Are Hades”).  (more after the jump, including a song to stream . . .) 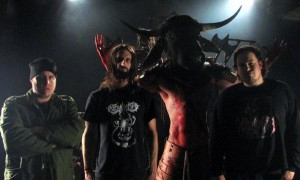 And let’s not forget the nasty, down-tempo sludge in “Death March of the Conquerors” and “The Violent Iron Age of Man.”

Steve Rathbone has such an adaptable extreme-metal voice that he can handle all of these stylistic variations with aplomb. Depending on the song, he’s giving voice to deep-throated yowls and proclamations (reminiscent, indeed, of LG Petrov’s vocals on Wolverine Blues), evil shrieking that sounds like claws carving through panes of glass, and even a few death-metal gutturals. He sings with power of war, battle, rebellion, death, and hell.

And as we mentioned above, the dude can also play some mean chainsaw metal guitar, but he gets plenty of help from the fuzzed-out heavy-metal riffing of bassist Nate Olp and the blast-beat-free drumming of Chris Wozniak. They can shift styles as well as Rathbone without sacrificing that no-holds-barred bloody-mindedness that infuses all the songs.

No one would accuse Evil Power of being sophisticated or cerebral.  Like we said, it’s simple, blunt-force trauma. But there’s still a kind of genius at work behind this album — the kind that knows how to deliver thick, neck-snapping riffage and heavy rock rhythms with a “fuck you” sneer.

The songs are short, and we really weren’t ready for any one of them to end. The one we picked for you to stream is a tale of rebellion and insane revenge, but despite the graphic gruesomeness of the lyrics, it still makes us smile. You’ll see why. When you get so pissed off about something you think you’re gonna explode, just crank this baby up and let it all out. (Lyrics follow after the link, because we know you’re gonna want to sing along.)

Lair of the Minotaur: Let\’s Kill These Motherfuckers

We fought for this
I bled for this
Death strike. Take all of their lives
Mutilate and burn them alive
Make a pile and hack them with saws
Behead the mother while the children are mauled
Terminate the whole family tree
Impaled bodies all line the street
Rape and torch and cut and drink up
Penetrated by the sword of blood