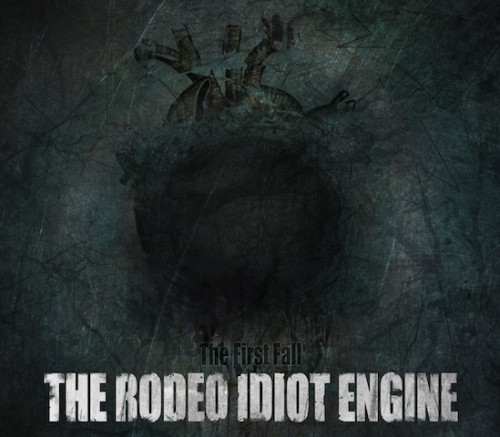 The Rodeo Idiot Engine is a metal band from the Basque Country (Euskall Herria) — that cultural region that spans the border between France and Spain on the Atlantic-coast side of the Pyrenees Mountains.

Man, you gotta love the name of this band. It describes so many human phenomena, and so many people. It metaphorically captures that device inside lots of homo sapiens (mainly the ones with testosterone) that makes them want to do ridiculous things like climb on red-eyed bulls and try to hang on for just a little while — and avoid getting stomped to death in the process — or play in extreme metal bands.

They’ve just finished their debut EP, The First Fall — six songs of barely controlled mayhem clocking in at about 15 minutes total. The band’s influences shine through the music (at least as we hear it) — The Dillinger Escape Plan, Converge, and Coalesce — except not even a hint of clean singing.

If you can wrap your mind around an amalgamation of those sounds, The First Fall is something you might want to check out. It’s an audio onslaught of mathcore tempo jaunts, insanely furious vocals, and a distorted, thud-heavy low end that sets up a harmonic vibration in your lower gut.  In two words, it’s fucking cool.  (more after the jump, including a song to stream . . .) 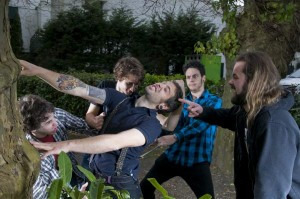 Here at NCS, we kinda wear our hearts on our sleeves, and we’ve got a particular soft spot for DIY bands that are trying to break out, especially when they come from places that aren’t the most hospitable launching pads for extreme metal bands.

But that only takes us so far. The music has got to take us the rest of the way, and what we hear on The First Fall takes us pretty far.

Tempos and time signatures veer unpredictably and fight each other for dominance. Rhythms start, stop, and shudder. Guitars whirl and whine. The vocals shriek with vein-bursting passion. And within that blaze of mathcore mayhem, infectious grooves periodically leap out and grab you.

Although anarchy is the name of the game, the band also adds some spices to this big hot-plate of mathematical hardcore. There’s a little industrial music in the intro to “Another Day in Rodeo Life,” a little jazzy bass riff going on elsewhere in the same song, a distorted guitar melody in “The Testament of William Jay Williams,” and a dash of sludgy chords in “Good Road Johnny Vacance.”

Right now, the Rodeo Idiot Engine are feeling their way forward, wearing their influences on their sleeves. That’s not a put-down — because they’ve got some sick jams going on in The First Fall. But we think there are seeds in this earth that could blossom into something even more attention-grabbing, because these young dudes have got the technical chops and the creativity to blaze some original trails.

Four of the six songs on The First Fall are up on the band’s MySpace page (here’s a link). Check it out and make your own judgment.  Or, watch this video of The Rodeo Idiot Engine performing “Tightening”. Not only is their sound reminiscent of DEP, they fly around like DEP too.

If you like what you hear, you can get the EP at this location.

P.S. If you visit the Rodeo Idiot Engine MySpace page, and you look at the box where the band identifies its location, you’ll see the names of towns in the Basque Country. You’ll also see “Svalbard and Jan Mayen Islands.” We had to look that up. Those are islands inside the Arctic Circle — the northern-most part of Norway.

We stupidly thought maybe the band actually included a transplant from that frigid region. So we asked the band’s guitarist Allian, and got corrected. No one in the band is from Svalbard and Jan Mayen.  But because the Basque Country doesn’t exist as a nation, Basque bands use little place names like that one “to prove that Basque Country is not France nor Spain.”

We have a feeling there’s a helluva lot more we don’t know about the Basque Country. Need to go there some day.