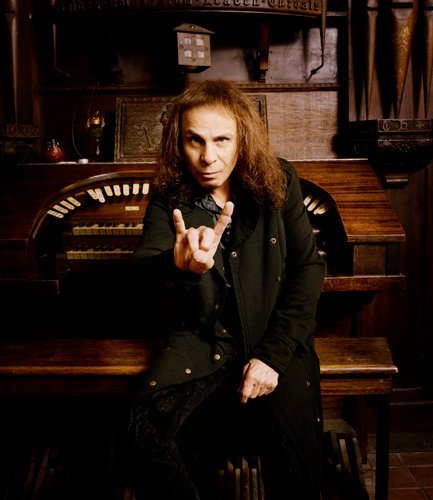 Today my heart is broken, Ronnie passed away at 7:45am 16th May. Many, many friends and family were able to say their private good-byes before he peacefully passed away. Ronnie knew how much he was loved by all. We so appreciate the love and support that you have all given us. Please give us a few days of privacy to deal with this terrible loss. Please know he loved you all and his music will live on forever.

(Excerpts from the Associated Press story about Dio’s passing follow after the jump . . .)

Ronnie James Dio, whose soaring vocals, poetic lyrics and mythic tales of a never-ending struggle between good and evil broke new ground in heavy metal, died Sunday, according to a statement from his wife and manager. He was 67.

Dio revealed last summer that he was suffering from stomach cancer shortly after wrapping up a tour in Atlantic City, N.J., with the latest incarnation of Black Sabbath, under the name Heaven And Hell.

The statement was confirmed by Los Angeles publicist Maureen O’Connor. Dio was being treated at a Houston hospital, according to his site.

Though Dio had recently undergone his seventh chemotherapy treatment, he was hopeful to perform again. Earlier this month, Heaven And Hell canceled its summer tour, but Dio did not view being sidelined as a permanent thing.

“Wendy, my doctors and I have worked so hard to make it happen for all of you, the ones we care so much about, that this setback could be devastating, but we will not let it be,” he said in a statement. “With your continued love and support, we … will carry on and thrive. There will be other tours, more music, more life and much more magic.”

Dio rose to fame in 1975 as the first lead singer of Rainbow, the heavy metal band put together by guitarist Ritchie Blackmore, who had just quit Deep Purple.

Dio then replaced legendary vocalist Ozzy Osbourne in Black Sabbath in 1980 with the critically acclaimed album “Heaven And Hell,” considered by many critics to be one of the finest heavy metal albums of all time. His on-again, off-again tenure with Black Sabbath touched off an intense debate among fans as to which singer was the true essence of the band — a discussion that lasted until his death.

He also enjoyed a successful solo career with his self-titled band, Dio, in between his three stints with Black Sabbath (1980-82; 1992; and 2007-2009, when the band toured as Heaven And Hell, to differentiate it from Osbourne-led versions of Sabbath).

Many of his most memorable songs revolved around the struggle between good and evil, including his signature tune “Heaven And Hell.” He also drew heavily on medieval imagery in songs like “Neon Knights,” “Killing The Dragon” and “Stargazer.”

“He possessed one of the greatest voices in all of heavy metal, and had a heart to match it,” said Twisted Sister guitarist Jay Jay French, whose band toured with Dio since 1983, and was to do so again this summer at European rock festivals. “He was the nicest, classiest person you would ever want to meet.”