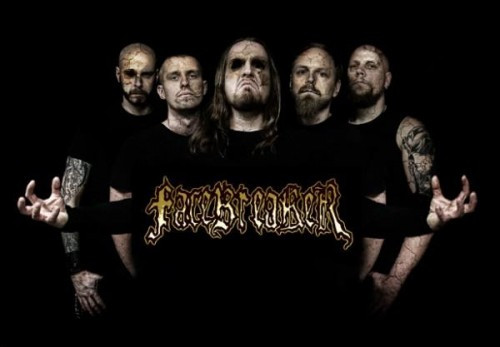 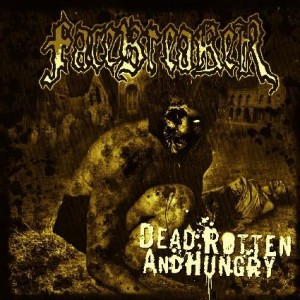 The band’s latest album crawled out of the grave in 2008 with the title Dead, Rotten and Hungry, and the songs are indeed about zombies, with such mouth-watering titles as “Slowly Rotting”, “Night of the Burning Dead”, and Unanimated Flesh”. And the sound is indeed classic Swedish death metal, in the vein of Dismember and Grave. It’s punishing, but with meaty hooks — rusty chainsaws spinning at full speed and flinging gore in every direction, plus suitably demented guttural vocals. We like it!  (more after the jump, including music to stream . . .)

On April 13, Facebreaker announced on its MySpace blog that it had signed a deal with the Cyclone Empire label. The band is working on its third album (to be called Infected) for a projected release sometime this summer. Here’s a track for you to stream from 2008’s Dead, Rotten and Hungry. Facebreaker’s music is available on iTunes. 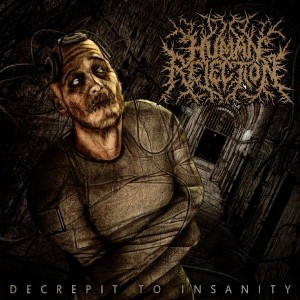 The music falls into the category of slam metal — the kind of ultra-brutal death metal pioneered by Devourment. The band’s main objective seems to be to take your head and pound it on a rock until it splits like a grape. The music is fast, super-distorted, and technical, with slamming guitar riffs, nail-gunner drumming, and vocals that consist exclusively of pig squeals — and it’s got those lurching slam breakdowns, where the tempo slows to a zombified crawl without losing any of the music’s brute-force impact.

Sure, listening to this stuff for too long will turn your brain into porridge, but man, there’s some fun to be had on your way to oblivion. Check out a sample from Decrepit to Insanity via the link below. Human Rejection is now working on their third album. 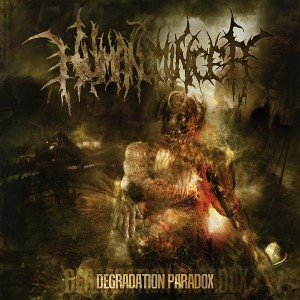 Human Mincer is from Madrid, Spain, and released their third album, Degradation Paradox, last year. Like the first two bands in this montage, Human Mincer doesn’t fuck around. The axes grind like industrial machines in need of lubricant, the drums pound mercilessly with inhuman speed, and pig squeals and shrieking are the order of the day in the vocal department. The rhythms leap from one time signature to another in rapid succession as the nimble-fingered guitarist and bassist go berserk on their instruments.

Mixing grindcore, death metal, and slam, Human Mincer shakes you by the scruff of your neck with brutal efficiency, waiting to see what comes out your ears and nose. Their music is available on iTunes, and doubtless elsewhere.

For your listening pleasure, here’s the title track to Degradation Paradox:

Well, our cat is cowering in the corner, and we’ve developed a taste for human flesh for breakfast. So, we’re gonna go prowl the streets in search of food. See you tomorrow.