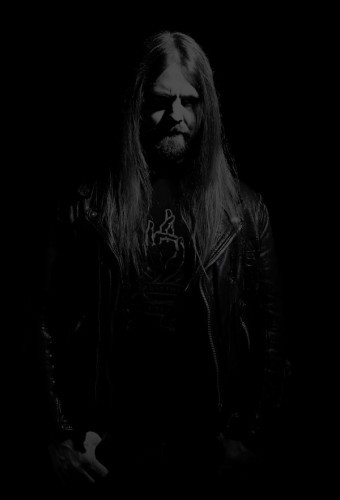 I’ve been thinking. If I were in an extreme metal band and I were in charge of picking the name for our new album, would I choose “Curse of the Cunt”? Would you? Well, the subject of tomorrow’s post did (and it wasn’t Fred Estby, the dude pictured above). So, continue to meditate about that question between now and then, won’t you?

The theme of today’s post is not curses or cunts, but strays. We’re not talking about cats and dogs, just stray music that got under our feet and tripped us up as we were trying to go about our daily business. These strays have got our attention now, but we still haven’t made up our minds about whether we’ll feed ’em and let ’em come inside for a longer visit.

If you already know about either of the following bands that contributed this stray music, raise your hand:  Necronaut, Cyphosis.

Ah, fuck. We can’t see your hands. Guess we’ll just have to assume you didn’t raise them, and carry on.

It was the pedigree of this stray that caught our attention. We’ll just throw out some associated names and see if you have a similar reaction: Dismember, Carnage, Autopsy, Nifelheim, Disfear, Entombed. So, did that get you interested? (more after the jump . . .) 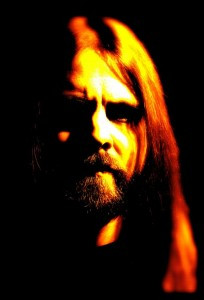 Ah, fuck, we can’t hear you either. Guess we’ll just have to assume you said yes, and carry on.

So, Necronaut is the solo project of Fred Estby, the former drummer for Dismember and Carnage. In 2008, he started writing and recording songs, with the idea of getting a variety of different vocalists to collaborate, plus other guest musicians. And that’s what he did.

Here are the vocalists who participated in the Necronaut project:

And here are the guitarists that Estby persuaded to add solos:

We’re familiar with enough of these names to know there are some deep roots underneath this project. And then on top of that, we saw this description in a press release:

The band’s approach is crude and dead simple, a la early Bathory and Venom mutated with Black Sabbath and Iron Maiden, but with an unorthodox bass-heavy production that allows the album to stand out amongst its peers.

Just gets more and more interesting, no? Certainly did for us, particularly since “crude” and “dead simple” are our middle names.

You can hear two songs streaming on the Necronaut MySpace page — “In Dark Tribute” (featuring Hellbutcher and Tyrant) and “Infecting Madness” (with Chris Reifert and Uffe Cederlund). And guess what? They’re crude and dead simple — and that’s not a put-down.

They’re throw-backs to early days of Swedish death metal, with elements of what ultimately evolved into a separate black-metal genre. And the differences in vocals and guitars create some interesting variety in the sound. We’re diggin’ it.

We’ll see what the rest of this interesting project produces when the whole album drops. Necronaut’s self-titled debut is due for a September 2010 release on Regain Records. 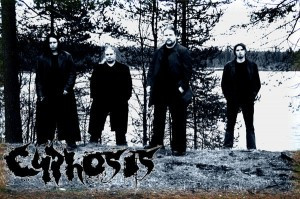 Cyphosis is from Finland.  Of course they are. Finland produces so many extreme metal bands for such a relatively small nation that every Finnish family includes at least one band member. We heard it’s legally required.

Cyphosis has an album (their second) called “To North and Under” that’s projected for release sometime this fall by Violent Journey Records, with whom the band has just signed.

One song from that album, “Time Is An Enemy”, is streaming on the Cyphosis MySpace page and it’s also available for download at that same location.

And we’re diggin’ it. We’re diggin’ it even though most of the vocals are of the near-clean-singing variety (it includes some vicious snarls, too). It’s catchy and heavy and . . . well, see for yourself.

Cyphosis: Time Is An Enemy

One Response to “STRAYS”