I’ve confessed before that I’m a relative newcomer to the charms of black metal, though I’ve found a lot to like and we’ve written about black-metal releases pretty frequently at this site. When I received a copy of the new release by Enthroned, I decided I really needed to listen to it carefully.

Why? Partly because (with some lineup changes) this Belgian band has been around for 17 years and partly because Enthroned has announced their first U.S. tour in almost a decade — and one of the stops is at our home base of Seattle. (We’ve got the full list of tour dates after the jump.)

So, I’ve been listening to Pentagrammaton — the band’s ninth studio album — and it continues to reverberate in my head even when I’m not consciously thinking about it.  It has become one of my favorite black-metal releases of the year.  I’ll try to explain why, and maybe that will help you decide whether it’s worth checking out.

The first thing that struck me was the production style. Now, to put this in context, lately I’ve been listening to a lot of death metal with “modern” production values — sharp, clear, and with an emphasis in the mix on a powerful low-end, with prominent drums, bass, and hammering rhythm guitar riffage.

Pentagrammaton is a different breed of cat. The production yields a fusion of the instruments in a shifting wall of sound, with a deemphasis on the low end of the register. The bass segment of the sonic spectrum is almost non-existent in every respect. Even in the drumming — which by the way is insanely pyrotechical — the heavy sound of the kick drums and toms are dialed into the background of the mix. Most of the time they sound like the muffled thunder of a distant storm.  (more after the jump, including a song to hear . . .) 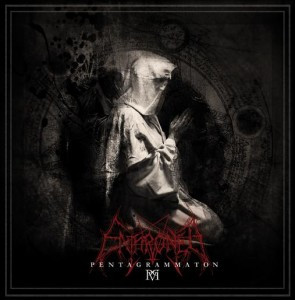 A few songs, such as “Ornament of Grace”, include some chugging guitar rhythms, but for the most part the guitar work, too, is a blaze of tremolo-picked chords in the higher register of the scale.

This “old school” style of production is undoubtedly a conscious choice by the band, and dovetails with the presumed objective of the music. You can’t say the objective is to generate a more natural, organic sound, because I have to believe the low end of the instrumentation would be more prominent in the recording studio or on stage than what you hear on this CD.

Instead, what I infer is that the band was either deliberately trying to connect their sound to an earlier day when a “tinnier” sound was simply the best you could pull off as an underground band, or they were focusing their efforts (successfully) on creating a sonic hailstorm of shrieking malevolence.

Pentagrammaton howls in a borderline-deranged outburst of fury, with only rare breakdowns (as in the title track and “The Essential Chaos”) and well-timed departures from the blast beats to provide relief from the clawing assault. The tremolo-picking infuses the songs with dissonant melodies that are both dark and feverish — the soundtrack to a breakneck charge through a demonic landscape — and those intense, swarming chords can become transfixing as they crash over you, one rolling wave after another. 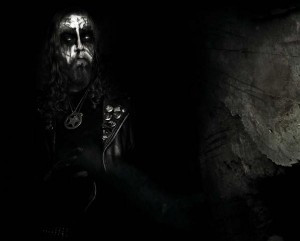 The raging vocals amplify the fearsomeness of the attack. Sharp-edged shrieking that’s both passionate and chillingly cold predominates, but occasionally gives way to cavernous gutturals, foreboding chants, and eerie whispers.

There’s one, seemingly obligatory long song (“Unconscious Minds” at almost 9 minutes), but it reflects the biggest departure from the template of the rest of the album with more pronounced rhythmic riffing and bursts of psychedelic guitar soloing.

I do find this album fascinating, particularly the rough-and-raw guitar work that both generates a wind-tunnel of shrieking chaos and also jumps and bolts like a wild mustang in a corral.

Here’s a track you can take out for a spin around the block.

And here are the North American stops on Enthroned’s 2010 world tour: