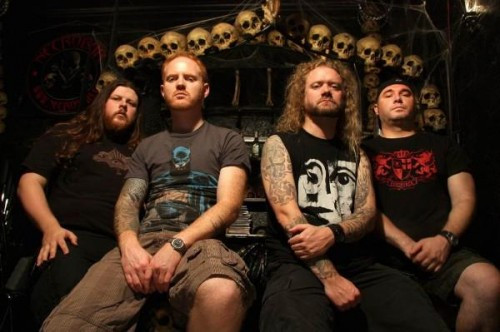 Criminal was formed in Santiago, Chile, in the early 90s. They play a blend of thrash and melodic death metal. In February 2009, they released their latest album, White Hell, on Germany’s Massacre Records. In January of this year, they supported Metallica in an open-air concert in Santiago that drew over 55,000 fans.

We’d never listened to Criminal until yesterday, when we randomly decided to check out a new video they’ve released for a song from White Hell called “Incubus”. The video was directed and edited by a Chilean visual artist named Carlos Toro, who has previously worked with Kreator, Vader, Lacrimosa, and Mercenary, among others.

The song itself is pretty good — good enough to interest us in checking out the rest of White Hell. But the video? We’re still trying to make up our minds about it, cuz it’s fucking creepy.

The camera work, special effects, and editing are high-quality. The shots cut back and forth between the band hammering out “Incubus”, some kind of spiraling thing swirling into the air among the band members, and some extremely disturbing scenes of a partially dressed (or totally undressed) old man writhing in agony.

And what’s making him writhe in agony? Someone who doesn’t dig this song might say it’s the music. Or it could be a visual metaphor about the way old people in general react to extreme metal. Or it could be what’s going on underneath this old dude’s wrinkly skin. We’ll let you figure it out for yourselves, after the jump . . . .