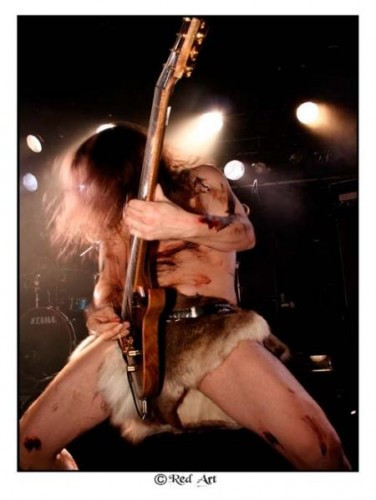 The metal world is filled to overflowing with diverse awesomeness. But lately we’ve been thinking that even with 15 gajillion subgenres, something was still missing, that what we really still needed was  . . . . . . . some contemporary primal caveman death metal!

And then yesterday we discovered a Norwegian band called Goat the Head. And you’ll never guess.

They describe their music as “contemporary primal caveman death metal!” What a fucking amazing coincidence! And to think, some people say there’s no such thing as miracles.

Now, we can hear you saying, “Big deal, there’s lots of metal bands that wear skins.” And sure, you can find some pagan/folk-metal bands like Turisas that wear skins, but Goat the Head ain’t pagan or folk. They’re fucking prehistoric.

But prehistoric in a contemporary way. Really, they are. Kind of like cavemen who occasionally wear spacesuits. We’ll prove it to you. And it will be worth your time, because the music is raucous and weird and skull-crushing — in a primal caveman kind of way.  But contemporary.

So, after the jump, we have two songs from the band’s forthcoming second album, one of which is available for free download. You listen to this and you’ll develop a taste for mastodon (and we don’t mean the band).  Oh yeah, we’ve also got a Goat the Head video that’s a truly inspired piece of lunacy with one hell of an ending. (stay with us after the jump . . .) 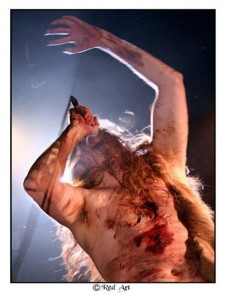 Musically brutal, uncouth and coarse in appearance, the Trondheim-based band embodies nature at its worst.

Their penchant for keeping it “simple and organic” also reflects in their live shows that are peppered with nudity and primitive rituals.

Now you’re talkin’! We’ve been achin’ for a live death metal show that’s peppered with coarseness, nudity, and primitive rituals. Another prayer answered! Only thing is, Trondheim is so goddamned far away from Seattle.

Fortunately, we can at least hear the music, even if we can’t see the coarseness and nudity. And as it happens, Goat the Head will be releasing their second full-length album, Doppelgängers, on September 13 via Aftermath Music. Amazingly, the CD was mixed and mastered by the famed Tue Madsen (Behemoth, Kataklysm, The Haunted) at his Antfarm Studio in Århus, Denmark.

We had no idea he worked with cavemen.

And as it happens, you can hear a few of the songs fron Doppelgängers right fucking now. Like the title track, “Neolithic Rocket Science”.  See, I told you — cavemen who sometimes wear space suits!

This song will kick your ass all the way back to the Neolithic. Check it out:

There’s another song from the album-to-be that you need to hear. It’s called “This Tube Is the Gospel”. We wish to hell we knew what that song title means. We do have some ideas, but they’re probably better left unspoken.

“This Tube Is the Gospel” is a different animal from “Neolithic Rocket Science”.  It’s also got a heavy, hammering beat that just blasts you in the face.  But sprinkled throughout it are unexpected vocal surprises — a strong-voiced female singer belting out a power-metal anthem, a death-metal clean-singing voice (if you can imagine that), and what comes perilously close to rap. We can’t think of anything else that sounds quite like it.

The female vocals are supplied by Kirsti Huke, who doesn’t appear to be a metal vocalist by trade. But she delivers the goods. And talk about beauty and the beasts — where’s a photo of Kirsti with the animals in Goat the Head?

So anyway, here’s that track for you to stream. We know you’re gonna have opinions about this one, so let’s have some comments please!

Goat the Head: This Tube Is the Gospel

You can download your own free digital copy of “This Tube is the Gospel” at the band’s MySpace page (here). When you get there, right-click on the link and select “save as” from the menu.

Last, but certainly — certainly — not least, check out this video called “Darwinian Minions”. It’s not new, and it’s more of a teaser than a song, since there’s only a burst of music near the end. But it’s brilliant, in a cave-manish kind of demented brilliance, and it do have a cool finish to it. 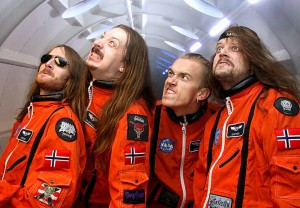 So, to wrap this up, we’re guessing that somewhere in the back of your head, or maybe even in the front of it, you’re wondering about the band’s name. We haven’t taken the time to do actual research on where the name came from. It’s more fun to engage in rank speculation than search for actual facts.

And our hypothesis is that “Goat the Head” is just a poor translation from the Nordic tongue, and that what the name really means in English is something like “Severed Goathead” or “Satanic Cranium” or “Head the Goat” or “Goat-Ruptured Scrotum” or something suitably brutal like that.

Or we could be wrong, and the name really means what it says, and it capture’s a caveman’s exclamation upon seeing what the cavewoman has fixed for dinner. But in a contemporary way.

14 Responses to “GOAT THE HEAD”