The Crown is back.

Knew they had re-formed. Knew they’ve made a new album. Coming out on September 27. On Century Media.

Now I know. Just listened to it. More than once. Kinda out of breath now.

About The Crown: The band was founded in 1990 in Trollhättan, Sweden, under the name Crown Of Thorns but had to change their name to The Crown in 1998. 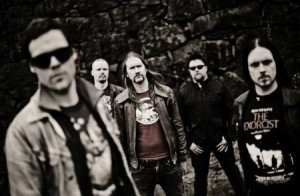 They put out their first album in 1999, called Hell Is Here. The second one, Deathrace King, was released the next year, and included guest vocals by Tomas Lindberg (At the Gates) on “Devil Gate Ride”. Lindberg then replaced original vocalist Johan Lindstrand on Crowned In Terror (2002), the band’s third album.

Lindstrom returned to the band for the fourth album, 2003’s Possessed 13. And the band also decided to re-record Crowned In Terror with Lindstrom on vocals, and released the revised album in 2004 under the name Crowned Unholy. The same year, the band broke up. Lindstrom then started a band called One Man Army and the Undead Quartet (which btw has put out some awesome music and has a new album on the way).

In 2008, the entire line-up other than Lindstrom formed a new band with Andreas Bergh (Swordmaster) called Dobermann. Vocalist Jonas Stålhammar (God Macabre) later replaced Bergh, and in December 2009 they changed the name of the project to The Crown.

Okay, enough data for all the true metalhead geeks out there. The salient point is this: Possessed 13 was, in our humble opinion, a landmark album in the discography of Swedish death metal. Seven years later, it still sounds awesome.

So we are stoked about the fact that The Crown is back and are on the verge of releasing a new album. Will it be as good as Possessed 13? We’ll see.

But two days ago the band put up a new song from that album, and it’s solid. It’s more than solid. It’s Metal Fucking Death.

12 Responses to “THE CROWN. THE CROWN? THE CROWN!”