But despite the increasing extremity of my tastes, I still like Dagoba, even though I was a bit disappointed in the next album, Face the Colossus, because it featured more clean singing and a less extreme sound overall. I certainly still like them well enough to be interested in the album they’ve got coming out on August 30 — Poseidon.

Besides, they’re from France. Maybe not as foolproof a recommendation as if they were from Finland, but French metal is pretty fucking good these days.

But as interested as I am, I obviously haven’t been on my toes, because I didn’t know until a few minutes ago that they’ve already officially released one song from the album (“Black Smoker”) and that a second song (“Waves of Doom”) has been leaked onto YouTube.  (“Thank-you” to the more-on-his-toes deseee at the most excellent The Number of the Blog for posting about these two tracks.)

Of the two, I much prefer the leaked song, because, well, it’s more extreme. But “Black Smoker” is decent, too. Both songs are after the jump, plus more of the amazing artwork created for the new album . . . 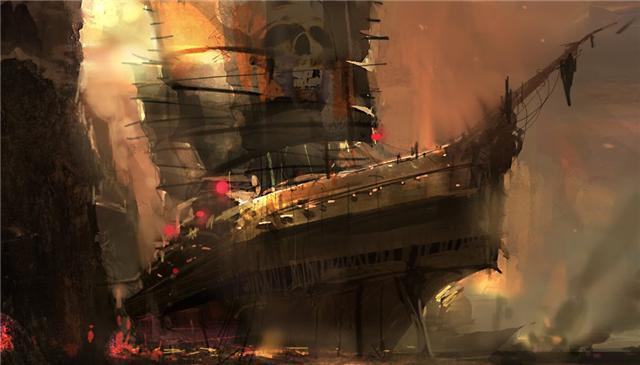 The art is pretty hot, huh?  It’s by Cecil Kim.  For you gamers out there, he did the concept art for God of War III.

The first piece of music by Dagoba that we’re putting up from the new album is the leaked song. It was included on a sampler distributed by Metallian magazine not long ago, and that’s probably where the file came from. It’s good shit. As desee helpfully pointed out in his post, the song loops twice on this YouTube clip, so you can stop at about the 4:30 mark if you don’t want to hear it twice.

And here’s the official promo piece from the new album, which is the song “Black Smoker”. I’m not as crazy about this one because it’s mainly clean singing (see the name of this blog) — but I have to admit, the vocalist (Shawter) has got good metal pipes.