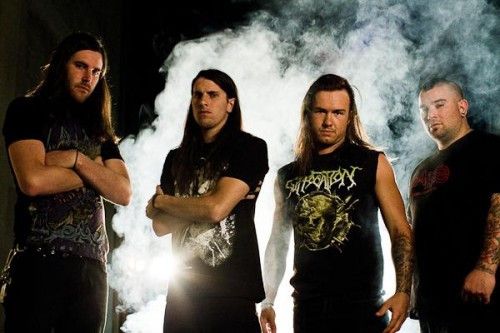 Now that the mystery has been resolved, we’ll run our review again with all the camouflage removed. If you read the earlier review with the identity concealed and aren’t interested in reading it again, even with some details revealed, we’ve added something new at the end of the post (after the jump) under the heading “NEW STUFF”.  As always, feel free to flame or praise or yawn in the comments . . .

The three perpetrators of this site first saw Impending Doom as the headline act in a small, crappy little club in Portland that hadn’t been cleaned since Ronald Reagan was president. The whole place was scarred, and every surface was sticky. It was pretty full, which didn’t take a lot. There was hardly any room to move. That night, Impending Doom owned the place. The performance was explosive, and the performers had magnetic stage presence.

We saw ’em again on another national tour the next year in Seattle at a much larger, nicer club where they weren’t the headline act. They played again with explosive energy, just blew the crowd away. The other bands (August Burns Red and The Acacia Strain) were bigger names, but Impending Doom damn-near stole the show. It was like some big muscle car going full-throttle, with the tachometer in the red zone.

They’ve just released a new album, There Will Be Violence — their third, and it’s a step ahead, and a slight step sideways, from the band’s previous work. It’s brutal, it’s catchy, it’s unusually melodic, and most of it is a flat-out headbanging barrage of full-force fury. 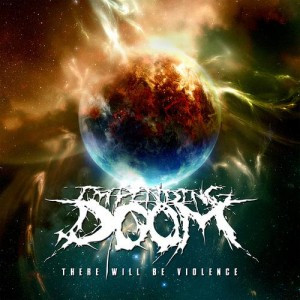 Somewhere along the way, Impending Doom got tagged by some people with the “deathcore” label. The label wasn’t entirely unfair, because (particularly on the last album) the band has been partial to massively down-tuned, clanging riffs, large doses of double-bass, and the general rhythmic pattern of deathcore, including mammoth breakdowns.

But the band’s two previous releases have also included some unexpected variation from the pattern, and a healthy dose of honest, straight-ahead death metal.

Fans familiar with the band’s previous albums will certainly recognize the third one. It’s still loaded with down-tuned, jackhammer riffing, frenetic drumwork full-forward in the mix, and an assortment of roof-collapsing breakdowns (there’s a doozy on “The Great Fear”).

But changes are also in evidence. The band’s distinctive vocalist Brook Reeves has shifted to a much more pronounced hardcore style of testosterone-injected howling, reminiscent (at least to us) of Darkest Hour‘s vocalist, John Henry. The deep gutturals aren’t gone, but they’re used more sparingly.

The band’s music has always been a fusion of hardcore and death metal with a healthy dose of thrash, but perhaps as a result of the altered vocal style, several of the songs on this album have a more pronounced hardcore vibe than we remember from the previous albums (particularly “The Son Is Mine” and “Children of Wrath”).

As compared to previous efforts, the songs on the new album also reflect greater tempo dynamics and more frequent use of melodic guitar leads and solos, and indeed, the tracks that work best are those that change course in unexpected ways, whether it be the slower-paced instrumental in the middle of “The Great Fear” or the swirling guitar leads that carry the mid-tempo “Sweating Blood” or the start-stop, techie hammering that infuses “Peace Illusion”. 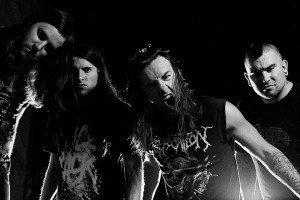 The album also includes a haunting instrumental (“Love Has Risen”) that starts with an almost sludgy opening riff and includes an almost bluesy dual guitar lead in the middle (with the drumming backed down), and a soaring guitar anthem at the end.

Two well-known frontmen from other bands — Tim Lambesis (As I Lay Dying) and Vincent Bennett (The Acacia Strain) make guest appearances on two songs (“Orphans” and “The Great Fear”, respectively) and they add some new colors in their contributions.

But what pervades all the tracks except for that instrumental is a flood of passionate fury — the same kind of emotional onslaught that made those live performances we saw so riveting. These dudes aren’t posers. They’re invested heart and soul in what they’re doing, and that passion enlivens the music.

Here’s a track from the new album for you to stream:

More thoughts on why we hid the ball in our first review: 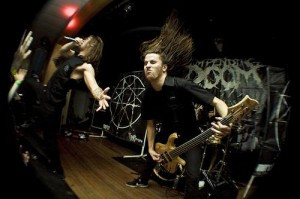 Ideas, beliefs, and feelings — whether wise or foolish, profound or mundane, malicious or beneficial — have inspired the creation of music since pre-history. Frankly, we’d rather listen to music that has its genesis in strongly held feelings of any kind than in a soulless calculation of how to generate cash or achieve popular notoriety.

But in the end, it’s the music that must stand or fall on its merits, regardless of where it came from. That’s why we tried in our first review to take all the controversy that surrounds Impending Doom in the metal community right out of the equation. We could have done that with many other bands. Just didn’t occur to us until now.

You can catch Impending Doom on this summer’s THRASH AND BURN tour (which has been the subject of a spirited debate in the comments on our original post about the tour at this location).

And now here’s a an official performance video of “More Than Conquerors”, a song from the band’s last album. It will give you an idea of the intensity that Impending Doom brings to a live show, from start to finish. IOHO, the song is hot shit too: