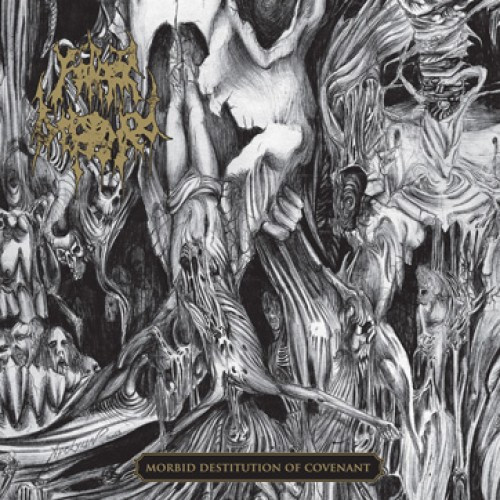 In one of yesterday’s posts, we briefly mentioned a band called Father Befouled. We wrote that we’d have more to say — and so we do.

Relapse Records announced earlier this week that it had signed the band for release of their new album, which is the second full-length, following 2008’s Obscurus Nex Cultus. In between, the band released a couple of EPs and appeared on a couple of splits, and suffered the suicide of their drummer (Antichristus). The new album — Morbid Destitution of Covenant — will be released September 14 on CD, but it’s already available digitally on iTunes (as is the first album) and elsewhere.

The band appears to be composed of people who now live in Chicago and in Georgia. In an interesting interview that pre-dated completion of the album (here), Father Defouled’s guitarist/vocalist Ghoat identified Incantation and Immolation as the band’s principal influences. If you’re familiar with the work of those bands, they will certainly spring to mind if you listen to Morbid Destitution, and seeing those names will give you an idea what the music sounds like.

Let me try to give you a further idea by stringing together a whole bunch of adjectives instead of using them in separate sentences. The music is: 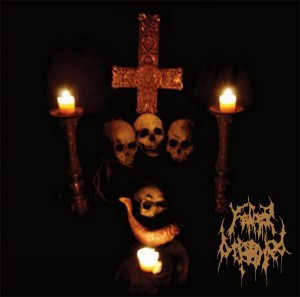 I didn’t immediately like this album — my own tastes lean more strongly toward faster, riff-laden death metal. But as I listened more, I came to like it. The question I’m still trying to answer is why.

The album begins with a short, ominous organ instrumental and ends with an almost 7-minute track (“Now Desecrated”) that consists almost entirely of the slow, hypnotic singing of a choir, slowly growing in volume, delivering what sounds like a medieval, Gregorian requiem.

In between are 9 songs that follow a repeating pattern. Each song alternates between up-tempo, black-metal style tremolo-picked chords and blast-beats, and massively down-shifted, trudging death-doom. The songs often segue immediately into each other without pause, and that’s part — but only part — of the reason why this album is less a collection of 11 distinct songs than it is one long song, designed simply to produce an emotional effect (see my original string of adjectives).

The main reason why this album feels like one long song is the inexorable pattern I mentioned above — the constant shifting back and forth between faster-passed passages heralded by the tremolo chords and blast-beats and the massively downtuned, ominously slow trudging of death-doom. Back and forth, over and again, from the beginning of the second song to the ending of the 10th.

In those slow, grinding passages, where the bass and rhythm guitar join in hammering out merciless, groaning chords and the drums thud with the rhythm of a funeral procession, the lead guitar line rarely consists of anything more than prolonged feedback or the needling sound of a European emergency-vehicle siren (“wheee-o, whee-o, whee-o”). There are a few howling guitar leads, but they are rare. 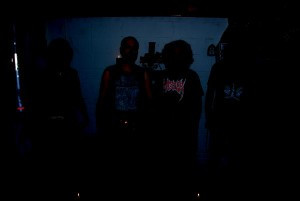 And then there are the vocals. Think of a foghorn, and then think of an even lower sound. Ghoat’s vocals are lower-than-low gutturals, monotonous, evil, and always slow-paced, even when the music hits one of those alternating up-tempo segments. They’re so low and so droning in quality that sometimes you don’t even notice them except as a background thrumming that enhances the doomed feeling of the music.

For most listeners, it would probably be enough to say that if you like this kind of music, you will like this album, and if you don’t, you won’t. Which is why I’m still scratching my head about my own reaction — because this kind of mostly plodding doom isn’t usually the brand of death metal I like.

I certainly don’t plan to start off every day listening to Morbid Destitution, even though I’ve warmed up to it (“warm” is probably the wrong word to use for this music). But I’ve come to admire Father Befouled’s success in achieving an overpowering emotional effect in the songs as a whole, and the almost perfect ending achieved by attaching that long choral lament at the end.

Here’s the same track we included in yesterday’s post for you to use as a signpost to the album’s direction: