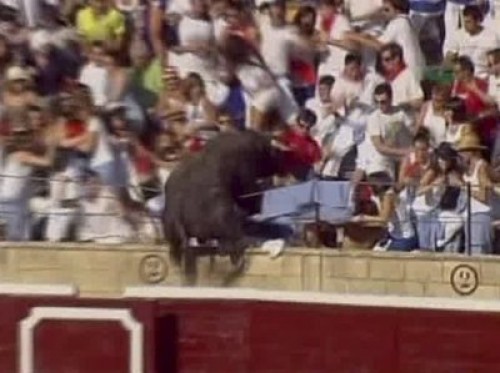 A mental chime reminded me that it was about time for another edition of “THAT’S METAL!“. Or it could have been the microwave announcing the readiness of another gourmet meal. Or possibly the sound of a beer can hitting a stack of empties.

Anyway, I decided it was time to venture timidly forth from my carefully maintained informational cocoon into the fearsome world of, gulp, hard news, to see if there might be something that would cause me to exclaim, “Shit! That’s metal!”, even though it’s not about music.

Sure enough, I found a few items — even though I had to wade through some typically depressing news about shit like wars, unemployment, environmental catastrophe, legislative stalemate, and crime, to get there. I try hard to remain ignorant about current events because it’s so fucking depressing/nauseating. But duty to our readers trumps depression and nausea every time!

I did find some nuggets in the cesspool of current events though. They involve a bull leaping a wall and rampaging through seated fans at a bullfight, new ways in which boobs can be used to score some quick cash, and driving without a license — and without a tire.

And of course, we include our usual tasteless commentary plus musical accompaniment  (after the jump . . .) 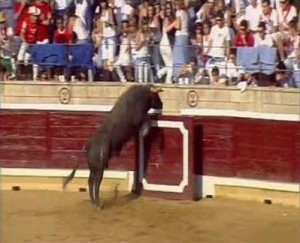 Our first story comes from Spain, where people have had a centuries-long love for bulls, and the killing of them for entertainment. In this story, the worm turns . . . 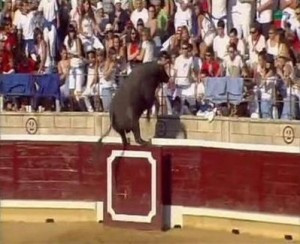 Video showed the bull jumping several meters (yards) high out of the ring, clearing two barriers before landing in the stands and raising a panic as he lurched through the screaming crowd, charging and tossing everything he could.

Well, gut me like a fish. I didn’t know bulls could jump. I guess if you torment them enough, they can. (Note to self: do not torment bulls.) Or maybe he just had a hankering for a cold beer and some roasted peanuts, or whatever vendors sell in Spanish bullrings. Wonder how this story ended?

The 500-kilogram (1,100-pound) animal was brought under control by experienced bull handlers after several minutes and later killed. 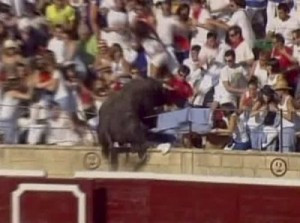 Oh.  Didn’t end too well for the bull.  Too bad.  Well, at least he went out of this world after a few glorious minutes of running amok.  That’s metal!

The incident occurred Wednesday at the Tafalla arena in the northern region of Navarra during an event attended by about 3,500 spectators, in which mostly young people try to get a bull to charge at them so they can dodge it. Unlike standard bullfights, the bulls are not killed in these events.

I was about to say, “that’s a serious fucking mosh pit,” until I focused on the part about dodging. Fuck is that? If you can’t take a brutal charge, stay out of the pit! At least it’s not a “standard bullfight,” in that they don’t kill the bull after they’ve had their fun — unless of course the bulls spoil the show by running amok in the stands. You run amok at a metal show, they just eject you from the venue.

There’s video of this event. All the excitement is over at about the :40 mark if you want to stop there. Be sure to look for the brain-dead boy grabbing the bull’s tail. 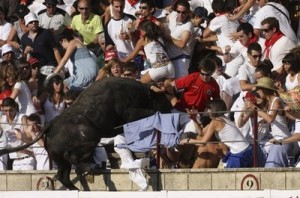 Our next story comes from Paris, where people have had a centuries-long love of boobs — and women continue to invent new uses for them . . .

The 14-year old girls were taken to the Paris prosecutor’s office to face charges while a 12 year-old accomplice was placed in a home, police said. 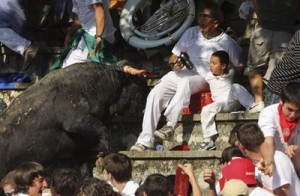 Well, skin me like a mink. I can understand why you might lose your composure at a cash machine if some girls walked up and flashed their boobs.  But 14 seems a bit young for this kind of thing, doesn’t it? And 12 years old? Surely, there are better ways for girls to rob people of cash at ATMs.

The girls first struck last week when they approached a man withdrawing cash from an automated teller machine (ATM) in the sixth district of Paris.

One of the girls tried to distract him by sticking a newspaper under his nose. When that failed, she opened her shirt and grabbed his crotch, while the other girl swiped 300 euros ($385).

I have to admit, sticking a newspaper under the nose of ATM customers wasn’t quite what I had in mind as an alternative robbery technique. I’m trying to imagine how this went down. Girl sticks newspaper under man’s nose. Man slaps away the newspaper and tells girl to fuck off. Girl then flashes her boobs and grabs man’s crotch. Man readily hands over cash to accomplice and asks for seconds. 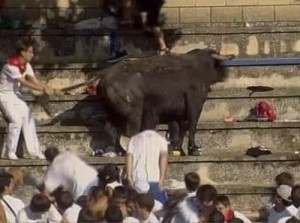 The girls struck again with the help of the 12-year old a few days later, using the same method to steal 500 euros from a woman.

They grabbed the woman’s crotch?

Our final story comes your way from western New York, near Buffalo, where people have had a centuries-long love of beer, and find new ways of fucking up when they love it too much.

BETHANY, N.Y. – Authorities said a western New York man whose license expired 33 years ago has been charged with driving while intoxicated after police said he drove a van 11 miles without one of its tires. The Genesee County Sheriff’s Office said another motorist reported seeing a tire falling off a van weaving on a road in Bethany late Monday night.

Deputies later arrested 61-year-old Duane Bush at his home in Bethany, 32 miles southwest of Rochester. Deputies said the van traveled 11 miles through the rural town without a rear right tire.

Bush was charged with aggravated DWI and unlicensed operation of a motor vehicle. Deputies said his blood-alcohol level was more than three times above the legal limit of .08 percent.

Well, boil me like a crawdad. Even if you didn’t know good ol’ Duane was 3x over the legal limit, you could pretty well figure out he was completely baked from the fact that he drove 11 miles with only 3 tires. I mean, shit, how do you not notice something like that?

There’s just no way of knowing how Duane’s pickled brain processed the fact that the rightward ass of his car was dragging on the highway, throwing up sparks like a fireworks display, but it had to be pretty fucking metal, in a completely mindless kind of way.

Driving for 33 years with an expired license is pretty extreme, too. Lots of people are forgetful, but dude! Duane sounds like maybe this wasn’t his first encounter with alcohol. Wonder what he looks like? 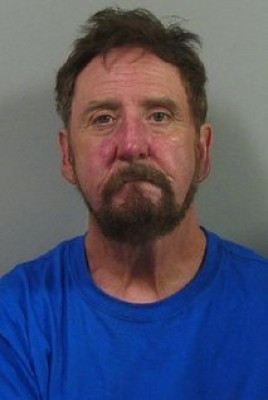 Yeah, I think my hunch was right.

That concludes this episode of “THAT’S METAL!” — except for the musical accompaniment. We’ve selected the following songs with today’s stories in mind. Bang yo head.