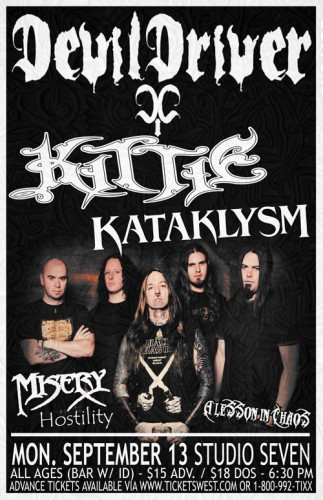 Two nights ago our NCS spiritual advisor Alexis and I dropped in to Studio Seven to catch Kataklysm in action. Neither one of us had any business hitting a metal club that night because we both had really early days ahead of us the next morning. But Kataklysm was on the bill, and only a case of amoebic dysentery would have kept me away.

Alexis hadn’t listened to Kataklysm before and she went along mainly to humor me. As a compromise, we arrived a bit late and left right after Kataklysm’s set — so we missed Kittie (who I was really curious to see) and DevilDriver (who we’ve seen before). Consequently, this is only a partial concert review, which is probably fitting — a half-assed review to match up with our typically half-assed photos.

And we do have lots of those — images of the first two bands we saw (Hostility and Misery), and of course a few handfuls of our better pics of the astounding Kataklysm. Our thoughts about the part of the show we saw, plus some other random thoughts, plus the photos, are after the jump . . .

It was a Monday night in Seattle during the third week in September. There are worse dates during the year for a metal show in Seattle, but not many. Nevertheless, there was a hearty crowd at Studio Seven. Not full, but full enough to provide the ingredients for a frothy pit to erupt during Kataklysm’s set. The extra room provided good viewing for Alexis and me, without having to get right up to the edge of the pit and risk bodily harm.

A surprisingly mellow crowd on the whole — until Kataklysm hit the stage. Beautiful night outside, too. Those must be treasured right now, because the weather will soon transform into full-fledged Seattle suckage.

The night (abbreviated for us) was a study in the progression of groove.

We missed the first band on the bill but caught all of Hostility‘s set. We’d never heard these Bay Area blasters before and didn’t know what to expect. What we got was a muscular display of thrash with Pantera-style strut. Loud and proud — but neither Alexis nor I loved it. Not nearly enough variety in the music, and if the songs had grooves, they were fleeting.

Next up was Long Island’s Misery — another band whose music we’d never heard. They served up a hard-hitting set with a less definable style, kind of a mix of thrash and hardcore and groove metal. Definitely a more sharply defined set of songs, with more compulsive rhythms than we got from Hostility and somewhat more variety in the songs.

My favorite was the closer of their set, “Hangover in Harlem”, which is apparently from Misery’s next album, due for release early next year. Mid-paced, melodic, infectious, with a cool drum-and-bass rhythm going on. Cool enough to put this album on our list of creations to watch for,

And then came the band I’ve been waiting to see for years: Kataklysm. And the progression of groove took a giant step forward.

Skin-tight instrumental integration, an explosion of kinetic energy, battlefield munitions going off, an immediate realization of where the “northern hyperblast” nickname originated, one headbanging convulsion after another. But above all else, a triumph of human capacity over technological wizardry. Almost anyone can sound like almost anything with the right software and the right know-how in the studio, but on stage if there ain’t no soul, it ain’t gonna last. And Kataklysm has heaps of soul in its dark, deadly heart.

So very, very cool to hear and see a band that realizes on stage the power of what it lays down in the studio, plus that extra something that can only come with the visceral connection of a live performance. And yes, the mosh pit whipped itself into a fine froth, and the temperature of Studio Seven elevated by at least 10 degrees.

Kataklysm included some old favorites (“As I Slither”, “In Shadows and Dust”, and “Like Angels Weeping”), plus two songs off Heaven’s Venom (“Push the Venom” and “Numb and Intoxicated”) and finished off an all-too abbreviated set with “Crippled and Broken”. My only disappointment was that they didn’t play one of those blackened, melodic variances from the band’s trademark sound, like “Suicide River” off the new album or “The Vultures Are Watching” off Prevail. But nothing is perfect, is it?

Biggest biceps seen at the show, including the Studio Seven bouncers: A tie between the frontmen for Kataklysm and Hostility (Maurizio Iacono and Greg Haran). It’s not like I spend time hunting for large biceps, but these were difficult to ignore.

MOST COMICAL MOMENTS OF THE NIGHT

We’ll get to this after our amateurish photos. And here they are! 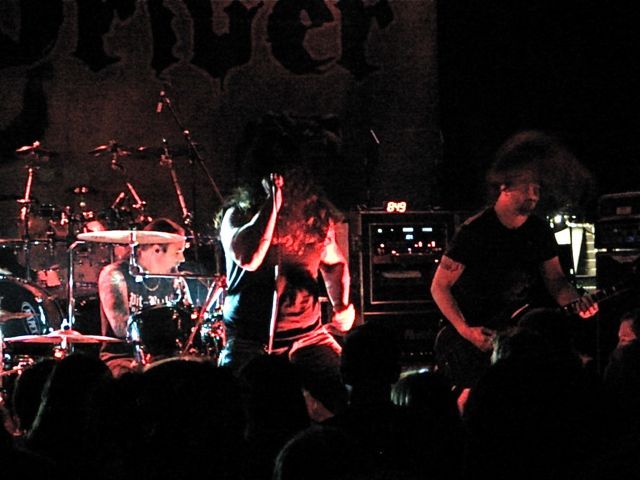 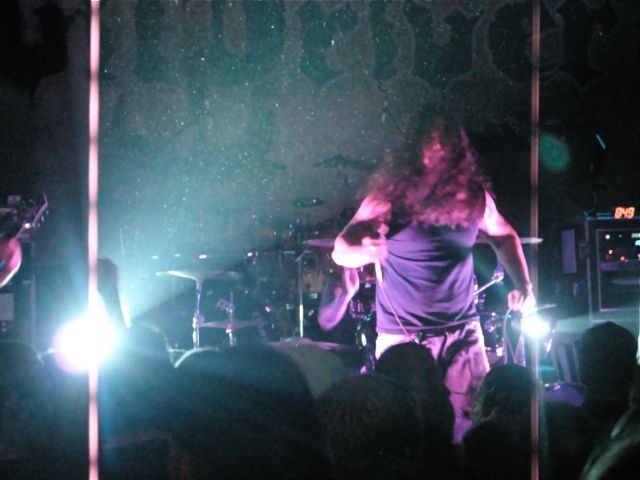 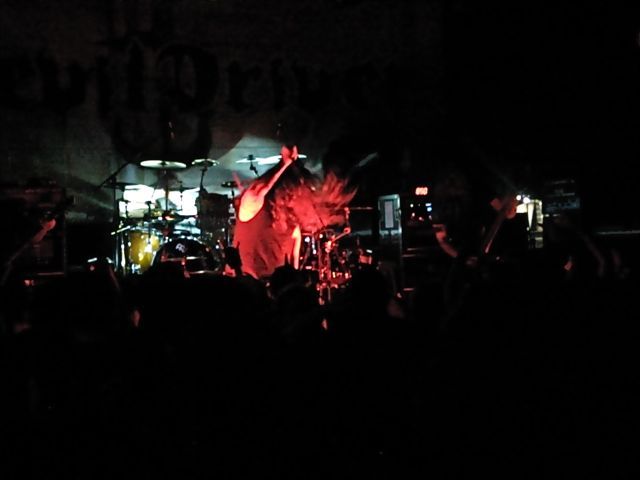 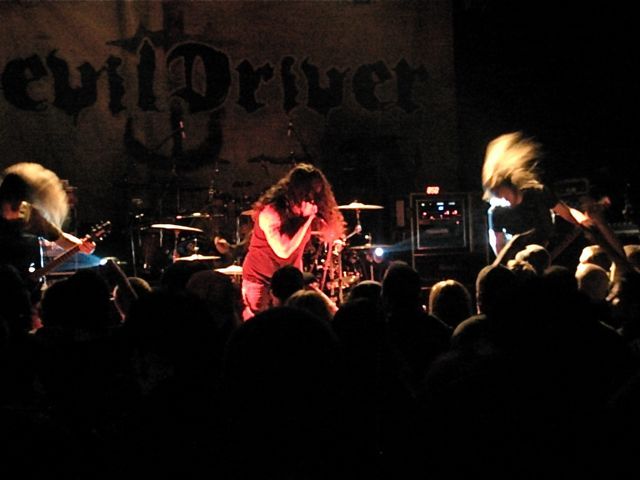 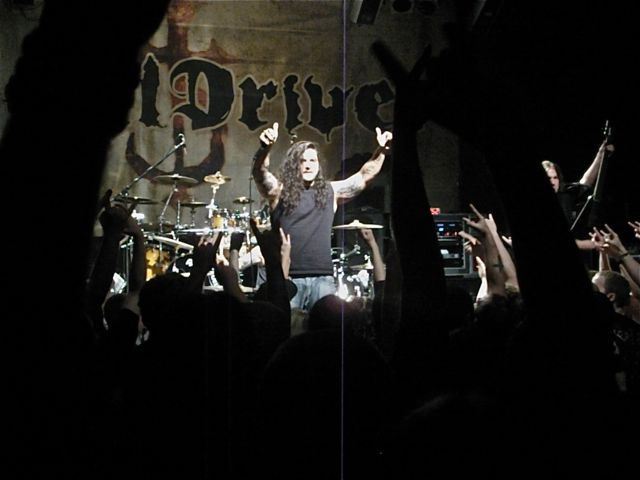 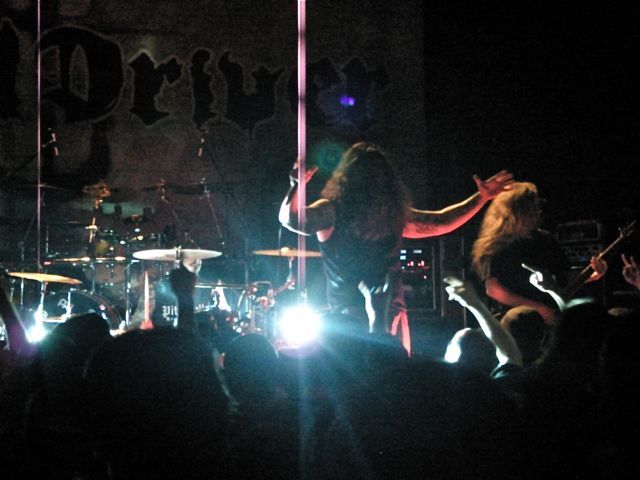 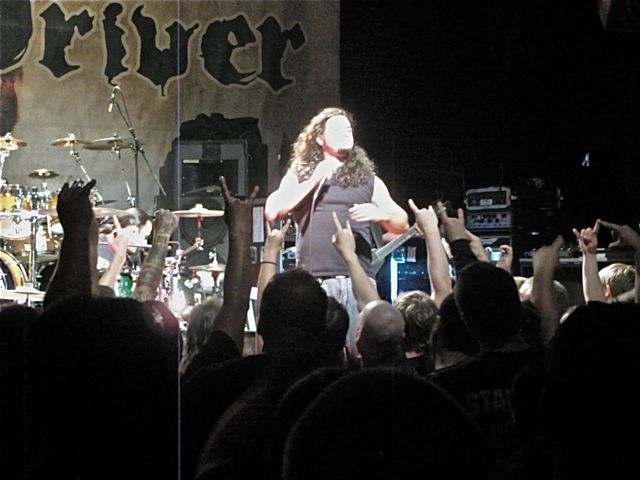 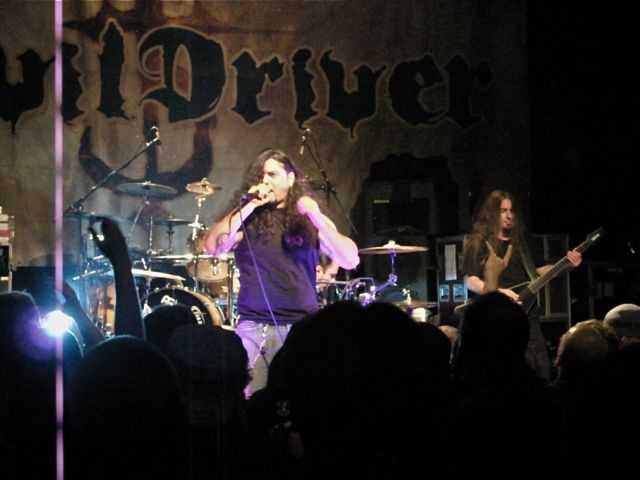 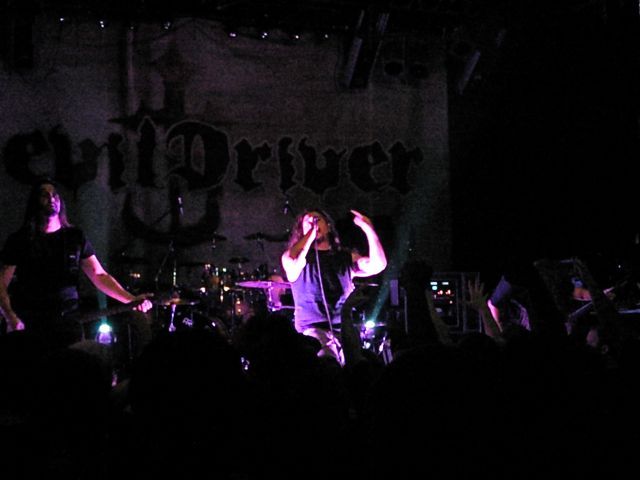 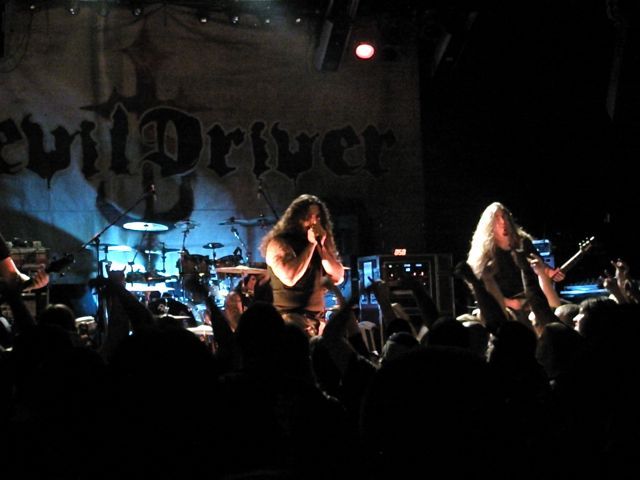 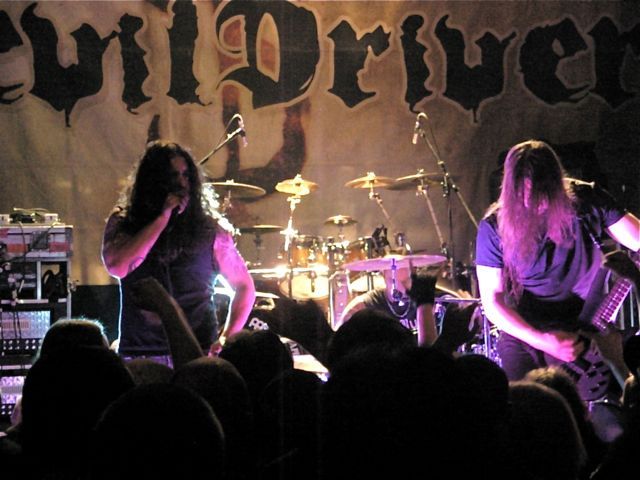 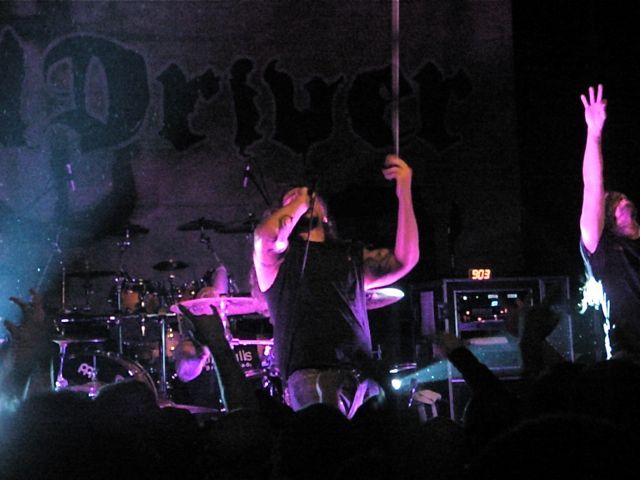 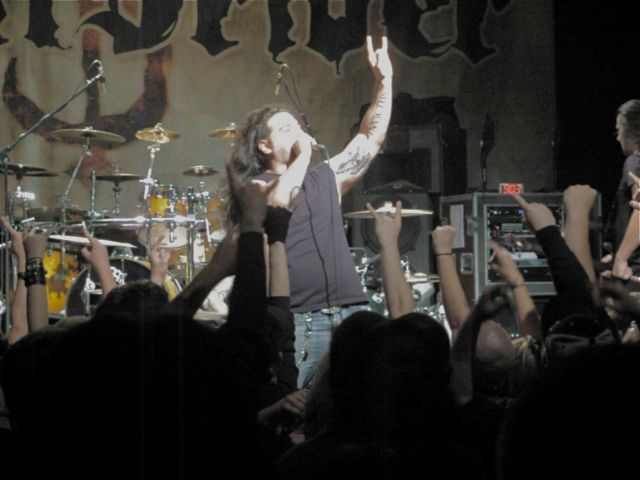 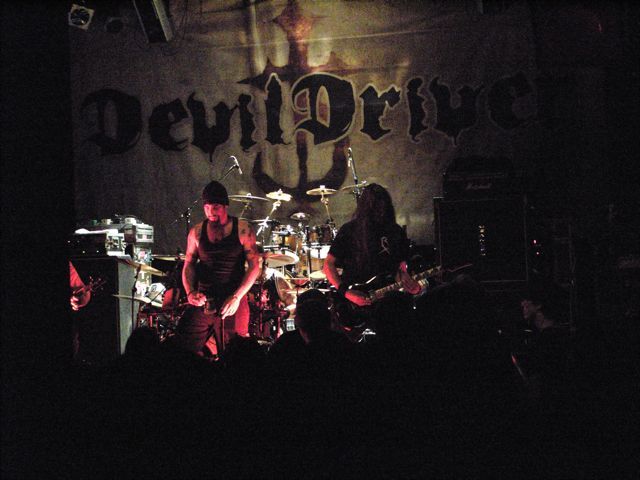 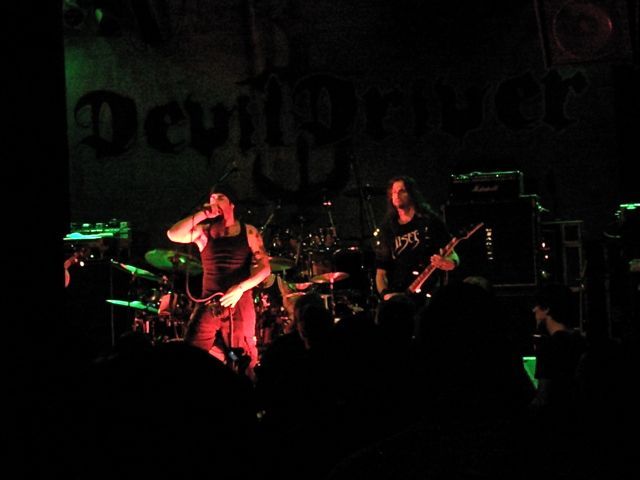 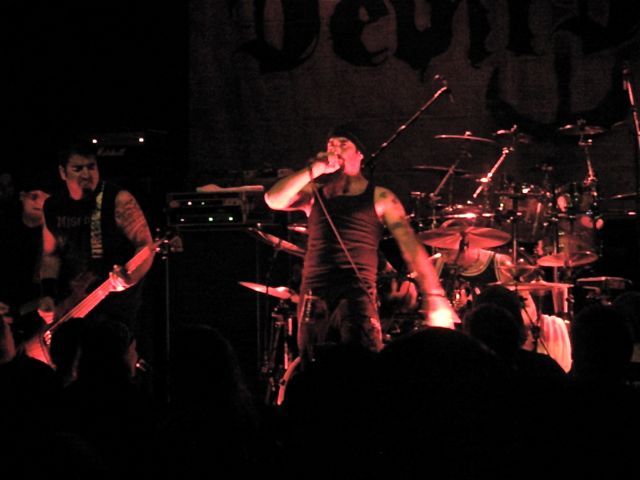 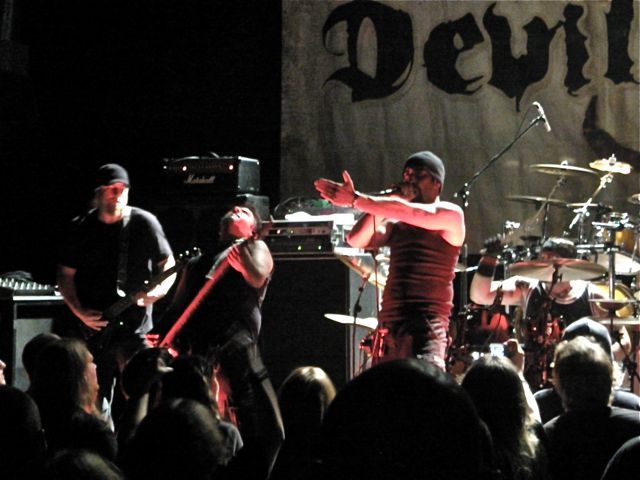 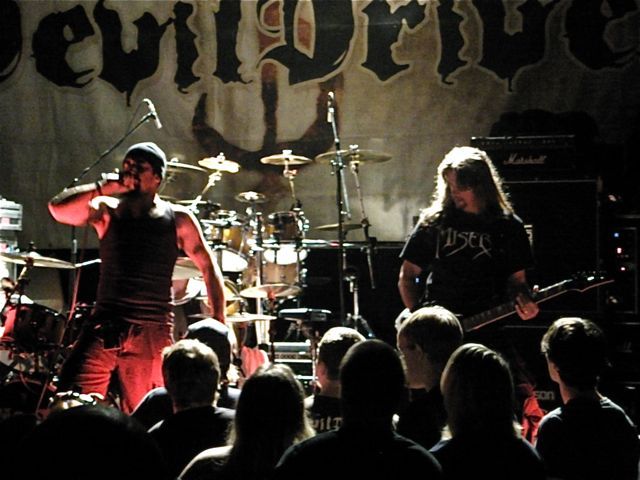 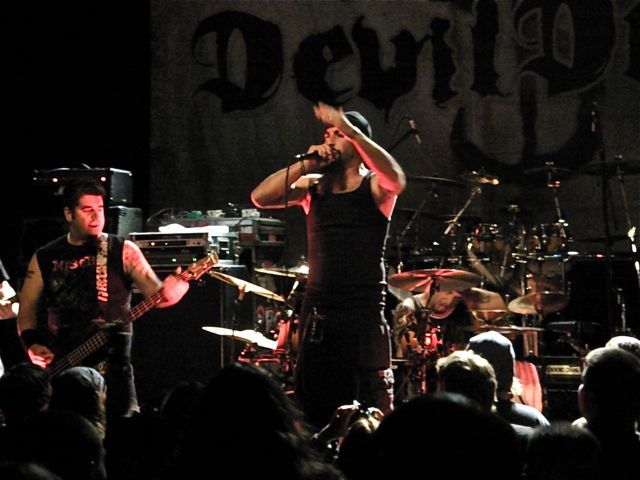 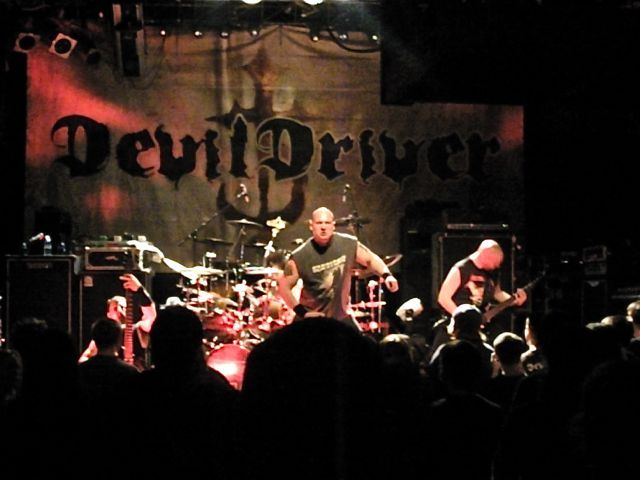 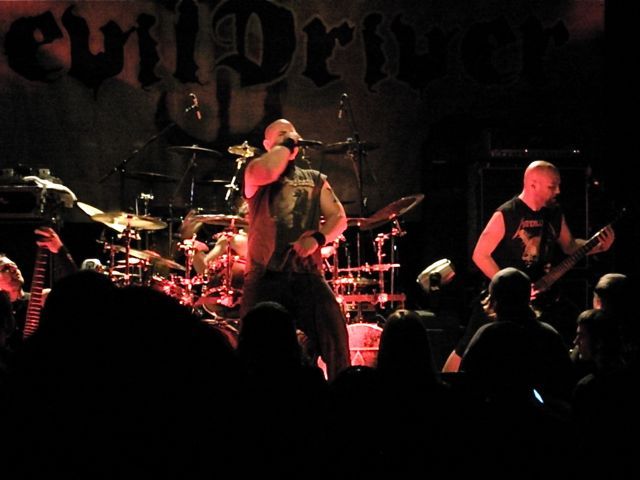 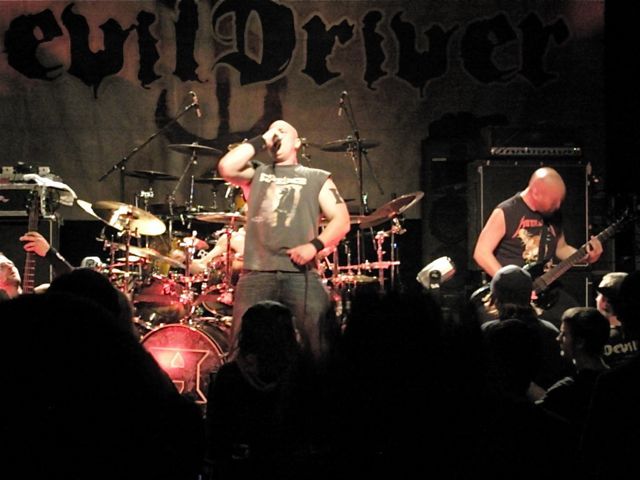 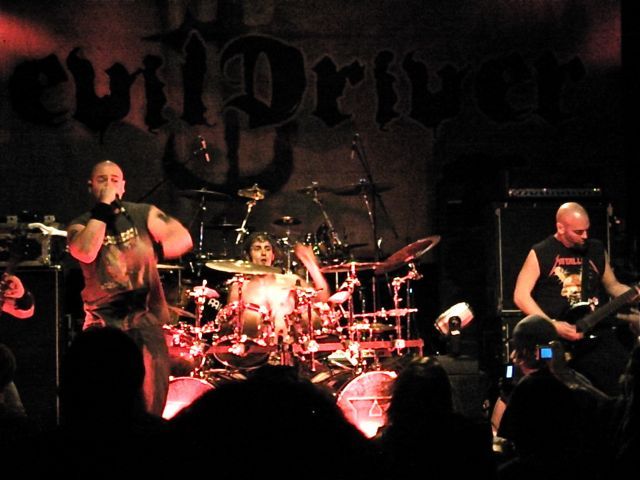 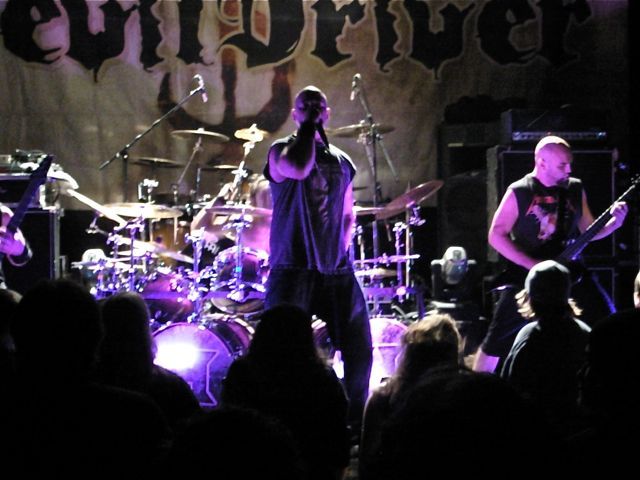 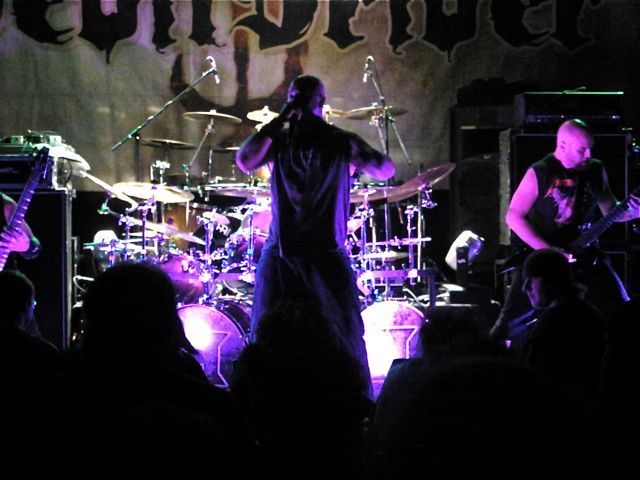 MOST COMICAL MOMENT OF THE NIGHT

The most comical moment of the night, not counting the many times when people half my size tried to run me over on their way into the pit, occurred while I was outside puffing on a cancer stick between sets.

Really geeky young dude, half my age, wanders over, exclaiming in a high-pitched voice how much he wishes he could get into the show. It’s an all-ages night and he looks over 21 anyway, so of course I ask him what the problem is. He says he doesn’t have enough cash and, because he’s from out of town, the club won’t take his credit card.

I assume this is a come-on for a hand-out, but I happen to have an extra ticket, so I just give it to him. He shrieks, “SUHWEEET!” and proceeds to thank me profusely. I smile, thinking he will now go inside. Nope.

He asks me if I ever go out of town to catch metal tours. I say I do, sometimes. He proceeds to excitedly tell me about some tour in Calgary, Canada, in September, featuring bands I’ve never heard of. I tell him I don’t know the bands and don’t think I’ll be making that drive because of my job.

He looks crestfallen and then brightens up, yelling “But I bet you wish you could go!” I tell him, “Of course I do!”, thinking he will now go inside. Nope.

He asks me which band I most want to see tonight. I tell him Kataklysm, and I tell him I actually have to leave right after their set. He says he doesn’t blame me because DevilDriver sucks. Stupidly, I disagree. I tell him I’ve seen DevilDriver before, and they put on a kick-ass live show.

He vehemently exclaims that they suck because they try to copy Strapping Young Lad but aren’t nearly as good. I look confused and tell him I don’t really think DevilDriver sounds anything like SYL. He says, “They’re blatantly copying Strapping Young Lad! Have you seen the way they move their heads on stage? Exactly the same!”

I’m at a rare loss for words. Then they come to me: “Hey, I think I hear the next band tuning up. Gotta go! Enjoy the music!”

Later, I see the young dude inside, banging his head to Kataklysm and throwing the goat. Good for him, I think. Kataklysm clearly move their heads in a different direction from Strapping Young Lad.