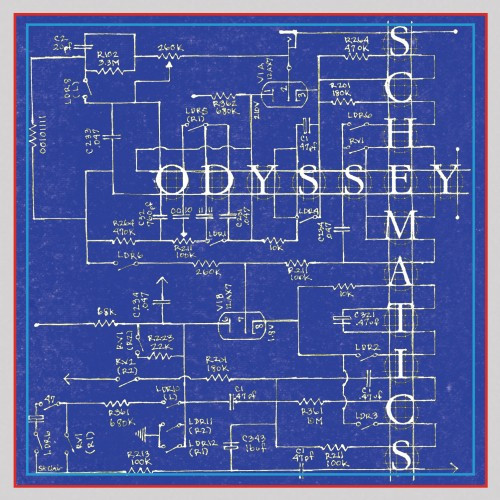 A few years ago my day job took me to Spokane pretty regularly. It’s in far eastern Washington, near the Idaho border. Culturally and politically, it’s a world apart from Seattle. The town itself is not much to look at, but you drive 20 minutes in just about any direction, and you’re surrounded by physical beauty. I also liked every person I met there — every one.

There’s metal in and around Spokane. Every now and then a group of us will make the drive east to catch a tour that inexplicably hits Spokane but bypasses Seattle, and there’s usually a good turnout of headbangers. But for new bands, it’s probably not an ideal place to launch a career. Not that we really know what we’re talking about — it’s just a guess.

So our dog-like ears perked up when we saw a Facebook post from the always-interesting Jesse Zuretti (The Binary Code) recommending that his friends check out a 3-piece Spokane band called Odyssey. Not something we could resist, (a) because of the source of the recommendation, and (b) because of the band’s location.

Odyssey has just released a new 4-song EP called Schematics, which follows on the heels of their September ’09 hour-long debut album, Objects in Space. It’s the EP that we’ve now heard, and it’s very strong. No clean singing on that EP, or any other kind of singing. It’s an instrumental brain scrambler that’s completely engrossing. We’ll try to explain why . . . after the jump. 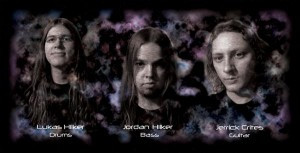 With only four songs to consider, it might not be tedious to write about each one — at least so we hope.

“Schematics” is one hell of an introduction to the band’s music — pulsing, darting guitar leads, and twittering solos that bounce back and forth between the left and right channels, with prominent bass riffing and a bit of a breakdown near the end. The first impression is that these dudes are technically very skilled, and very serious about construction of their songs.

“Fractured Dimensions” turns out to be 11 1/2 minutes long, but it’s a fascinating journey — one that starts with a slow, doomed, methodical introduction and then moves into Meshuggah-esque bass-pounding and flickering guitar rhythms. Plenty of stuttering rhythms and schizoid time signatures follow, and almost halfway through, the pace slows dramatically and a prog-metal meditation begins, which includes a very cool, fluid guitar solo. But the song ramps up again, with nimble bass arpeggios and shimmering guitars. 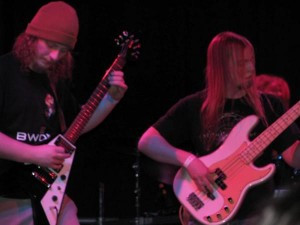 “Requiem” is the shortest track on the EP, with the band’s jazz influences right on the surface. It includes a silky guitar solo laid over an extremely infectious rhythm.

The closer is “Peripheral Aspects” — and this one is heavy, with distorted, down-tuned riffing, rolling drums, and hammering bass. The guitars peal like interdimensional bells and swirl like white water in a Snake River rapids. The song progresses through increasingly hypnotic bursts of beat and song, pulsing and crashing.

For every two-dozen new bands that  string together three chords and jump on the latest bandwagon, whether it be deathcore or something else, maybe you’ll find one that tries seriously to construct intricate music that engages the emotions and the mind at more than a superficial level. And the ratio of bands that can attempt that and pull it off successfully is even smaller. Odyssey is one of those bands.

So, we’re left musing about this question as we finish this post: Just how good do you have to be to play instrumental metal in a town like Spokane and get noticed? Do you have to aspire to the technical chops and songwriting inventiveness of dudes like Tosin Abasi and Navene Koperweis, or Jess Zuretti and Umar Fahim, or Chris Letchford and his comrades in Scale the Summit? Would we even know those names if they had started out in Spokane instead of the larger metroplexes that spawned them? 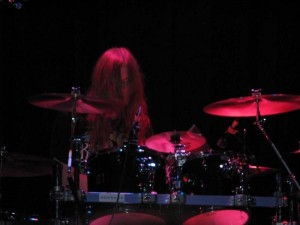 We will find out, as we watch what happens to Lukas and Jordan Hilker and Jerrick Crites — the promising talent in Odyssey.

Here’s a song from Schematics. If you’re feeling a bit bored with your existence at the moment, this shit will wake you the fuck up. If you like it, you can stream all the songs at Odyssey’s Bandcamp page and download the whole EP for $4.  For more info about Odyssey, their MySpace page is here.