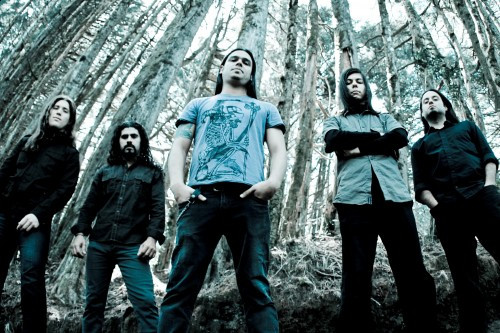 Man, time really flies. It was January 25 when we wrote a post about an unsigned band we had just discovered called Sight of Emptiness — a melodic death metal band from Costa Rica, of all places. There were then three songs from a forthcoming album streaming on the band’s MySpace page, and we liked what we heard. We also found a video of one song and put it up on our site.

Sight of Emptiness has had an eventful eight months since then. That album (the band’s second) is now out — it’s called Absolution of Humanity, and it was mastered by Jens Bogren, who has worked with the likes of Opeth, Soilwork, Bloodbath, Katatonia, Symphony X, and Amon Amarth.

Also, on May 9, Sight of Emptiness opened for Megadeth at Autodromo La Guacima in San Jose, Costa Rica, playing before 15,000 people. That must have been a huge kick in the ass for these guys, though they have previously been hand-picked by Dark Tranquillity and Amon Amarth to open for them in previous Costa Rica performances.

And in June, Sight of Emptiness won an award for “Best Metal Album” at the ACAM Awards in San Jose (ACAM is the Costa Rica equivalent of ASCAP in the U.S.).

And today they’ve released a professionally filmed and edited video of the band performing a song called “Burning Silence” at that Megadeth concert in May. It’s a cool song, the video is fun to watch, and this is a band that deserves some recognition.  The video is after the jump.  Take a look . . .

The songs on Absolution of Humanity can be downloaded at iTunes or at CDBaby (here), and both CDBaby and Amazon are selling the physical CD.  Sight of Emptiness is still looking for a label . . . .