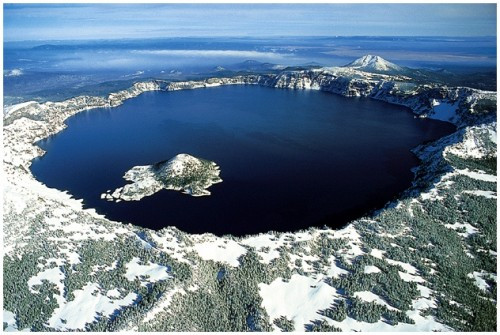 We were so happy that our precious web site survived the Bluehost debacle yesterday with all our data intact that we decided to creep forth from our informational no-fly zone into what some deluded people call the real world and sniff around for news items that would cause us to think, “shit, that’s metal!” We shielded our eyes from the grotesque headlines that continue to dominate the “hard news” and began the search . . .

And in almost no time we hit a trifecta! First, we found two recent items that concern events right here in the Pacific Northwest (which is already becoming depressingly waterlogged with premature seepage from the sky). Second, the stories we found enabled us to continue using alliterative titles for these THAT’S METAL! posts. And third, one of them involves BOTH dogs AND douchebags. Win! Win! Win!

So, here are our two stories for this installment: One involves an intrepid dog that pulled off a truly amazing feat of aerodynamic skill at Crater Lake that enabled him to survive the negligent douchbaggery of his owners. The other involves a self-inflicted acid bath that became the basis for a truly egregious lie. We’re stretching to call this second story “metal”. In fact, upon reflection, it’s really just unadulterated douchebaggery.

As usual, we’re supplementing these stories with our usual, ignorantly juvenile and completely tasteless commentary, plus suitable musical accompaniment.

This story requires a little background information for those who don’t live in the Pacific Northwest: Crater Lake is a remarkable natural formation in Oregon. It’s a body of water that filled up the caldera of a collapsed volcano that was formed about 7,700 years ago. It’s almost 2,000 feet deep (594 meters), making it the second-deepest lake in North America and the ninth deepest in the world, and it’s 5-6 miles (8-10 km) in diameter.  (more detail, possibly more entertaining, after the jump . . .)

The water in Crater Lake is also remarkably pure. The U.S. National Park Service describes Crater Lake as the cleanest large body of water in the world.

Now that you have some background information about the setting, here’s the story, which we combined from two different reports, one from the AP and a follow-up story from Southern Oregon’s Mail Tribune newspaper:

CRATER LAKE NATIONAL PARK, Ore. — A car with a dog inside tumbled 1,100 feet into Oregon’s Crater Lake, but the dog was able to jump from the vehicle with only minor injuries.

Well, that’s a pretty fucking intriguing lead-in, but we’re left with a few questions — like how did the car get to the point where it made that swan dive into the lake and how did the dog get out before it hit bottom? 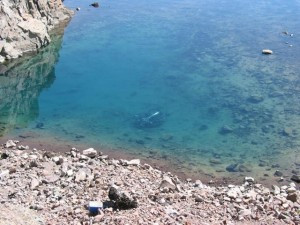 A park news release says a couple from Ashland, Oregon, had stopped Saturday evening at a scenic overlook. But the emergency brake on their 1993 Volkswagen Passat apparently wasn’t set, and the car rolled backward in an arc across the scenic overlook’s parking area for almost 100 feet. It cruised through a narrow opening between the rock wall and a clump of trees and went over the edge of the caldera above the lake.

Okay, that answers the first question. The car went over the edge of a volcanic caldera and began a 1,000-foot fall toward the water with the dog inside because the owners were stoned. Or maybe they were just world-class douchebags. Or maybe both. But how did the dog get out?

Park spokeswoman Marsha McCabe says the dog apparently jumped out the sunroof early in the car’s descent and scrambled up the steep slope to rejoin her owners, whose names were not released. The car broke up as it tumbled, scattering its engine, transmission and other parts.

Well shit, now that’s definitely metal. The dog is inside the car, and although we don’t commune with dogs, we think it’s pretty unlikely the dog knows that the next resting place for the car will be 1.000 feet down — but the dog somehow knows to get the fuck out of Dodge. Most dogs can’t open car doors, but this dog realizes that the sunroof is a way out and goes for it. And somehow the dog does all of this fast enough to exit the vehicle while the drop from the sunroof to the side of the caldera isn’t steep enough to kill it. Amazing. Wonder what happened after the dog jumped out?

It took the dog, an Akita mix named Haley, about 15 minutes to make her way back up the 600-foot slope to her owners. The dog suffered only minor injuries, park officials said. 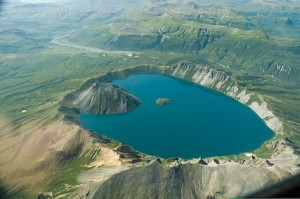 Now that’s fucking metal too! Not only does the dog manage to get out of a car that’s in free-fall from 1,000 feet up, but the first thing it does after hitting the ground is climb 600 feet back up to its owners. Our guess is that if the owners had been in that VW and the dog had left the parking brake off, they’d be a pile of pulverized guts inside their car at the bottom of Crater Lake.

Park officials were trying to figure out how to get the car out of the lake after its plunge on Saturday and recover the scattered pieces from areas of the slope that are near-vertical. The junk must be removed before it’s buried by winter snow. When the snow melts next spring, it could sweep more junk into the lake along with possible contaminants.

The U.S. Park Service will have to change its advertising for Crater Lake. Now they’ll have to say, “Crater Lake! This will be the cleanest large body of water in the world — just as soon as we can airlift a fucking VW Passat out of the water!” But let’s be fair to Haley’s owners. This kind of thing must happen all the time, right? You’re out there admiring the sunset, possibly after altering your consciousness a bit, and next thing you know, your fucking car is 1,000 feet down in the lake and your dog is missing.  Right?

The last mishap of this kind occurred in October of 1922 when a brand new Lincoln belonging to a couple from Klamath Falls rolled over the rim and into the lake near the present day location of the Sinnott Memorial Overlook in Rim Village, park officials said.

Well, thats embarrassing. Eighty-eight years since the last episode of this kind. But not as embarrassing as this. 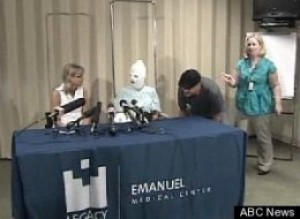 A woman who gained sympathy worldwide after she claimed a random assailant threw acid on her face came forward Thursday with a startling admission: She inflicted the attack on herself. Vancouver, Washington, police chief Clifford Cook said Bethany Storro admitted under police questioning to fabricating a story about the attack, in which she suffered severe burns.

Maybe you didn’t hear about this story when it first broke, but it sure as hell got a lot of publicity up here in our corner of the U.S. As the story first emerged, Ms. Storro claimed that she had been victimized in a random attack by a young black woman. Now we know she just made the whole fucking thing up. Dousing yourself with acid is sort of metal, in a completely bizarro and demented way, but all the rest of this story is just disgustingly deplorable.

Police had been seeking a black woman with a ponytail after Storro described the Aug. 30 attack. She had said the woman asked her, “Hey, pretty girl, want something to drink?” then threw acid in her face.

Storro described her attacker as “pretty,” and said she thinks she had three piercings at the top of an ear. She said the woman was black, wore no makeup, and had black hair pulled back into a ponytail. Storro said the woman who threw the acid was approximately 5-foot-8 with a slight build. She was wearing a green top and khaki shorts, and was described as being between 25 and 35.

Bethany has sure got an eye for detail. Of course, it helps if instead of remembering, you’re just making up the story out of whole cloth. Why would she do something like this? 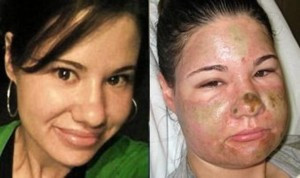 After the incident, Storro made several media appearances, but a planned interview on “The Oprah Winfrey Show” was canceled. She said she had received correspondence from people around the world concerned for her well being. Funds were set up for Storro at Umpquah and Riverview Community banks. Messages to the banks were not immediately returned Thursday.

Vancouver police Commander Marla Schuman said detectives were working on a way to return any money donated to Storro.

Hmmmmm.  Maybe this gives us a clue to Bethany’s motivations. A big splash of attention, no matter how fleeting? Other people’s cash, no matter how much it’s counter-balanced by her very real medical bills? Nope — it still really doesn’t add up. Wonder what will happen next?

Schuman was asked whether Storro will face a charge of filing a false police report, to which she responded: “At this point, yes, that would certainly fit.”

Uh-huh, that would fit.

The sad fact is that lots of people commit self-destructive acts in a tragic cry for attention — and sometimes, maybe most of the time, it’s attention they really needed and never got. What makes this episode different is that Bethany not only drew attention to herself, she also directed unwanted attention to other people — by subjecting the black community in Vancouver and surrounding areas to an intensive police investigation. That’s not metal. That’s just douchebaggery.

On the other hand, for Bethany,  going through the rest of her life with a face like this is probably worse than whatever punishment the law metes out for filing a false police report.

Time for some music to wrap up this post, one song for each story. Enjoy the rest of your day. And put your parking brakes on, won’t you?