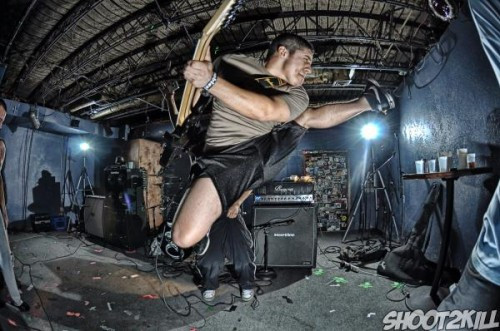 We will name one of ours (just one): Listening to big old fucking bass drops. We’re so happy that we know what to call those things now (one of many things we’ve learned from our readers). Just one simple, triggered note detonating someplace in a metal song like the musical equivalent of a sonic boom.

Any band with the right gear and the right sound sample can reproduce the effect. Its only purpose is to produce a kind of mindless, visceral response. So why do we like bass drops so much? Fuck if we know. Why do we like mashed-up black-eyed peas doused in vinegar? Some things just can’t be explained.

Our latest dose of bass droppage came to us by way of Sergeant D over at MetalSucks. A couple days ago he posted a note about a Chicago band called Demolisher, proclaiming that in his opinion they might just be “the heaviest band on the face of the planet.” Exaggeration is the meat and potatoes of all metal blogs (except ours), so we took this with a heaping of salt, but we still couldn’t resist listening to the Demolisher song that Sergeant D featured in his post. It was called “Decimated”.

There’s no point in debating whether Demolisher is in fact the heaviest band on the face of the planet. It’s enough to say that they’re plenty heavy — and that the “Decimated” song is a very nice fix for bass-drop addiction here on a Friday morning.

(more after the jump, including that song . . . and a vid from Ingested, since we’re now in the right mood, a link for a free music sampler from ARTERY RECORDINGS, and in our latest update, a song from Woe of Tyrants) 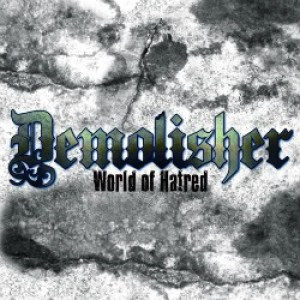 “Decimated” is one non-stop explosion after another. In between the explosions are bursts of hammering by fuzzed-out guitars tuned down to subterranean levels, a few hardcore gang shouts, and some deep, growly expressions of venom. Simple, visceral, physical pleasures.

“Decimated” comes from Demolisher’s 2009 debut release, World of Hatred. We haven’t listened to the rest of the album yet, but we will. Info about how to buy a digital download of the album can be found on Demolisher’s MySpace page.

Now here’s that song from Demolisher. Crank up the volume, enhance your bass response, and check it out:

UPDATE:  Thanks to a comment below, we decided to add a little bonus to this post since Demolisher has gotten us thoroughly in the mood for more simple, visceral, physical music.  How ’bout a little Ingested music?  This song also links up quite nicely with our previous post today and how we felt after our web-hosting meltdown.

ANOTHER UPDATE: Just saw a press release announcing that Artery Recordings has made a 10-song music sampler available for free download at Amazon.com from now through Oct 12. It features music from the first five bands that the label has signed:  Chelsea Grin, Bury Tomorrow, Attila, I Declare War, and A Bullet For Pretty Boy.  Here’s the link to the sampler on Amazon.

YET ANOTHER UPDATE: We may just stop writing new blog posts and continue updating this one for all eternity. Okay, maybe not for all eternity, but maybe as long as we continue to get provocative comments. Andy Synn has provoked us to put up a song from that talented band of Ohioans, Woe of Tyrants.

This is a great song from the band’s most recent album, Threnody. It’s enhanced by not one, not two, but three bass drops. Yes, it would have been awesome without the bass drops, but they make it awesomer.  Awesomer?  Yes, that’s the only word for it.

Woe of Tyrants: Creatures of the Mire