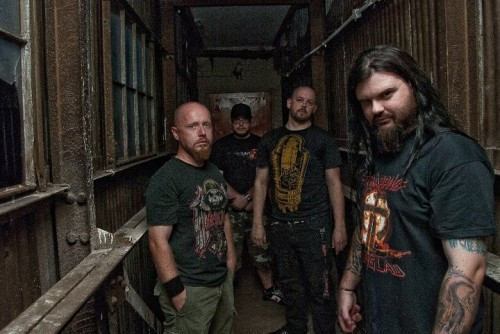 To be fair, we didn’t select it with our enjoyment in mind either. That’s not how this MISCELLANY series works. The way it works is this: I keep a list of new music from bands I’ve not heard before, and then on a given day (yesterday, as it happens), I start checking out their music and/or videos at random, and I include in this blog exactly what I heard and saw, regardless of the outcome.

As regular readers know, we usually have pretty decent luck, because I don’t put anything on the list that doesn’t look interesting for some reason, even though I don’t know what the music is going to sound like. On the other hand, I don’t exclude anything I heard, even if it proved to be disappointingly ghastly.

In this installment of MISCELLANY, I checked out the following bands from the following places:  Drag the Lake (England) (pictured above), Kunvuk (Australia), Winterfylleth (England), and Elvenking (Italy). So, gird your loins, and follow along after the jump . . .

This Anglo-Irish four-piece band is headquartered in the environs of Nottingham, England. When they were a five-piece, they produced a 4-song EP in 2009 called Derailed, which the band has made available for free download at this location.

We haven’t heard that EP yet. What we have heard, and seen, is a brand new video for a new song called “Dead From the Neck Up”, which seems destined for appearance on yet another EP sometime in the future. We were pointed in the direction of this video by one of our readers, and now guest contributor, Andy Synn. It was our first stop on this MISCELLANY tour.

The video is well-done — a cleverly edited performance with graphics of the lyrics emerging here and there. The music is also right in our wheelhouse — hard-hitting death metal with flashy riffing, brutal howling, punchy grooves, and rhythmic diversity. It kicks down the door, throws you around the room, and bolts away before you know quite what’s happened. See for yourself: 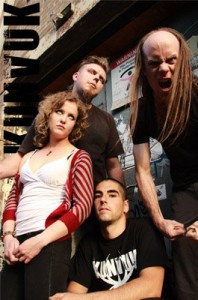 My next stop on this MISCELLANY tour was to check out a band from Sydney, Australia called Kunvuk. I saw a news item about them on Blabbermouth that was intriguing, including the fact that they have a female drummer, so I added them to my list and picked them at random to hear.

Kunvuk is scheduled to release their debut album today. It’s called Immute: Jackals, which seems to be a shortening of the original planned title, Immute: What Follows the Feeding of Jackals. The release will include a second disk consisting of a “reconstructed, re-recorded, remixed and remastered version” of the band’s demo EP, The Gone Mekanik Anticipation Demonstration.

Kunvuk has made the first song from the new album, “Hypochondriac”, available for free download at this location. That’s the song I heard. It’s loaded with heavy, downtuned guitars, jabbing rhythms, machine-gun drumming, a variety of demented vocal styles, schizophrenic time signatures, and a nice, whining guitar solo. This is definitely outside the box, but the screeching vocals make fingernails on a chalkboard sound calming, and I’m still trying to get past them. See what you think: 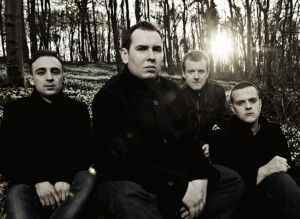 After scratching my head over Kunvuk, I decided to check out a black-metal band from England called Winterfylleth (the name is apparently an old Anglo-Saxon word for what we now know as the month of October). I received a press release announcing the impending discharge of the band’s second album via Candlelight Records called The Mercian Sphere.

According to the press release: “Featuring members of doomsters Atavist, the UK collective churn a vicious yet moody, folk-inspired brand of black metal that harkens back to early days of Enslaved and Ulver. Lyrically, the band delve into tales of England’s archaic history, recounting major events, battles, and even drawing inspiration from certain sites and scenery that grace the countryside of England and have played an integral part in the country’s history.”

The release also reported that Stereogum was streaming a track from the album called “A Valley Thick With Oaks” at this location, so I ventured over there and listened.

Even though the track is more than seven minutes in length, I listened to it three times in a row before forcing myself to move on to something else for this MISCELLANY tour. In other words, I thought it was stunningly hot-shit: dense, melodic, glorious, dark, mythic, powerfully resonant. There’s also a mix of clean-singing with the traditional raspy black-metal vocalizations that works extremely well.

This song made me imagine a vast, deciduous forest in the late autumn, when the blazing colors of the leaves have faded and begun to cascade to the ground, when a crisp chill saturates the air, foretelling that winter is imminent, when massive clouds roll across the sky at speed as a colder front moves in. I’m definitely getting this album.

Here’s that song that Stereogum is streaming, plus the album cover for you to gaze upon as you listen:

Winterfylleth: A Valley Thick With Oaks 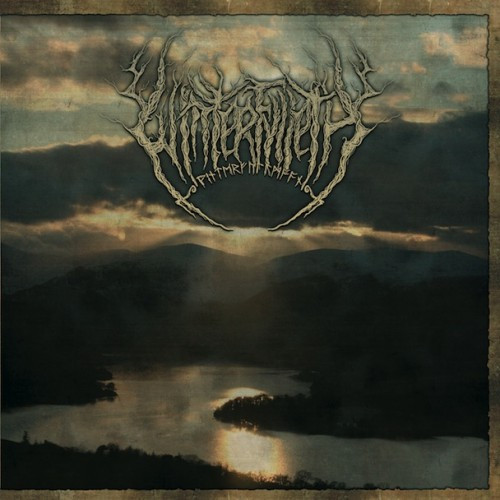 Elvenking is another band I read about on Blabbermouth recently. They’re from Italy and they released a new album in Europe on September 16 via AFM Records called Red Silent Tides. It will be released in North America on November 9. The Blabbermouth blurb included a picture of the album cover artwork by Samuel Araya, who previously worked on Cradle of Filth’s Thornography CD.

I thought the cover art was way cool, so I decided to listen to the music. I told you that my reasons for picking music to hear were impulsive and random. Here’s the cover art I saw: 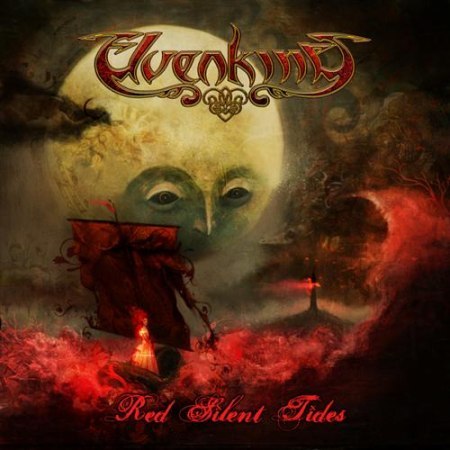 Elvenking have also recently released a new video for a song from the new album called “The Cabal”, and that’s what I watched. I should have known better. The Blabbermouth blurb referred to Elvenking as “folk/power metallers” and included a promo photo that suggests the band members got a bulk discount on eye-liner.

The video is ridiculous. I’m referring mainly (but not exclusively) to the chick in the satiny red evening gown awkwardly trying to dance while perched on a rock, and eventually swirling a red streamer through the air. As for the music, it’s just utterly not my style. I’ll just leave it at that. Maybe some of you will like it.

That’s all we’ve got for MISCELLANY today: A couple of really good finds, one head-scratcher, and one complete fail.

Have a wonderful fucking day.