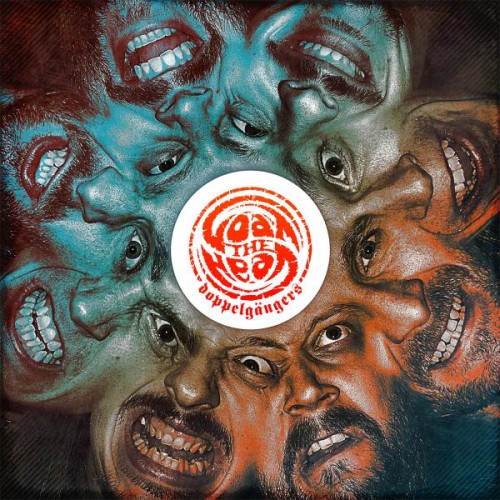 We are so very fucking grateful to Goat the Head. Before we discovered these Norwegian troglodytes in mid-July, we had an aching void in our lives, an unfilled longing for contemporary primal caveman death metal. More than that, we wanted primal caveman death metal played in a contemporary way by cavemen who would be equally comfortable wearing either spacesuits or animal pelts.

And then we found Goat the Head, and it was as if all our feverish prayers had been answered. Suddenly, that void in our lives was filled, and we became complete, at least briefly.

But we owe Goat the Head our gratitude for more than their primal caveman (but contemporary) music. For so many years, we had wondered about the fundamental mysteries of the universe: Where did television come from?  What enabled our primitive ancestors to play the electric guitar?  What causes trailer homes to spontaneously explode?  Goat the Head answered those questions, too.

Thanks to a short but eye-opening documentary film by the band, we now know the answers — and in fact, it turns out that all those questions (and many more) have the same answer: The fucking cube. It all makes so much sense now.

There was only one problem: Back in mid-July, we only had access to two of the songs from a new Goat the Head album (called Doppelgängers) that was then scheduled for release on September 13. It would have to do, but we knew then that only a full album’s worth of material would fully eradicate our painful longing, and hopefully stop our bed-wetting at the same time.

And September 13 came, and as promised, so did Doppelgängers. We have heard it, and it is all we hoped for, and so much more. (our review continues after the jump . . . ) 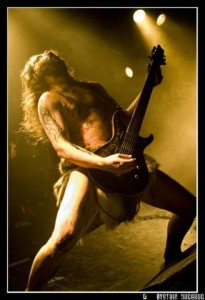 Do you want the kind of adrenaline jolt you can usually get only from having live electrodes shoved up your ass, but without the rectal bleeding? Doppelgängers delivers.

Do you want to have all your nagging anxieties and petty annoyances eradicated with the head-clearing force of a club to the back of your head, but without the usual risk of having your eyeballs ejected from your cranium? Doppelgängers delivers.

Have you been waiting for a death-metal band that would use song titles such as “Neolithic Rocket Science”, “This Tube Is the Gospel”, “Bestial Domestication”, and “The Ubiquitous Cube”? Look no further than Doppelgängers.

Have you ever embarrassed yourself by asking complete strangers in a bar, or on a bus, “Why can’t death metal be clever and fun?”  Well, it can be, and on Doppelgängers it is.

The music on the album is mostly fast and taut, a mix of thrash and death and Lamb of God-style groove. It’s toe-tapping and head-snapping, with big infectious riffs and a sprinkling of screaming, sulphurous guitar solos and tremolo-picked leads. The songs are loaded with barbed hooks that catch in the meaty part of your brain; they pound and shudder and won’t let go. 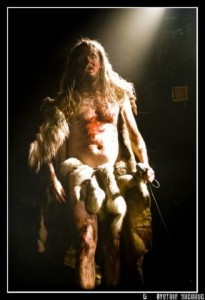 Not all is speed and thrash: “Uncanny Valley Clan” launches with mid-paced, old-school death-metal riffs in a thundering stomp, and “This Tube Is Gospel” features the powerful, soulful voice of Norwegian clean-singer Kirsti Huke, in addition to a rapid spoken-word passage that verges on rap.

But in the main, Doppelgängers delivers propulsion, the kind of metal you need when you wanna get your groove on and bang your fucking head. All the instrumentalists are capable players, and Tue Madsen‘s mixing and mastering has produced a sharp, powerful, contemporary sound.

Per Spjøtvold‘s vocals are an interesting change of pace. They’re deep and guttural, but largely without the jagged, gravelly quality of most death-metal vocals, and from time to time he elevates his range into near-clean-singing territory. The dude has got a good voice that grew on us the more we listened.

And then there are the lyrics, some of which you can hear pretty distinctly in Spjøtvold’s delivery. They’re clever and creative, written with tongue in cheek and an affinity for puns and irony. When they do tackle serious subjects (such as the emptiness of TV-driven consumer culture in “The Tube Is Gospel”), they do so satirically and without heavy-handed bludgeoning. Maybe Goat the Head will do you a favor someday and post all the lyrics on the netz someplace, but for now, you’ve got to get the CD to read them all. 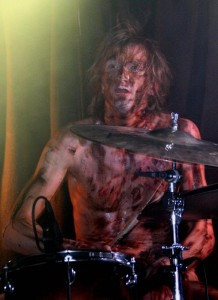 Some people who haven’t heard the music may be tempted to write off Goat the Head as a bunch of goofs who’ve organized themselves around a clever schtick. But that would be their loss, because the cathartic music is quite good – in addition to being an ass-kicking good time.

Here’s an example. We think the lyrics from this song have two meanings — one dealing with the grotesqueries of mass-produced meat and one, perhaps, that uses the controlling of the herd as a metaphor for human society:

Doppelgängers is available in the U.S. as a CD from The Omega Order and as a digital download from Amazon MP3 and iTunes. For those outside the U.S., the CD can also be acquired from Aftermath Music. And the band is still making “This Tube Is Gospel” available for free download at this location. 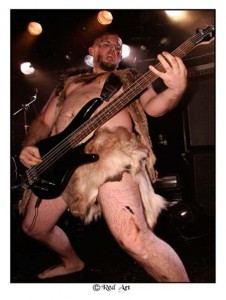 And now, about that carefully researched documentary film, which the band slyly passed off as a teaser for their debut album, Simian Supremacy:

There’s not much music in it — what there is erupts at the end. But it explains so very much. Just wait and see.

We embedded this piece of creative genius in our post about Goat the Head back in July, but we can’t resist featuring it again. It may be our most favorite metal video ever, and if you’ve ever wondered what inspired that phrase “the fucking cube”, which you’ll occasionally see sprinkled in the comments section on this site as an explanation for anything that goes wrong, you’re about to find out.

As the Goats would say, “Please gird brain for explosion!” 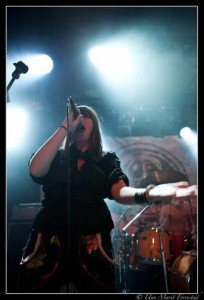 UPDATE: We just got a message from the lovely and talented Kirsti Huke, in response to our July post about the Goats (fortuitous timing). Here’s what she had to say:

You wanted to know how I met the “goats”
I actually had a huge argument with the singer at a party.
One week later, I recorded This Tube is the Gospel with them:-)
I joined them at the release concert they had a couple of weeks ago, What a show!!
…and they are the coolest guys:-)

And finally, we also just can’t resist sharing the following September 20 MySpace blog post from the band, which includes a report about that release party. It’s typically nutty, and in some instances raises more questions than it answers:

Doppelgängers have now been officially available for a week! Reviews have been ticking in and we’re happy to see that most of them land on the 7-8 of 10, with some occasional bad apples here and there for good measure. Distribution is broadening as we speak, both physical and digital. If it’s not in your local store yet, it will hopefully be soon. Either way, you can always order it from Aftermath here. (Our Finnish fans are advised to order from here)

Previous weekend Goat the Head had two release-gigs in support of the new album, and wrapping up how it went is vocalist Per:

With only one proper rehearsal the night before, we’ve come to terms with us being a band living constantly on the edge. A nasty cold had embraced half the band as well, so we were walking on a tightrope over the pit of disaster unto the stage at Blæst in our home town of Trondheim on Friday. We gave it our confident best, and word of mouth seems to have it we delivered the goods! I had obtained some liquid latex from the local sex-shop for my on-stage costume this time. Let me tell you: Never again!

I thought I was relatively short on body hair, but obviously I’m man enough to make the removal of second skin near impossible, and most certainly painful. We had some lovely guests with us in Trondheim as well, Vegard Harkjerr acted as my doppelgänger on the opening song, walking on-stage sporting my nasa suit and monkey mask while singing “Stirring the Enigmatic Appetite”. I joined in halfway through the song, completing the song with Vegard to a confused audience. We finally got the chance to do “This Tube is the Gospel” with Kirsti Huke, who also sings on the song on the album. Pure magic! And really, really fun!

Come Saturday, and we were leaving for Oslo somewhat reduced. Ketil looked like he tried to impersonate the album artwork as his right eye was nice and swollen due to conjunctivitis! The cold had tightened its grip on me, and upped the ante by giving me flaring diarrhoea. Arriving in Oslo, Kenneth learned that he (once again) was the national champion of drum rolls, and had won some heaps of drum gear. Success!

Ten seconds after a ravishing toilet visit at Oslo’s Garage I rushed the stage with the band and quickly found out I couldn’t be too crazy tonight, or it would turn ugly. Or rather, uglier. I’m both really happy and somewhat sorry for not having the ultimate faecal-tinged story for you guys this time, but I can report that the goats played like maniacs and it was a great show after all. We even did a semi-obscure cover of punk-crossover band Broken Bones! 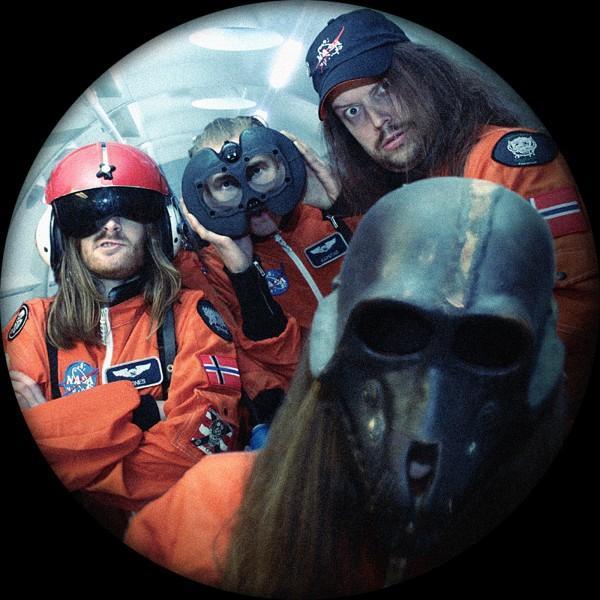 25 Responses to “GOAT THE HEAD: DOPPELGÄNGERS”