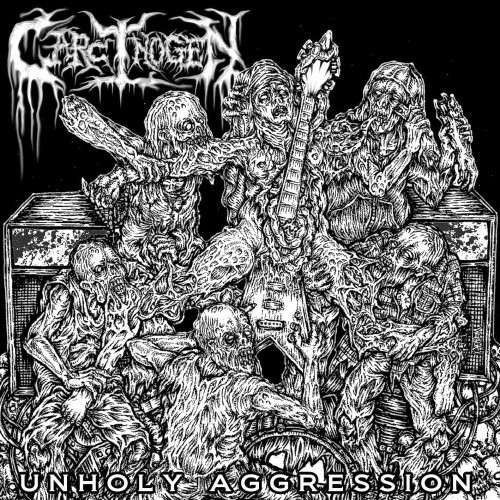 When you mentally strip away all the small and large luxuries of life, you are left with the basic rudiments of existence, the core elements necessary for subsistence — food, water, shelter, and in our case, death metal. Nothing fancy, mind you, just the stripped-down, fuzzed-out, palm-muted, drop-tuned, guttural-voiced, percussive approach of the old school, preferably played at a galloping pace.

Rhythmic dynamics and squalling guitar solos are plus factors. Melody is not required.

Eye-catching album art is also a plus, like that busy piece of black-and-white ghoulishness up above by an Indonesian underground artist who calls herself “Oikwasfuk“, depicting the Virgin Mary being impaled by a flying-v guitar while five zombies eat her alive. You know, fun for the whole family! Bring the kids!

Yes, when the band wrote us, they cleverly used that piece of art to hook our attention, like fish caught in a gill net — that, and the band’s viciously cool one-word name. But that was only the beginning. The art and the name only lured us into the music, which in this case (to persist with our commercial fishery metaphor) works like a processing plant — removing the head, guts, and pin bones and then blast-freezing the carcass.

The band is Carcinogen, the album is a five-song EP called Unholy Aggression, and the very satisfying sound is death/thrash of the old school. (more after the jump . . .) 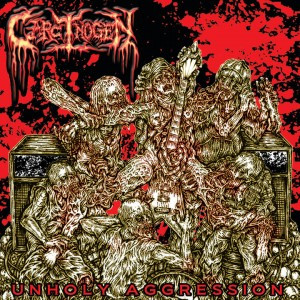 Carcinogen is a band from Long Island, NY, formed in early 2009. Yes, they are young, but they have an old soul. Also, in a short time, they’re beginning to make a name for themselves, sharing the stage with the likes of Cannibal Corpse, Hypocrisy, 1349, Kataklysm, and Skeletonwitch. They’ll be opening for that skull-cleaving Nile/Ex Deo/Psycroptic/Keep of Kalessin/Pathology tour at its Long Island stop in early November.

And they channel the dead and not-so-dead spirits of bands like Possessed, Morbid Angel, Carcass, and the New York Death Metal pantheon — Suffocation, Immolation, and Incantation.

The pacing on Unholy Aggression is that of a revved-up thrash machine, with occasional old-school breakdowns that cause the music to lurch into a lumbering stomp. Down-tuned, atonal guitars rip and grind and chug. Slashing solos erupt with enough heat to flash-fry your brain to a crisp and melt the paint off the walls. Cavernously deep vocals bark and growl mercilessly.

You wouldn’t expect much melody given the kind of musical antecedents that have inspired Carcinogen, and you won’t find much. But there is one long song — the EP’s title track — that includes a slow, melancholy, passage leading to a clear, melodic guitar solo that succeeded in carrying us over the hills and far away — before the song ramped back up to speed with headbanging chugs and blast beats. 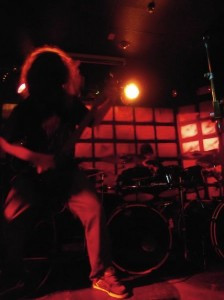 The old school progenitors didn’t bother much with sharp production. Maybe it was beyond their means, or maybe that fused-together, scarred, rusted-out, broken-down quality of the sonic assault was the product of conscious design. Either way, that sonic muddiness has become as central a feature of the music as those dissonant, grinding riffs and subterranean vocals.

Compared to their distant forefathers, Carcinogen have updated the production quality on Unholy Aggression — but not too much. The instrumentation is clear enough, but the band also intentionally didn’t over-produce the EP or do a thorough cleaning-up of small errors. To our ears, for this kind of music, it was a recording/production compromise that works.

For your listening pleasure, here’s an unholy song from Unholy Aggression. Bang yo fuckin’ head:

Carcinogen: Another Page of Hate

Unholy Aggression hasn’t yet been officially released, and we don’t have any info to give you about how the band plans to distribute the music, but when we do, we’ll update this post. More info about Carcinogen can be found on their Facebook page (here) and on MySpace, where one more song from the EP is now streaming.