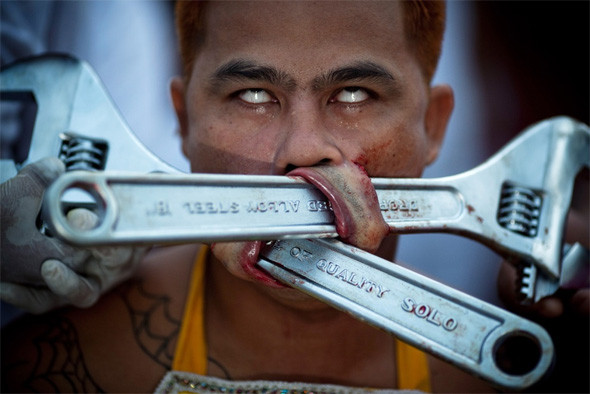 We’ve been running these “THAT’S METAL!” posts since January, and we’re moderately proud of our ability to find attention-grabbing news items and images that make us exclaim “That’s Metal!”, even though it’s not music. But we have been humbled by our brutal brethren at the Netherlands-based metal blog, Death Metal Baboon. In one fell swoop (or, as the Dutch say, in one swell foop), DMB has found something that puts all our previous efforts to shame.

As explained in a recent DMB post, a religious event called The Vegetarian Festival is now in full swing on the island of Phuket in southern Thailand. (We believe that name is pronounced poo-ket, but fuckit, the pronunciation doesn’t really matter for our purposes.) This festival involves some unusual forms of religious observation. As explained in this article on one of the Phuket web sites:

The Phuket Vegetarian Festival and its rituals are thought by many to bring good fortune to religious followers. Phuket residents of Chinese ancestry, called Hokkien Chinese, follow a strict vegan or vegetarian diet for 10 days for the purposes of merit-making and spiritual cleansing. This is accompanied by sacred rituals at Chinese temples and shrines around the island. Stalls of vegan food are set up throughout Phuket City, and even non-vegans will be suitably impressed by the delicious selection.

Perhaps the most visual of these rituals are the displays of extreme body piercings with large objects that can range from knives to umbrellas. Devotees, called ma song, may even partake in walking over hot coals barefoot or climbing up ladders that have rungs made of knife blades. Visitors can see the ma song walking in their trances during long parades through the streets on every day of the festival.

As DMB further explained, festival-goers also set off thousands of fireworks — and apparently stand as close as they can when the explosions go off, apparently because impaling your cheeks with large objects isn’t painful enough and needs to be accompanied by bleeding eardrums and third-degree burns.

What can we say? This is fucking metal — in a completely demented, self-mutilating way.  DMB displayed a large collection of stomach-turning photos from the festival — but there are more, and we have them, because we know you really would like to have your stomach turned, because why else are you still reading this post after seeing the photo at the top?

So, grab yourself a bucket in case you feel the urge to spew a little, and follow along with us after the jump, as we add our own special narrative travelogue to the pics . . .

There is much to see at the Vegetarian Festival, but the streets are so crowded that driving from event to event is an impossibility. That’s why well-prepared ma song bring bicycles with them. Take this gentleman for example. He will be able to travel in style through the crowded streets, just as soon as he remembers how he got the fucking bicycle through his cheek, so he can get it out again. 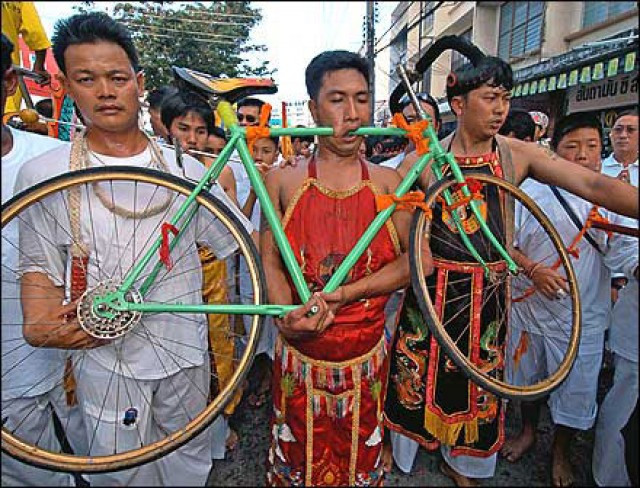 Speaking of being prepared and “merit making”, I wonder if they have Boy Scouts in Phuket. I wonder if they go camp out in the woods and earn merit badges for shit like chopping wood and making your own fire. Because if they do, this dude is ready to go. 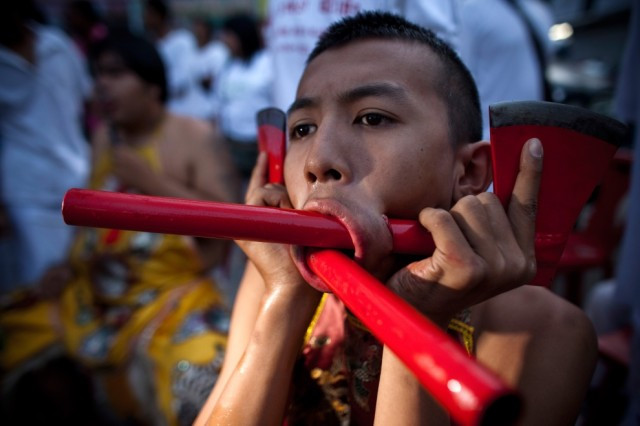 The weather in Phuket can be unpredictable, and when you’re decked out in your finest festival garb, the last thing you want to have happen is get drenched in a sudden cloud-burst. Having a couple of umbrellas handy can save your finery so you can still make that all-important first impression when you meet other festival-goers. 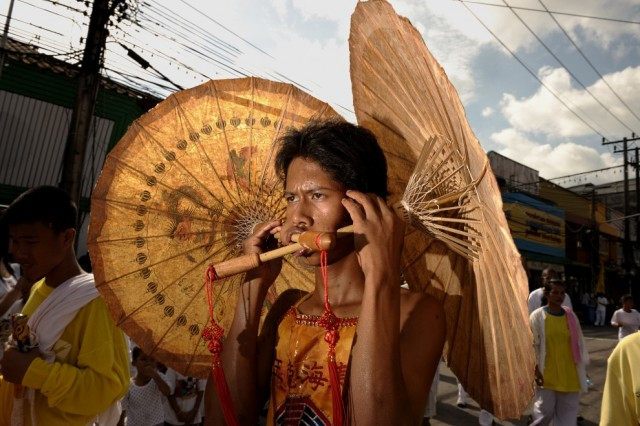 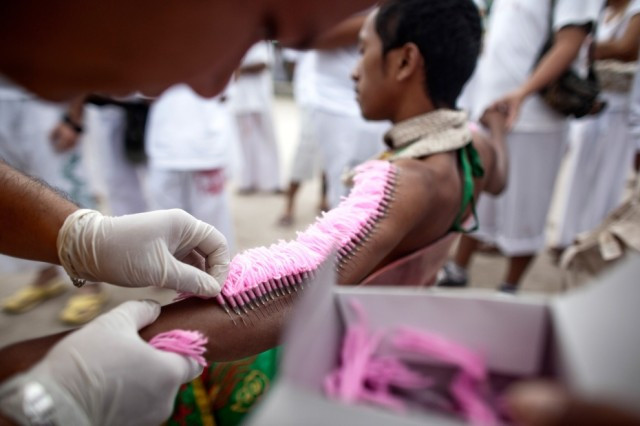 This inspiring event is called the Vegetarian Festival for a reason — it’s all about the food. Stalls of vegan delicacies are set up throughout the city, and your mouth will water at the choices! Watching the parade of other festival-goers with assorted large implements stuck through their cheeks will make you want to dig in to a big platter of vegan delights, so don’t leave your carving knives at home. In fact, bring some for your friends, too! 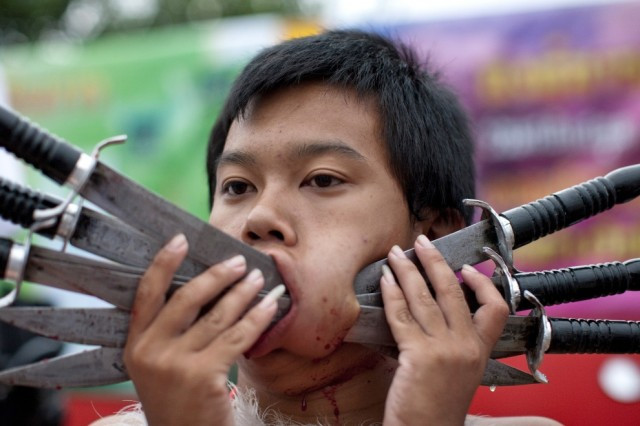 Speaking of mouth watering, you know this young man is imagining just how good some of those vegan delicacies are going to taste. Now, if he could only get the other dude to take that fucking hook out of his mouth. 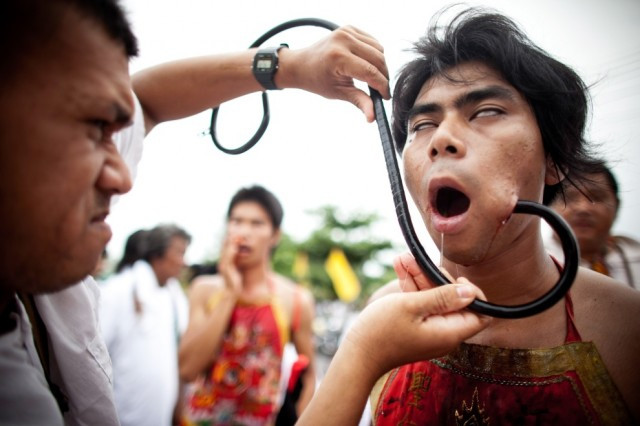 As all the ma song know, the human head and face are ripe with piercing opportunities. So why stop with the cheeks? The tongue is a perfectly good medium for penetration, too. And we’re not talking about some kind of wimpy tongue studs. This dude will settle for nothing less than piercing his tongue with some big, motherfucking spikes. Awesome! 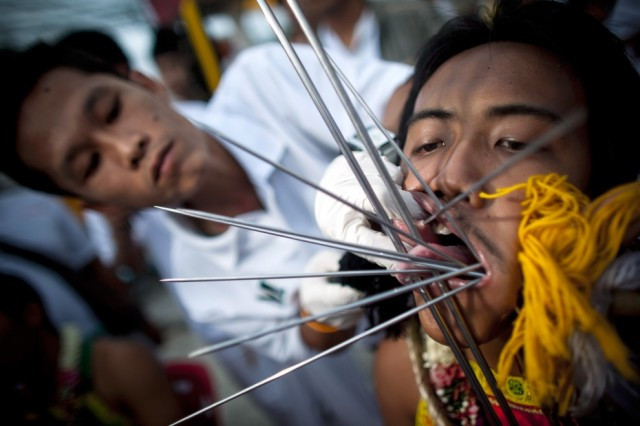 Don’t be misled into thinking that you have to gouge your face with large objects in order to enjoy the Vegetarian Festival in Phuket. You can have just as much fun carrying small gods on a litter and having them go off like land mines right behind your head. Sure, your ears will bleed and you’ll be concussed for a few days, but at least you can drink beer without having it jet through your cheeks like water from a firehose. 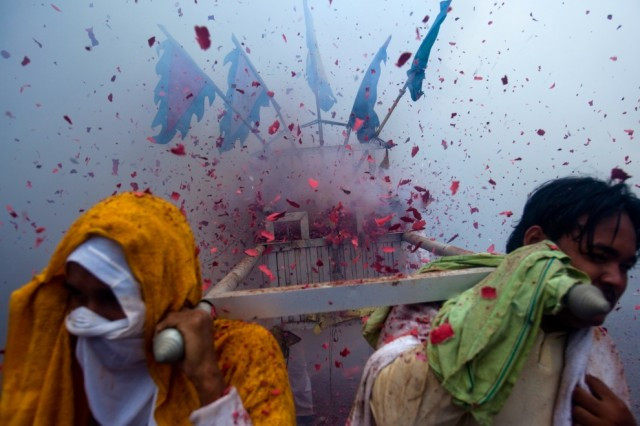 Only a few days are left in this year’s Vegetarian Festival, but as the sun follows the moon, next year will bring another festival, and more opportunities for the ma song and adventurous tourists to fuck themselves up in ways that are limited only by the boundaries of human imagination and the surface area of the human face. We’re looking forward to the day when we can see drumsticks and flying-v guitars inserted through the cheeks and when the procession of the mutilated marches to a song like this, from Spain’s Thirst of Revenge:

Our advice for the rest of your day? Just blow it all up! 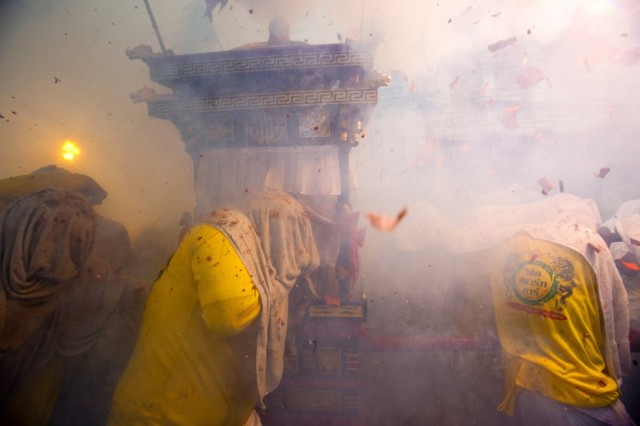