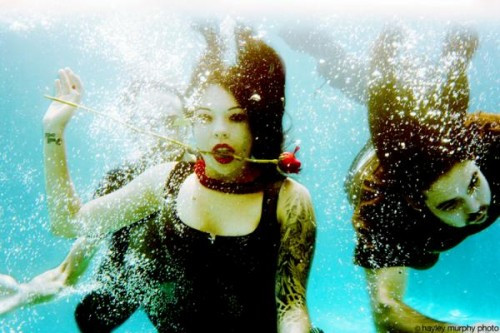 Dreaming Dead is a death metal band from Los Angeles that incorporates a multitude of styles into their music. They also have the distinction, whether they want this kind of attention or not, of being one of those few, good extreme metal bands with a female vocalist (Elizabeth Schall) — who is also an inventively killer guitarist.

We really enjoyed the band’s 2009 debut, Within One, and we’ve been looking forward to the release of their follow-on album, Midnightmares, which it appears the band has recorded as a three-piece, while continuing to hunt for a second guitarist (who Schall wants to be a woman). We haven’t seen any definitive release date, and the band may be holding that up in an effort to find a label who would distribute it.

However, yestrday, Dreaming Dead released an official video for a song called “Overlord” from that forthcoming album. The video itself is fairly no frills — just the band playing in a dark club setting, with lights intermittently revealing the band members as they hammer out the song, and rapid cutting from one shot to the next.

And then there’s the song itself — it’s fucking great: a fascinating piece of modern death metal with driving rhythms, technical musicianship, catchy hooks, and an unexpected instrumental diversion near the end. And Schall is a magnetic presence even on video, with a blend of Nordic rasps and bestial growls to accompany her creative guitar leads.  Check out the video after the jump. We’re pretty sure you’ll like it  . . .

Dreaming Dead is currently on a West Coast tour with Exhausted Prayer. Here’s the schedule: