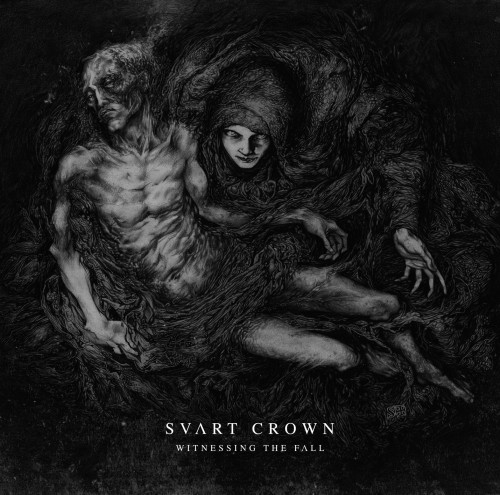 As a matter of genre classification, the album is a mixture of black- and death metal stylings — like a joint venture between Immortal and Immolation — but with black metal as the dominant partner. However, rather than persistently using cascading waves of tremolo picking and fused blast-beats to create cold atmospherics, Svart Crown more often than not rampages like an unpredictable, marauding beast.  (more after the jump, including a song to hear . . .) 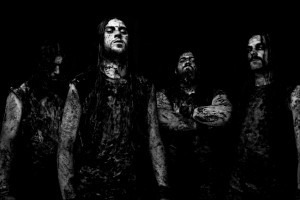 “Where the Light Ends” introduces the album with the gloomy, reverberating toll of drums and feedback-laced bass guitar, and the lead guitar then joins the other instruments, building in intensity and creating a bridge to the first song, “Colosseum”. That song erupts with a serpentine guitar lead and becomes a frenzied, roaring romp, but with frequent changes in tempo and rhythm, accented by Le Bail’s strangled low-end vocals.

“Dogs of Gods” begins with a howl and a blistering combination of percussive force, tremolo-picked shrouds of discordant noise, and a shrieking guitar lead. The darting riffs give way to slower guitar moaning and droning with heavy rumbling on the toms, punctuated by an agonizing guitar solo. The song is layered with multiple guitar tracks and blends boh black-metal and death-metal motifs to generate a mood of ominous power.

Slow, distorted chords begin “Nahash the Temptator” (nahash is apparently the Hebrew word for snakes, or the evil temptor in Eden), but the song then erupts into a fury of rapid riffing and intricate drumming. The guitars jabber and groan and hammer out a repeating riff that’s infectious.

“Here Comes Your Salvation” ramps up the speed factor into the red zone — a maelstrom of buzzing tremolo chords, slithering, clean lead guitar, and pummelng riffage. It’s a hellish, head-exploding attack. The follow-on song, “Into A Demential Sea”, is almost experimental in its combination of raging guitars, complex drumming, and sharp rhythm breaks that cause the song to trudge with death-doom chord progressions. 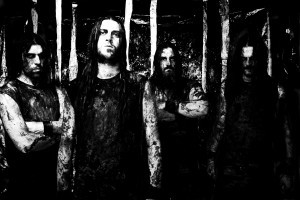 The experimental vibe continues on “An Eternal Descent”. The band establishes what first appears to be a relatively simple riff and then begins to spin out an array of variations on the theme, using a multitude of layered picking styles and ultimately building to an intense, almost chaotic close.

“Strength Higher Than Justice” and “Incestuous Breath” display the band’s versatility, shifting from brutal, modern death-metal riffing with dissonant passages to bestial, black-metal influenced fire and ice. And the album closes with the longest track, “Of Sulphur and Fire”. This is the one song on the album that seems primarily focused on the creation of atmospherics — a slab of doom-influenced morbidity, with heavy hammer-blows and a ghostly repeating riff at the end that signifies the abandonment of hope.

In a nutshell, Witnessing the Fall is a powerful, intricate, dense creation of imaginative, guitar-driven metal that’s well worth your time. Here’s a track to test out on your vulnerable ears. Leave us a comment and let us know what you think: 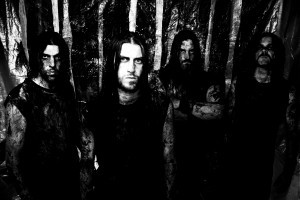 By the way, the album’s striking cover art, featured at the top of this post, is by Stefan Thanneur and represents a dark transformation of Michelangelo’s sculpture of Jesus and Mary, The Pieta.

Svart Crown has been on tour during the last month with Enthroned and Shining, and will be touring parts of Europe in November and December with NCS favorites Melechesh and Noctiferia (plus guests).  For those of you within reach, here’s the schedule:

* MELECHESH with TIAMAT only

Witnessing the Fall can be pre-ordered at the Listenable web shop.  For more information about Svart Crown, visit their MySpace page here and their Facebook page at this location.