Unfortunately, we learned not long after writing that post, via a message from one of the band’s founders, guitarist Jon Butlin, that only he and guitarist Paul Wilkinson still remained from the line-up that recorded Embracing the Deformity. On the other hand, he explained that the jaw-dropping Steve Powell of Anaal Nathrakh fame would be joining the band as its drummer, and that the group intended to finish recording an album of new songs as soon as the line-up could be sorted out. (That post is here.)  (more after the jump . . .) 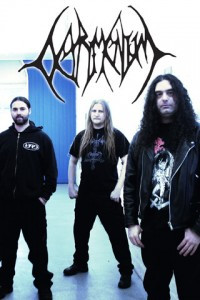 We’ve been waiting, and watching. At last, we saw the news that the band had booked studio time in October. Then, we read the reports from the band about their progress in tracking the new songs. And now, finally, we have the first new song available for streaming from Detrimentum since sometime in 2008. And as it turns out, the recording line-up has remained those three names we mentioned in January — Butlin on guitar and bass; Wilkinson on guitar and vocals, and Powell on drums.

The song is called “The Journeyman’s Lament”, and it’s an unmixed track — but don’t let that deter you.  It sounds damned fine, and the song is a beast of groove-heavy, blackened death metal that includes a haunting melodic breakdown with a beautiful guitar solo and what sounds like a hint of keyboards. The vocals are raw and hungry, the riffing blazes and pounds, and Steve Powell’s drumming is flat-out insane.

Yeah, you can tell we’re excited about this song, and about the promise of an album to come. Check out “The Journeyman’s Lament” below, and visit Detrimentum at their pages on MySpace and Facebook.  [This thing looks like a  embedded player, but seems to function only as a link  to the Detrimentum song-player at MySpace.] 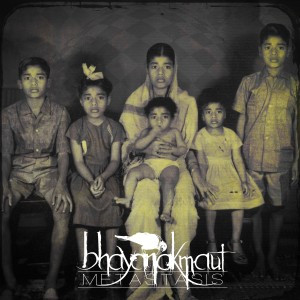 A couple of our Indian readers turned us on to this Mumbai band (whose name means “Terrible Death”) back in April, and on the strength of their self-titled, August 2008 debut, we praised their ability to deliver a thoroughly headbanging musical experience, with infectious, melody-tinged, buzzsaw riffage and a very impressive jackhammer rhythm section.  (Our earlier post is here; and the band have now re-named the debut album Drops From Last Night, based on a fan contest.)

A couple months later, we found out that Bhaynak Maut had made the short list of nominees at the Rolling Stone-India metal awards for Best Metal Band, Best Metal Album, Best Metal Song (“Ungentle”), Best Metal Vocalist (Vinay Venkatest and Sunnieth Revankar), Best Metal Guitarist (Aditya Gopinath and R. Venkatraman) and Best Metal Drummer (Rahul Hariharan).  As we said in our post about those awards, “Not too fucking shabby!”

We’ve been keeping track of these dudes, waiting to see what they’d do next, and now we know. Yesterday, they released an EP called Metastasis or free download, consisting of three new songs: “Chakna for Church”, “Dear <Name>”, and “Confucious”.

Listening to this EP is like being strapped in to Old’Sparky and having the executioner throw the switch on 2000 volts of current. It’s eyebrow-scorching, whiplash-inducing death-grind that sends you careening off the walls like a human pinball.

It’s intense — really intense: Furious, technical riffing augmented by rhythmic body-blows and a duet of hardcore howling and carnivore growling. It will clean your skull down to the gleaming white bone. It’s just fucking riotous, but also massively addicting. Check out the first song on the EP:

If you like that as much as we do, you’ll want to go download the Metastasis EP without delay. You can do that by visiting this location. Did we mention that it’s free? It is, and that makes it a gift, doesn’t it? And what do we say when someone gives us a very nice gift?

We say thank you to our metallic brothers from India for coring out our skulls so effectively, emptying them for all the new wonders tomorrow will bring.

7 Responses to “SKULL-CORING THURSDAY: A BRITISH PHOENIX RISES AGAIN AND TERRIBLE DEATH IS UNLEASHED FROM INDIA”