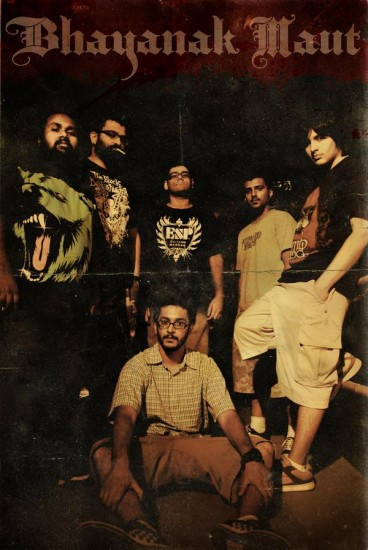 Not so long ago, we never would have known of bands like this or had any realistic chance of hearing their music. But thanks to the miracles of modern technology invented by Al Gore, they’re now just a few clicks away. And that brings us back to Bhayanak Maut.  (stay with us, after the jump . . .) 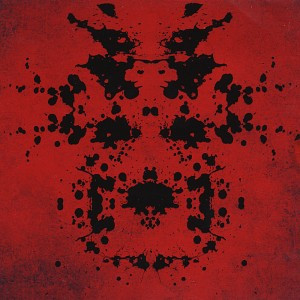 “Bhayanak Maut” seems to mean “Terrible Death” in Hindi. And they do play some fucking mean, groove-oriented death metal. They released a self-titled album last August on a Delhi label called Grey and Saurian, and it appears they released a couple of EP’s before that. It’s the new album we’ve been listening to since yesterday.

The music is fast, the playing is tight, and the songs are well-constructed to deliver a thoroughly headbangable experience. There seem to be two vocalists — Vinay Venkatesh and Sunneith Revankar — and they deliver a rapid-fire blend of death-metal gutturals and shrieks. The two guitarists (Aditya Gopinathan and R.Venkatraman) are quite adept at churning out some infectious buzzsaw riffage, infused with memorable melodic leads that give each song a distinctive edge.

But this music is mainly about rhythm and groove, and the band features a jackhammer rhythm section (Vinit Bharucha on bass and Rahul Hariharan on drums) that propels the whole enterprise forward with compulsive power. It’s a formula designed to make you wanna jump up and start snapping your neck.

Bhayanak Maut aren’t breaking any molds with their music, but man, we’re having some serious fun listening to what they do. Judge for yourself: Here’s a sample song from the new Bhayanak Maut album:

If you like what you hear, more songs are streaming on the band’s MySpace page, and you can buy and download the album here.