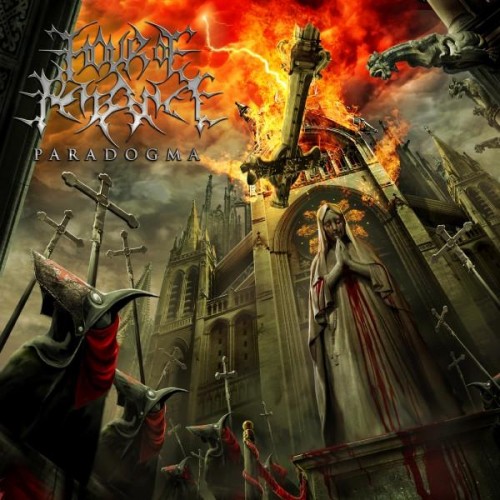 Paradogma swallows you up in a miasma of dark fury that seethes in its intensity, yet infects you with hooks and melodies that will cause the songs to re-play in your head long after the music stops. It’s simply one of the best modern death-metal albums we’ve heard so far this year.  (read on after the jump, and hear a massively infectious track from the album . . .) 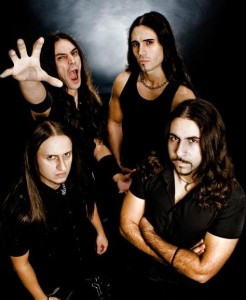 Let’s start by segmenting the band’s assault into its sharp-edged component pieces.

We’re compelled to begin with Mauro Mercurio‘s drumming: It’s jaw-dropping in its speed, power, and variety, and it dominates the sound on this album. In fact, we found ourselves unintentionally focusing on what he was doing to such an extent that at times the rest of the music began to blur around the edges of our consciousness.

The blast beats and double bass are inhumanly fast and brutally propulsive, but equally transfixing are Mercurio’s rapid shifts in both rhythms and the attention he devotes to different drums in his kit. And just for good measure, in case your attention somehow begins to wander over to one of the other instruments, he periodically punctuates the percussive maelstrom with single-note, reverberating slams that sound like bombs going off.

Silvano Leone‘s bass is locked in tightly with Mercurio’s drumming and his playing is nimble and sharp.

On any given song, Giulio Moschini may establish an ominous, distorted melody with his grinding riffs sawing away like industrial blades cracking concrete, but then may break into an even more rhythmic riff that makes your head want to start banging away, and then may bolt into a solo of either furious or hauntingly ethereal quality. His blazing riffs and the way they interact with the rhythm section infuse the songs with memorable grooves

Francesco Paoli‘s vocals are simply awesome — deep, gurgly growls, giving way to hair-raising howls, and frequently matching the speed and intensity of the rhythm section with rapid-fire staccato bursts of words tumbling over each other. 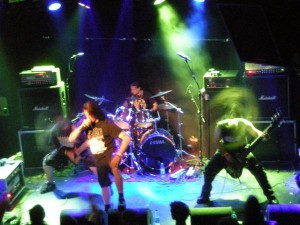 On Paradogma, Hour of Penance have managed to create memorable songs despite maintaining a generally fast and furious technical attack. One song departs dramatically from the generally prevailing tempo. “Spiritual Ravishment” is a self-contained study in contrasts. It launches itself in a pummeling assault on the senses with perhaps the most ravaging combination of drumming and riffing on the album, but then shifts without warning into an extended mid-tempo instrumental, as a synthesizer takes over with a combination of rhythmic throbbing and brooding melody, accompanied only by Mercurio’s solitary pounding.

The final track, “Apotheosis,” also departs from the style of most other songs on the album, and while it’s probably not our favorite (if it were even possible to pick a favorite), it probably is the most infectious. As the volume builds at the start, an almost industrial-style rhythm is established, and then the music shifts down into a slower pace as Paoli begins to shout out angry words. Following a short bridge, Moschini starts hammering out a prolonged, repetitive, massively compulsive riff, Mercurio goes crazy behind the kit, and the sound of bells chime in the background. It leaves you wanting more.

Have a listen to this epic sample from Paradogma, and then go buy the album, because no one song can possibly do it justice.

Hour of Penance: Caged Into Falsehood

6 Responses to “HOUR OF PENANCE: PARADOGMA”