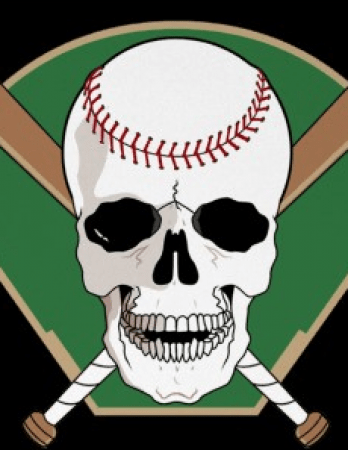 In varying degrees of intensity, your three NCS Co-Authors are all baseball fans. And for baseball fans, today is a magical day, just as it is every year, because today is Opening Day of the Major League Baseball season. (Yeah, we know the fucking Yankees played the fucking Red Sox last night — and they’re welcome to each other — but that didn’t make yesterday “Opening Day”).

The slate of the preceding season is wiped clean, all things are new, and all things are possible. Of course, none of that is really true, but it’s the fate of diehard baseball fans to get their hopes up as Opening Day approaches, even when the rational part of their brains tells them to wise-the-fuck-up.

And so it goes here in Seattle. Our beloved but hapless Mariners had an unexpectedly improved season in 2009, the team was upgraded (at least on paper) in the off-season, and we’re hoping for bigger and better things this year (while trying to ignore the truly sucky offensive showing in spring training).

Off the top of our heads, we don’t know of any extreme metal songs about baseball to commemorate this occasion. Do you? But one association between baseball and metal does come to mind, so we’ll go with that. (see what we mean, after the jump . . .) 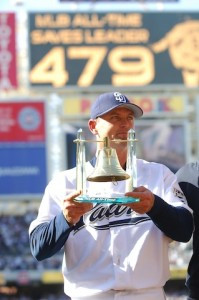 Trevor Hoffman is one of the best closers in baseball history. He is currently the all-time major league leader in saves with 591. He joined the San Diego Padres in 1993, his first season in the majors, and he was the closer on that team for 16 years. He signed with the Milwaukee Brewers for the 2009 season, and despite missing the first month with an injury, he still recorded 37 saves and made the All-Star team for the seventh time.

The dude should probably be in retirement, enjoying his money and his fame, but he’ll be taking the mound again this season, mowing down strikingly athletic kids half his age.

Apart from his awesomeness as a relief pitcher, Trevor Hoffman also pioneered the use of an entrance anthem for baseball closers. Beginning on July 25, 1998, AC/DC’s “Hells Bells” has been played each time Hoffman has entered the field of play at home games. It started in San Diego, and the Brewers are still doing it. The first BONG! sounds when Hoffman steps out of the bullpen onto the warning track, and the song continues until the batter is announced.

Other closers picked up the tradition. L.A.’s Eric Gagne used to come out to Guns ‘N Roses’ “Welcome to the Jungle.” Mariano Rivera (Yankees) and Billy Wagner (Braves) use Metallica’s “Enter Sandman.” The Giants used to play Deep Purple’s “Smoke on the Water” when Robb Nenn made his entrance.

But there’s still something unique about Hoffman and “Hells Bells”. You see and hear it live, as we have, and it makes the hair stand up on the back of your neck. So, we’ll go with that today, in honor of Trevor Hoffman and the ever-so-slight uniting of baseball and metal.