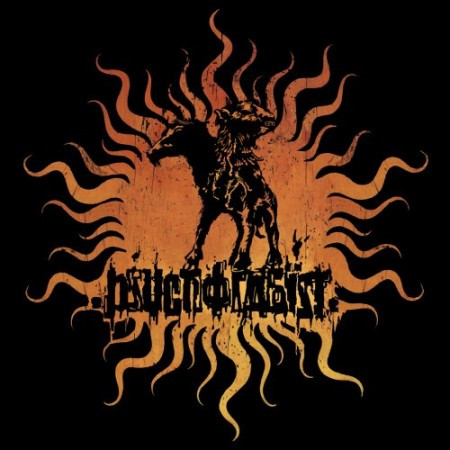 How to describe this? Imagine that extreme metal is a river all its own, with branching tributaries.  The main current is fast and strong, fed with snow melt or heavy rain and rushing with power beneath overhanging trees that shroud it in darkness most of the time. (continue reading after the jump . . .) 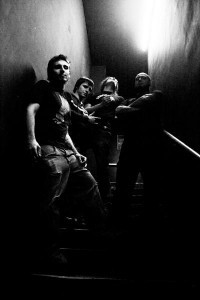 Somewhere, the river breaks from the trees and on a sunny day, the middle of the main current may gleam with brightness while it froths in its turbulence.  That’s where melodic death metal or perhaps metalcore crests along the current.

Somewhere else the river is torn into frenzied rapids by sharply protruding rocks, and somewhere in that chaotic maelstrom you can hear grindcore. Somewhere else a tributary forks through a bed of sulfur, and the bones of animals who tried to cross litter the banks, their limbs eaten away by the acidic waters, and there a cascade of black metal hums through the current.

And then somewhere else, far, far out from the main flow, another tributary crashes in a den of noise down a blackened gorge into a pile of edgy rocks, and from there directly into the shrieking vortex of a whirlpool that sucks all debris down into a liquid blackened pit.  If you could go there, you’d hear Psychofagist.

Lots of people would just call this music noise. But most of my friends and family say all extreme metal is just noise.  This noise howls and shrieks, stops and turns in sharp angles, screams in the piercing wail of a saxophone being tortured within an inch of its life, and then breaks down into a gloomy, meandering trek through a surreal landscape.

The drums and the bass careen unpredictably from wall to wall with power – you feel like ducking lest your head come off. The guitars scream furiously or shudder in desperation or mutter like the muted ravings of the insane. No consistent rhythms here. No headbanging riffage to be found. Just a pummeling but erratic sonic assault that keeps you constantly off-balance.

And then there are those distorted saxophones (baritone and alto), which lend their demented sound to almost every track – a sound that is both organic and otherworldly at the same time. A sound that will make you want to scream, or will transfix your attention like the sound of a rattlesnake in the bush.

Oh, and did I mention the banjo on “Defragmentation Rotunda”? And there’s a flute in the mix somewhere too.

I suppose you could call this is a demented fusion of grind and jazz (avant grind? violent free jazz? psycho-tech-death-jazz-grind?). You could also call it noise. All depends on your taste. But if you’re interested in exploring something that’s way out on the far reaches of the extreme metal watershed, give this a shot.

If you get into it, you’ll want to listen to the music over and again, because you’ll hear something new each time. And in fact, to do this justice, you really need to listen to the whole album straight through, because the songs are clearly constructed to be heard as a collective unit. They differ from each other, sometimes dramatically, and their specific sequential placement on the album seems ingeniously planned.

If you want a second opinion before exposing your eardrums and gray matter to possible injury, you can find a well-written (and laudatory) review of the same album on the Global Domination site here. If you’re already prepared to take the plunge into the whirlpool, have a listen to this cut from II secondo tragico:

P.S. The band has a very funny autobiographical history presented as a psychiatric case study on its website here.  Its MySpace page can be found here.

P.P.S. This is the second band in a week, after Shining, that has a version of King Crimson‘s 1969 prog metal classic, “21st Century Schizoid Man,” in its repertoire (to be found on Psychofagist‘s first, self-titled  full-length from 2004). This freaked-out, grindcore version is even more far-removed from the original than Shining‘s version.  If you want a real Grade A mindfuck, go to our post on Shining and stream the King Crimson and Shining versions of the song and then come back here and listen to this:

P.P.P.S. If you want your own copy of II secondo tragico, and/or Psychofagist‘s first full-length, you can order from Relapse Records, Crucial Blast, or Deep Send Records.