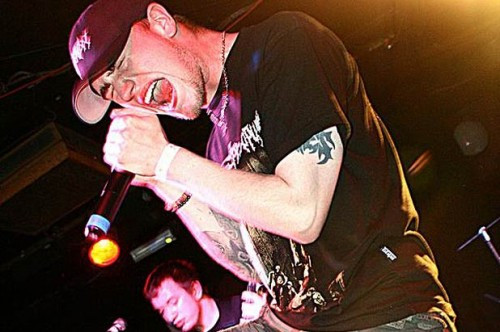 While we wait for 2010 to really get up to fucking speed, we’re still periodically looking back at 2009. A couple weeks ago, we wrote about some UK extreme metal bands that we listened to a lot in the Old Year. But one post doesn’t do justice to the subject. The fact is that the UK death metal scene hasn’t been so bursting with putrescent life in years.

So, we’re going to continue our look back today, dip our toes into the acidic pool of brutal death metal, and express our fond regard for three more UK death-dealers: Ingested, Detrimentum, and Infected Disarray.

In our first feature on “UK Death Metal in Review,” we had to push the “death metal” envelope a little to include some extreme bands that hooked us in 2009. No need to push the envelope today. In fact, you wouldn’t want to touch this nasty envelope — it’s radioactive, with razor-sharp edges and some big fucking spikes. (more after the jump . . .) 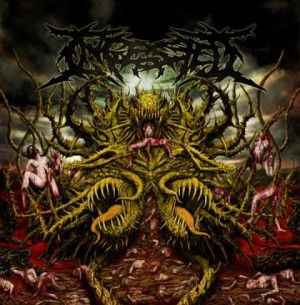 This Manchester band signed with Siege of Amida records in 2008 and discharged their debut album Surpassing the Boundaries of Human Suffering in 2009 — and we just fucking loved it! (Thanks to our NCS Co-Author IntoTheDarkness for turning me onto this band.)

Surpassing the Boundaries is a furiously blistering jolt of adrenaline — ultra-heavy chugging riffs from Sean Hynes and Sam Yates, inhumanly fast blast beats and double-bass, like an AK-47 on full auto, from Lyn Jeffs (ex-Annotations of An Autopsy), basslines like an avalanche of concrete from Brad Fuller, and an awesome combo of vicious subterranean gutterals and higher-pitched howling from Jay Evans.

The production on Surpassing the Boundaries is excellent. The sound is clean, interestingly mixed, and brutally powerful.

To be sure, there’s definitely a “-core” aspect to Ingested’s sound — from some well-placed crushing breakdowns to the riffing style and tempo. But please don’t be misled: this isn’t a generic deathcore band. It’s vicious, well-written, well-produced, distinctively catchy death metal — with a hardcore/slam influence. Here’s a taste from Surpassing the Boundaries:

Latest Ingested news:  the band is currently on tour through Europe with The Black Dahlia Murder, 3 Inches Of Blood, Necrophobic, Obscura, The Faceless, and Carnifex.

This currently unsigned UK band produced its first full-length album in 2008, called Embracing This Deformity, but we didn’t stumble on it until 2009. Actually, stumbled is the wrong word. More like turning the corner into the face of a hurricane.

The music is complex, ultra-fast, technical, brutal death metal that periodically gives way to sweeping black-metal influenced melodic guitar passages and blistering solos (but with no let up on the machine-gun pummeling fury of the blast beats, courtesy of awesomely talented ex-Gorerotted drummer Jon Rushforth). The vocals are for the most part the ultra-deep, gurgled death flavor, with a topping of pig squeals and periodic screaming of the damned in the background.

The overall tone is dark, ominous, and overpoweringly intense. Sit down, grip the arms of your chair tightly, and listen to this sample from Embracing This Deformity:

Latest Detrimentum news: the band has finished guitar tracks on 8 new songs for a second album, but is now looking for a new bassist and vocalist. 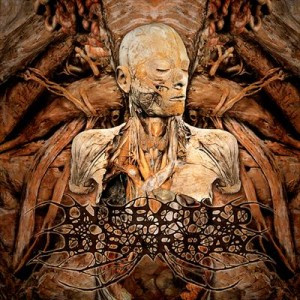 This five-piece group of maniacs started as a side project of members of other UK underground bands (the aforementioned Detrimentum, Gorerotted, and Brainchoke), added new members in 2004, and signed with Unique Leader Records in late 2008. They released their first full-length, Disseminating Obscenity, in 2009.

This album is complex, ultra-brutal death/grind delivered at a screaming pace, like these dudes’ lives depended on it, with only the occasional tempo change via a Suffocation-style breakdown. Trust me — this shit ain’t for the faint of heart.

Compared to the sound of our other two featured bands, Infected Disarray isn’t as heavy on the low end, whether the result of the guitar tuning or the production or both, but the playing is just as technically accomplished. The riffing is wild and constantly shifting, and the drumming is just mind-blowing. And unless I’m just thoroughly confused (entirely possible), the skins work is supplied by the same Jon Rushforth who appears on Detrimentum’s Embracing the Deformity.

I read a descriptive phrase somewhere recently (a novel I think), and it popped into my head as I was listening to Disseminating Obscenity again in preparation for this write-up. So I’ll steal it: this shit is as crazy as a burning duck in a tornado.

Strap in and check out this sample of organized chaos from Disseminating Obscenity:

Latest Infected Disarray news: I couldn’t find any recent news. If any of you readers know about any recent developments, leave a comment.