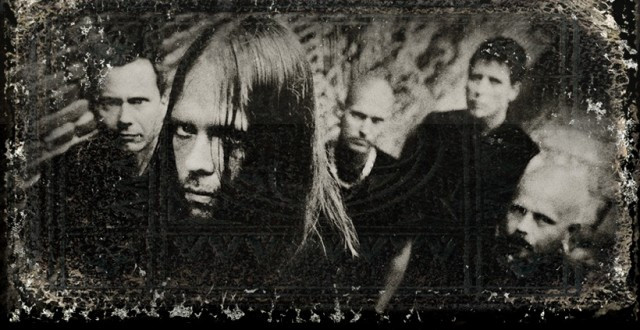 Time again to brachiate out into the arboreal ether of metalness, swinging randomly from limb to limb in search of new music we’ve not heard before, and hoping we don’t face-plant into the edged bark of an ugly tree.

Yes, it’s another edition of MISCELLANY, in which we randomly check out music from bands we’ve not heard before. We go, we listen, we record our thoughts, we lay it out for you as we heard it, regardless of the outcome. It’s a tour into the unknown, a somewhat reckless exploration, swinging from vine to vine, venturing deeper into the metallic jungle, sometimes throwing our feces at unsuspecting ground-dwellers below.

Where was I?  Oh, yeah, MISCELLANY. So, we keep our running list of bands that look interesting, and then we see if the music pans out. Yesterday, I checked out three diverse bands from distant shores: Evocation (Sweden), Amberian Dawn (Finland), and Metal Safari (Japan). And here’s what I found:

We recorded the name of this Gothenburg band (pictured above) on our list based on a Blabbermouth report about the impending release of their third album, Apocalyptic, on Cyclone Empire Records (it will issue in Europe on October 29 and in North America on November 9).

To be brutally honest, we put them on our MISCELLANY list mainly because of the album cover, by an artist named Xaay, who has created covers for Behemoth, Nile, and Vader. If you know those bands, you’ll recognize the style of the art . . . which you can see after the jump. 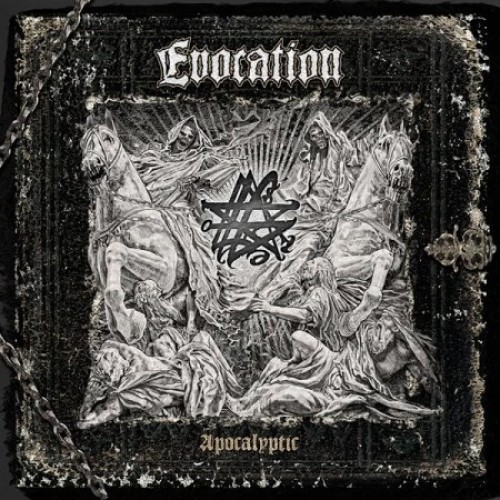 Well, it turns out this band has been around, off and on, for a good long time, but managed to elude our near-sighted vision. Evocation formed in 1991 and recorded two demos the following year, one of them at Sweden’s famed Sunlight Studios. They put themselves on ice in 1993 due to musical differences, but resurfaced in 2004 and released those two demos as a self-titled debut album. Two more albums followed in 2007 (Tales From the Tomb) and 2008 (Dead Calm Chaos).

And now, almost 20 years after the band’s genesis, the third album is about to be born. And so I checked out Evocation’s music first on this MISCELLANY tour. I heard a song called “Sweet Obsession” on Evocation’s MySpace page. It will be included on the new album — and I’ll be damned if it don’t push just about every button I’ve got on my aural pleasure console.

It’s fast, with a vibrating wash of melody-tinged, ass-grinding riffage; scarred, banshee-style vocals; and a flickering, weaving guitar solo that put a big fucking smile on my face. The song immediately triggered the headbang reflex and rattled my skull all the way through to the end. Really awesome shit! Hear what I heard:

More info about Evocation (and more songs to stream) can be found on the band’s MySpace page or their official web site. 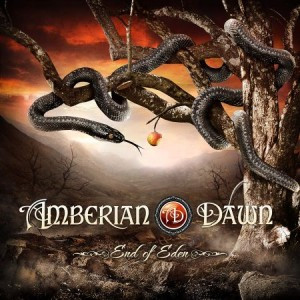 I saw a lengthy Blabbermouth report about this next band, Amberian Dawn, which it described as “Finnish female-fronted symphonic metallers”. The focus of the blurb was two-fold — the band’s October 20 release of its third album, End of Eden, on Spineform Records, and the debut of a video for one of the new songs, called “Arctica”.

Symphonic metal isn’t one of my favorite subgenres, and it’s not the kind of music we usually cover on this site. On the other hand, the band is from Finland, it’s got a female vocalist, and that Blabbermouth piece also reported that as a result of recent line-up changes, Amberian Dawn now includes two members from Norther, a band I like — bassist Jukka Koskinen and drummer Heikki Saari. So, I bit and watched the video after rocking out to Evocation.

This dramatic, keyboard-heavy song is definitely not the kind of music you’re used to hearing, or hearing about, at NCS. It sounds like it could have come from Andrew Lloyd Webber’s Phantom of the Opera, except with headbanging riffs. And, as I discovered, the vocals are entirely clean singing. But there’s no question about it — Heidi Parviainen (a classically trained soprano) has got a stunning, pure, crystal-clear voice, and man can she hit the high notes. The song isn’t going to wean me from the more serrated shit I prefer, but I still liked it.

For more info, the band’s official site is at this location. 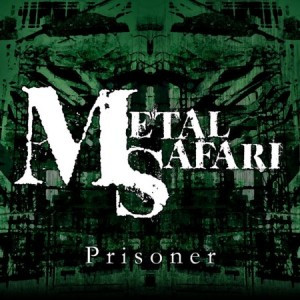 My last random stab on this MISCELLANY tour also made our list based on a Blabbermouth blurb about a video. In this case, the video is for a song called “How To Die” by a Japanese band called Metal Safari. The song appears on their second album, Prisoner, which was released September 22 on Spiritual Beast Records.

I had a fucking blast listening to the song and watching the video! The music is a thrashy piece of infectious metalcore (thankfully, with no clean singing) that includes an extended shred-fest near the end by guitarist Hiro that just blew me away. All these dudes can really play, but it was that long romp of a solo that set this song apart and made me want to go hear the rest of the album.

And then there’s the video itself. It’s a rapid-fire montage of clips from the band playing live shows, touring, goofing off, whizzing (but not throwing feces), and engaging in other forms of general craziness. It’s professionally filmed and edited, and I had as much fun watching it as I did listening to the song. Looks like these dudes know how to put on a high-energy, balls-to-the-wall, live set.

Here’s the completely rocking video of “How To Die”. If this thing don’t make you wanna get drunk and disorderly, I’ll eat my non-existent hat.

That brings me to the end of this MISCELLANY installment. It was a successful adventure. No face-plants into big trees. Better than that — three songs that in very different ways put a big goofy grin on my simian face. Hope you liked this metal as much as I did. Leave a comment and let us know your reactions, and of course, enjoy the rest of your fucking day.

P.S. Whatever else happens today, I will enjoy my fucking day because the fucking Texas Rangers have eliminated the fucking New York Yankees from the ALCS, after never having previously won a playoff series or even a home playoff game.  After 50 years, the Rangers will be in the World Series. Not that I really care about the Rangers, but any team that eliminates the Yankees from the playoffs deserves some horns. Yippee-ki-yay motherfuckers!

UPDATE: Thanks to a comment from “Bob McBobbob” we checked out this video of Evocation playing a driving slice of blackened death metal called “Tomorrow Has No Sunrise” from the Dead Calm Chaos album. Damn, this band is good.