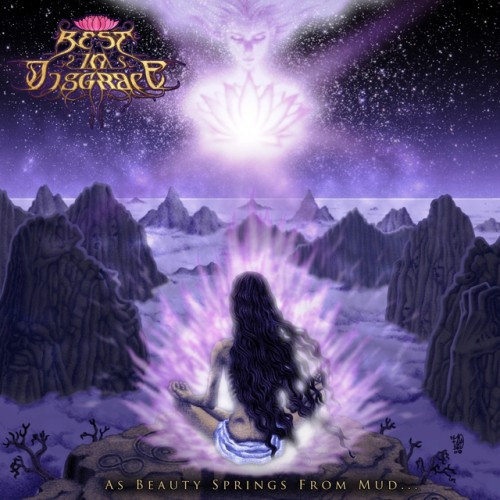 On our metallic NCS island, speed is usually king. The metal we usually prefer is fast and overhwhelming in its power. The closer it comes to producing feelings of delirium and dementia, the better. Catchy rhythms and memorable melodies are nice, too — we find that those elements in a song tend to bring us back for repeat listening. Even in those instances, however, we still prefer that the hooks be embedded in music that zooms along like a machine on a fast track.

But every now and then, though infrequently, the king takes a holiday and turns the island over to slower moving creatures. On those days, we might spend a few somewhat more tranquil hours in the Lorisarium — which unfortunately exists only in our minds, because our duplicitous pen-pals in Nigeria, Ghana, Mali, and Burkina Faso have still not followed through on their promises of wealth so that we might make our Lorisarium dreams a reality.

Off and on over the past couple of weeks, the king has been edged into a forced absence by the music on a debut EP called As Beauty Springs From Mud . . . that we received from by a band called Rest In Disgrace. On first impression, the seven songs on the EP seem simple. The pacing varies, but never arches into the red zone of mayhem. There’s very little blazing fretwork or techie song construction, and the drumming didn’t cause our jaws to drop in amazement at its dexterity.

But the more we’ve listened to this EP, which is built around lyrical themes from Buddhist and Hindu philosophy, the more impressed we’ve become. It combines mid-paced death metal with elements of doom and prog and melodeath, with mood shifts implemented by dreamlike instrumental interludes. It’s not as simple as it seemed at first, and even in its simplest moments, it exerts a primal attraction.

As Beauty Springs From Mud expertly combines the heavy with the sublime, and has won us over despite our usual preference for blazing catharsis. And there’s one song on the EP in particular that has pulled us back again and again like few songs we’ve heard this year.  (more after the jump, including that song . . .) 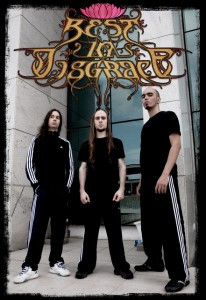 Rest In Disgrace was established in early 2007 in Brazil by bass player Márcio Quirino and guitarist João Pachá after spending a decade playing with other bands. Ultimately, vocalist Rafael Basso joined the band and, along with other musicians, Rest In Disgrace recorded the EP. After the EP was finished, Quirino and Pachá moved to Germany in an effort to find a scene more conducive to the advancement of the band’s career. Since then, they’ve recruited Brazilian vocalist Felipe Dias (ex-member of German band Ancient Existence) and German drummer André Janssen (Fetocide) and are in the process of searching for a second guitarist, while working on a full-length album.

But all that lies in the future. What we have now is that EP, the brain-child of Quirino and Pachá. It’s roughly a half-hour of music, divided into seven songs, but constructed in a way that brings best results by listening to the EP straight through, as a whole integrated composition.

The opening track, “Samsara” is an instrumental piece that begins with slow, simple chords and drumbeats. It ramps up in speed as headbanging chugs and deep-end gravelly growls emerge, and the song finishes with a warm, melodic guitar solo.

“Samsara” moves into “Ascendance”, with more mid-paced chugging riffs and another simple, melodic guitar lead at the outset. Half-way through the song, another melodic lead or solo builds in range and intensity over an underground core of rapidly stabbing rhythm riffs.

“Veil of Maya” follows with an intro of slow, stripped-down, minor-key chords. The rhythm shifts and the pace picks up somewhat and a headbanging melody emerges. A spoken-word passage prefaces a clean melodic solo, and the song’s tempo continues to morph back and forth as the band explores the song’s dominant melodic theme.

What follows is an instrumental track called “Dreaming”. It begins with what sounds to our untrained ears like a monastic chant, and then a harmonic, dual-guitar lead picks up the dour melody of the chant and seamlessly carries it forward, slowly building a dreamlike atmosphere.

“Vanity” brings back the riffage in growing volume and accelerating pace, with pulsating chords and another melodic guitar lead — only to break down into a slow, relentless, doom-metal passage and a bluesy guitar solo.  “The Dying Lotus” then marks a sharp change in musical style. It’s a classically-oriented acoustic guitar instrumental that’s both intellectually engaging and mesmerizing on an emotional level.

And the EP finishes with that song we’ve been drawn back to like metal filings in the presence of a magnet. It’s really two songs joined together, and it’s more than 12 minutes long. Here at NCS, we have big piles of new music we need to hear and limited amounts of time in which to hear it — and yet over the last two or three weeks we’ve listened to this song more than a dozen times. We just can’t resist it.

“Unnamed Feelings – Descension” starts with an infectious mid-paced riff and heavy pounding on the drums. The gravelly death-metal vocals punctuate the pounding and the lead guitar begins to weave new melodic themes through the heavy rhythms, which build in intensity in a barrage of double-kicks. After a reprise of the opening riff and the follow-on melodic themes, the song almost appears to finish around the 7:00 mark, but then segues into a slow, subdued, entrancing instrumental with soft bass arpeggios, dreamlike guitar picking, and an atmospheric keyboard overlay.

That instrumental passage continues with a beautiful, clean guitar lead, and then at the 10-minute mark, the song again almost ends before moving into “Descension” — a piano instrumental with a keyboard-generated cello sound providing the accompaniment (the keyboards were provided by Vanessa Mangionne). Stylistically, It’s almost “new age” music, but it provides a fitting, emotionally affecting close to the work.

As Beauty Springs From Mud is lyrically based on Buddhist and Hindu thought, and the music itself seems to spring from the same well as the lyrics, contrasting the harsh and materialistic sides of life with moments of beauty and peace. As Márcio Quirino explained in an interview, “[Our] perspective can be seen in the lyrics and some sonorities of the band, something like an invitation to experience peace; not a peace that means only the momentary absence of conflict, but the opposite: a peace that stands even in conflict and on the ugly side of life… which would be like resting in disgrace.”

For a debut collection of songs, the EP is solid and unusual, and it certainly makes us very interested in seeing what comes next from Rest In Disgrace. For now, here’s the song that we’ve found irresistable:

We’ve also got a video of a January 2010 studio rehearsal of the song “Ascendance” by the band’s old line-up of Quirino, Pachá, and Basso, plus guests for the live performance:

The band is still exploring ways of distributing their music, but for now, it appears the only way you can get your hands on the EP is by ordering it direct from Rest In Disgrace — and the ordering information, along with more music to stream, is available on their MySpace page.  More background information about Rest In Disgrace and the concepts behind the EP are revealed in this interview.

7 Responses to “REST IN DISGRACE”