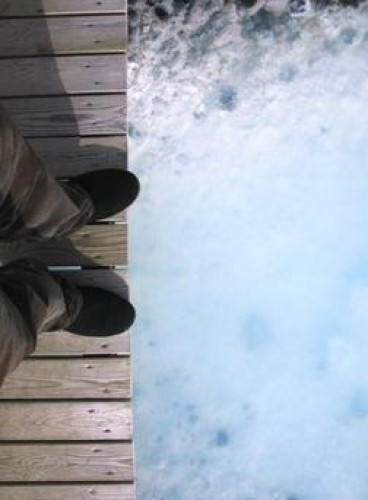 I’m in Austin, Texas this weekend visiting family and friends. 1349 and Triptykon were playing last night at a venue called Emo’s. I was tempted to go, and the group of non-metalheads I was hanging out with even indulged the idea for a while. But then, it got to be 11:00, and then 12:00, and then 1 a.m., and of course by then the idea had perished in a flood of beer and tequila. My friends probably would have run screaming from Emo’s even if I’d managed to herd them over there.

At some point during the night I got a text message from my too-infrequent NCS collaborator IntoTheDarkness raving about a band he had discovered. He doesn’t rave very much, so I decided I’d better check out the music. I was in no condition to do that last night after the flood subsided, and I’m not in much better condition this morning — but I downloaded two albums (legally) of the music ITD recommended, and I’ve been listening to random songs this morning while nursing my titanic hangover.

The weather in Austin has been stunningly good. This morning, the sky is a crystalline, cloudless blue, the air is cool and dry, and there’s an invigorating breeze. It almost makes me feel human. And sitting outside in that environment, gazing at the sky and feeling the breeze, turns out to be an almost perfect setting for this music. (more after the jump . . .)

I don’t have time to write much at the moment, so this post is really just a teaser for more to come tomorrow. And here’s the tease: listen to this song. I’m not going to tell you anything about it or about the band, except this: The song is 8 minutes, 17 seconds long, so it will require more than the average investment of your time for tracks we lay out for you at NCS.

If you’re up for it, listen to this song and leave a comment with your impressions.  I thought it was every bit as good as IntoTheDarkness claimed it would be.  Mysteries will be revealed tomorrow.