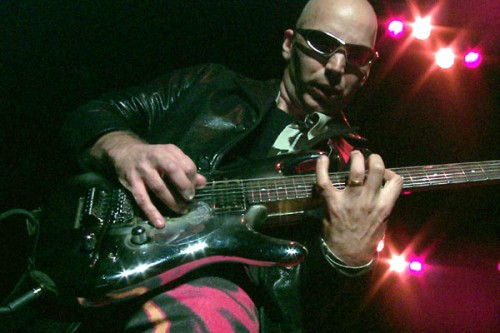 But to clear up any confusion, mellowness is a relative concept, and what we have for you is only relatively mellow — and it does feature the kind of wizardry that Harry Potter only dreams of, in this case, some genuine, no-bullshit, hot-off-the-presses guitar wizardry from Joe Satriani, and something older but very cool from Buckethead.  (after the jump . . .)

I suppose that everyone who’s been a serious fan of metal or rock for more than a handful of years knows who Joe Satriani is. But if you don’t, he’s a guitar god who has taught and influenced several generations of rock and metal guitarists, in addition to being a successful recording artist himself, both with bands and as a solo performer. He’s been nominated for 15 Grammy awards, and he’s currently a member of the super-group Chickenfoot. On October 5, he released his 14th studio album, Black Swans and Wormhole Wizards.

Years have passed since the last time I listened to a Satriani release, mainly because I got so deeply into extreme metal and now rarely venture outside that territory. But now I’m reminded why I used to love his music so fucking much — and the reminder came in the form of an official video, released less than a week ago, for the first single from Black Swans and Wormhole Wizards. The song is called “Light Years Away”. The video was directed and edited by Jon Luini and Arthur Rosato, and shot by Luini, Chris Sentovich, and Boris Karpman.

It’s Satriani and his backing musicians playing the song, with some video effects that work really well. The song is just a gift of awesomeness.

Satriani’s web site is at this location. 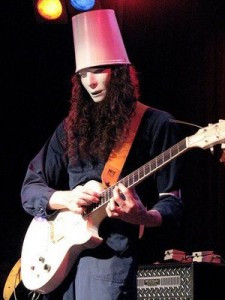 This next item came our way via a recent comment on one of our posts from almost five months ago, courtesy of “Kebabhasse”, one of the contributors to Death Metal Baboon. He provided a link to a song by Buckethead. Here’s how that happened:

In early July we posted a teaser about the then-forthcoming album Too Many Humans by Montreal’s The Last Felony. We had a little exchange about overpopulation in the Comments section after that post (yes, our comments do tend to veer off in interesting directions). Our bro Aaron opined: “Hell, the only reason some people are alive is because it is illegal to kill them . . .” To which I responded, “That’s why we have to listen to music that kills . . .” To which Kebabhasse provided a link to a Buckethead song, also called “Too Many Humans”, and explained: “This isn´t music that kills but rather heals.”

I’d been hearing about Buckethead’s solo releases for years, but never bothered to see what all the fuss was about, because, based on what I’d read, it didn’t sound like my kind of metal (or maybe even metal at all). Yeah, I’ve made that kind of mistake before, e.g., by not listening to the likes of Cloudkicker, Dan Dankmeyer, Tre Watson, or Drewsif Stalin until relatively recently. But Kebabhasse’s comment lured me into listening to that Buckethead song, and wow — another great discovery, and one that demonstrates yet again that I’ve been too close-minded.

For those who are ignorant like me (well, no one else is really that ignorant), Buckethead is the stage name for guitar virtuoso Brian Carroll, who performs with a bucket on his head and a white mask. According to The Font of All Human Knowledge, he has released 29 studio albums, 4 special releases, and an EP, and has performed on over 50 more albums by other artists. He was the guitarist for Guns N’ Roses from 2000 to 2004 and played with the band on the massively delayed Chinese Democracy album.

In his Buckethead persona, he has recorded several albums with keyboardist Travis Dickerson, one of them being a tour-only album called Island of Lost Minds, later re-released in 2004 for wider distribution as Population Override. That’s the album that includes the song to which Kebabhasse pointed us in his post comment.

So, with that too-lengthy preface behind us, here is Buckethead (and Dickerson) performing “Too Many Humans”, from the album Population Override: It’s bluesy, jazzy, ethereal, and about halfway through it begins to ramp up and rock out. An altogether awesome tune. Hope you like it!

15 Responses to “GUITAR WIZARDRY (PROOF THAT WE CAN BE MELLOW, ONCE IN A BLUE MOON)”