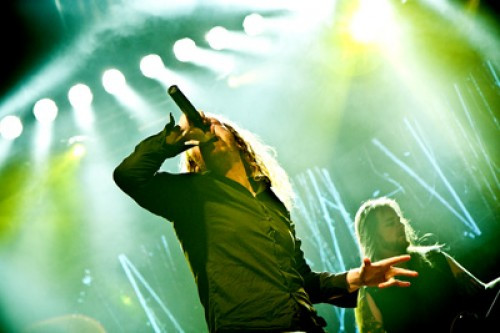 First up was Marionette, a Swedish band of whom I’d heard good things with regard to their brand of modern melo-death, influenced performance-wise by Japanese visual Kei. Unfortunately, they were, and are, routinely terrible. Embodying much of what has gone wrong with the melo-death sound in recent years, the band appeared onstage garbed in black shirts and white ties, each with their own “interesting” hair-style and accompanied by a singer in a pseudo-Japanese mask that lasted all of 30 seconds on his face. They came across as a bad metalcore band using keyboards and “wacky” imagery to appear interesting in a desperate attempt to appeal visually to angsty teens who think that Green Day are punk as fuck and My Chemical Romance have something important to say about the youth of today. (more after the jump . . .) 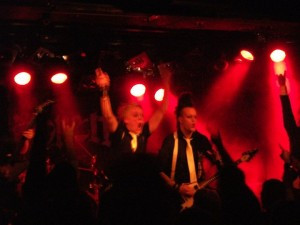 It’s an embarrassment to the over-the-top theatricality of Japanese visual-kei that this band considers dressing like idiots to be of the same sort of style. Yet many bands before have had terrible images that have been as nothing when compared to the high-standard of their music. Marionette are not one of these. With a sound dominated by standard kick-drum patterns and over-bearing keyboards (including a keyboard player who frequently climbed up onto his keyboard stand . . . only to meekly climb back down again when no-one paid any real attention – this happened in almost every song!), a non-existent bass guitar, and a complete lack of anything approaching an interesting or memorable riff, the band epitomised style over substance in a way I have never before been unlucky enough to encounter.

Each song seemed designed less to tell any sort of story or provide any sort of cathartic release, than it did to provide each band member with opportunities to pull clichéd rock poses. Yet in all their time posing and preening, not once did the band really seem to be doing more than just going through the motions – it could have been any crowd, anywhere, and the band still would have raised their guitars and pirouetted at exactly the same points regardless. To top it off, their screamer had an extremely weak voice and poor delivery (granted, one of their guitarists had a powerful screaming AND singing voice, and really deserves to be in a better band) and onstage seemed confused as to whether to camp it up fully, or fall back on clichéd (and unconvincing) horn-throwing and macho metal moves. Tellingly, between songs, with no real back-up for his increasingly contrived stage-moves, their singer was reduced almost entirely to silence with little to no crowd interaction.

Overall, the band put me in mind of nothing more than a bad Still Remains tribute act (I know, remember them?) with a terrible image consultant. Little metal. No class. 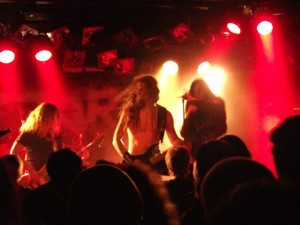 Second support act Avatar were immediately a more interesting prospect – coming across as a strange mix between Judas Priest-esque trad metal, Sentenced-style melancholy, and the upbeat folkery (?) of latter day Amorphis. After a slow start, the band picked up significantly after a few songs, trading guitar leads and bass licks with aplomb, with a singer who (although rooted to the spot by a microphone stand for the majority of the set) gave off at least three times as much energy and stage-presence as all the hyperactive brats who preceded them combined.

Personally, I wasn’t even that big a fan of the band, yet I have to say that both their performance and songs were clearly of a high quality and that they engaged fully with their audience in a compelling manner. Their singer possessed an impressive range, switching from clean croons to death-growls with surprising ease, all topped off with an impressive trad-metal wailing falsetto. Not for everyone’s ears, but well-delivered all the same. More than anything, the band were clearly enjoying every second of their stage time, beaming with massive grins whilst peeling off each note and thrashing through each riff, interacting with the crowd in a compellingly honest manner which spoke volumes of their appreciation for their opportunity and the reception they were given, standing in stark contrast to the stock and unconvincing playing-to-the-crowd epitomised by the previous band. I’d advise people to check Avatar out on their own merits, as there is clearly quality there, even if it won’t be for everyone. 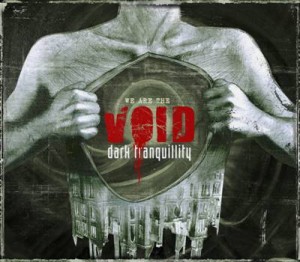 Interestingly, during the set-up for Dark Tranquillity, it seemed to take a surprisingly long time for the stage-crew to set up the band’s back-drop. This, however, would be explained quite quickly – they didn’t have one! Rather, the white sheet behind the band would become the canvass onto which would be projected a series of images and light shows tailored to each individual song! Great idea, extremely well-employed, even in this smaller venue.

Opening with two of the best songs of this year’s We Are The Void album, “At The Point Of Ignition” and “The Fatalist”, in that order, the band stormed the stage, quickly capitalising upon the build-up of excitement and anticipation in the air. Although the guitars were somewhat low in the mix to start with (as they had been all night), by the beginning of the third song, the sublime “Damage Done”, this had been rectified, giving the sound the required crunch needed to display DT in their full glory.

With a focus primarily on the “new” era (post-Damage Done), the set-list still contained a few older gems in amongst the modern classics (“Lost To Apathy”, “Monochromatic Stains”) and new gems (“Iridium” in particular being as strong a song as they have ever penned – although unfortunately no “Archangelsk” this evening”). A particularly pleasant moment came during a rare airing of “The Gallery” when Mikael Stanne stepped aside to allow a projection of Eva-Marie Larsson to appear on the background, singing the lines she delivers on the record. Extremely well thought-out and a nice tip to the older fans.

The band themselves seemed to be in high-spirits, joking among one another both during and between songs (even the usually stoic guitar tandem of Niklas Sundin and Martin Henriksson were both seen to crack a smile or two over the course of the evening), whilst there were little to no complaints about the tightness of their playing and performance. New boy Daniel Antonsson now seems like a fully integrated member of the group, a fact most likely helped by his presence in the writing credits for their new album. Clearly he has been welcomed into the fold with open arms. Anders Jivarp, on drums, put in a far more natural and relaxed performance than I have seen him do in recent years – a fact which I have observed on the new album as well – his playing flowing far more smoothly and naturally these days. 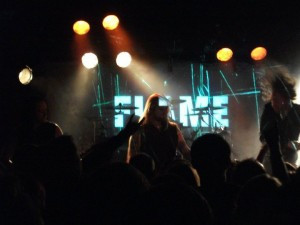 Mikael Stanne was his usual gregarious self, perhaps the most warm and welcoming “death metal” singer in the business, addressing the crowd with a natural ease and disarming charm between songs and growling and crooning each song to perfection; it must be said that the man has a great and sincerely emotional singing voice to off-set his distinctive growls, allowing him and the band to draw upon a wide range of emotional depth.

MVP of the evening however must go to keyboard player Martin Brändström, who demonstrated his key importance to the modern Dark Tranquillity sound, adding depth and texture to each song without ever threatening to overwhelm the other elements of their sound, or reduce the overall “metal” nature of each song. A song like “Iridium” would not be possible without his input, whilst songs like “Damage Done” and “The Wonders At Your Feet” would simply be lesser compositions without the contrasting light and shade offered by his subtle use of electronics and piano.

After a short break following “Punish My Heaven”, the band returned to a series of escalating sirens, diving into “Final Resistance”, complete with lyrical projections (most noticeably a large “ALARM” at the appropriate points) and a complementary light-show. The one negative of the evening came at this point, however, as Mikael Stanne appeared to twist or pull something, or perhaps even succumb to a fit of coughing or some other internal strain, which manifested itself in a weakened and at times off-beat vocal delivery, eventually culminating in him dropping out for the latter half of the song, only to apologise after its conclusion for his error. However, this was only a minor, and totally understandable, point of contention in an otherwise brilliant evening of music.

After dropping back a good few years to bring us “Therein”, the evening ended on a high note, albeit a somewhat predictable one, with a powerful delivery of “Terminus (Where Death Is Most Alive)”. The lights blazed, the band riffed and raged, the crowd roared their approval – all in all, a fitting end to the evening. As an expression of sincere gratitude and admiration, the band took a good long time to thank the crowd and address people directly as the show wound down, allowing their exit music to play out whilst they stood before their faithful following, basking in the reflected good will on display before we were all ushered back out into the crisp and cold Norwegian air.

Support bands notwithstanding, a great night. A great band in fact.

[For more info about these bands, visit them at their MySpace pages: