Thanks again to all the commenters who’ve sent us band suggestions for our ongoing tribute to Finnish metal — and by all means, keep those suggestions coming. We’re still calling this thing a “Tribute Week”, but we’re being really flexible in how we define “week”.

For today’s installment, we decided to focus on relative newcomers. We picked one band off the suggestion list in fairly random fashion — Medicated. And for our lead item, we’re focusing on a band with the attention-grabbing name of Bill Skins Fifth, who contacted us about their first EP in September. We listened to the EP’s opening song back then and got immediately addicted. But we still put the EP aside because of something else we were in the middle of, and our attention wandered, as it often does.

We’ve kept that EP on our list of music to check out more thoroughly, and now maybe it’s just as well we didn’t write about it earlier, because it’s a natural fit in this Tribute Week series.

If you like music that sticks in your brain and rattles the fuck out of it at the same time, we think you’re going to dig both of these outfits. So stay with us after the post to learn more and hear some tracks. 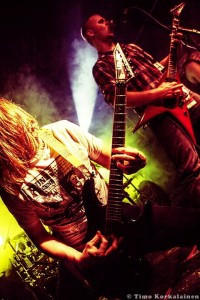 Bill Skins Fifth was formed in Salo, Finland, in 2008 and earlier this year they released their first work, a four-song EP called Act One. The band takes its stand on the bridge between thrash and melodic death metal, though it’s a different bridge than the one occupied by their better-known countrymen who we featured in yesterday’s post (or you could think of it as a different place on the same bridge).

They’re technically capable and they have that special talent that separates bands who have a future from those who don’t: They know how to write songs. To be more precise, they create music that has distinctive melodies and a recognizable structure. They establish themes, they explore variations on those themes, and they return to those introductory themes again.

The guitars are very much in the driver’s seat of this machine, and both Henrik Hömppi and Aamos Ylönen can riff like old pro’s. They generate great tone and riveting rhythms, the solos are well-placed and feel natural, and they create some very nice extended instrumental passages in each song. Hömppi has also got a great, ragged voice, and he complements the melodies without sacrificing that nasty, unclean edge we like so much here at NCS. 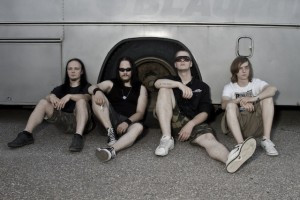 The production on the EP gives the music a garage-band sound. It makes you believe this is what these dudes would actually sound like jamming in a club. Timo Heikkilä‘s drumming is much more in the background than what we hear in a lot of modern metal, but it also sounds very natural — much more a rhythmic complement and underpinning to the guitars than a scene-stealer.

Every one of the four songs on Act One puts a big fucking smile on our faces, but the one we’ve got for you to hear is my favorite. This baby has got so many killer riffs and hooks in it that I lost count — and if you can get the guitar melody in the chorus out of your head after you hear it, I’ll eat one of my Seahawks hats.

Bill Skins Fifth: Among the Departed

To get a legit copy of Act One, e-mail the band directly at bill.skins.fifth@hotmail.com.

Near the beginning of The Silence of the Lambs, when Starling first walks into Crawford’s office, she sees some news clippings and photos on a bulletin board. The headline on the posted copy of The National Inquisitor says “Bill Skins Fifth”. Timo Heikkilä has confirmed our guess that the band took its name from that movie. Timo also tells us that the band is currently preparing and working on new material for a new EP. We’ll be looking for it . . .

We also found this ReverbNation widget that includes one more song from the EP (“The Arrogant One”), plus an older song:

For more info, the band’s official web page is at this location, their Facebook is here, and their MySpace here. 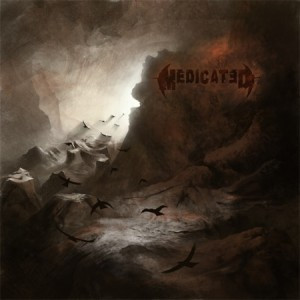 Helsinki’s Medicated is another band on a bridge between thrash and melodic death metal, but it’s not the same one Bill Skins Fifth is on. This band has an even more melodic signature, and vocalist Aleksi Sihvonen includes clean singing along with the throat-grating.

Medicated put out a debut EP in 2008 called Magnum For Amen, and then earlier this year they produced a second one called Ways To Make You Fall. The production on the EP is sharper and cleaner than on the BSF EP, and the songs make you wanna get up and start running into shit. Lots of nail-gunner rhythms, rapidly picked riffs, and core melodies that worm their way into your skull. The last song on the EP (“Faith No More”) also includes an instrumental outro that’s quite beautiful.

Sihvonen’s got a good voice, too. He can hit hard with the harsh vocals and his mid-range clean singing is strong, too. 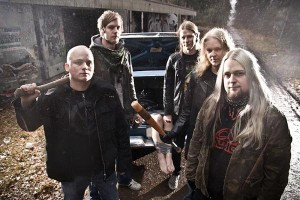 We’ve got to believe these dudes are going places. At least we hope they are. The song we’ve got for you is the EP’s title track. It’s hard-charging, it includes some blowtorch shred, it’s one of the songs that features some clean singing, and it’s as infectious as ebola. Good shit.

Medicated: Ways To Make You Fall

If you like this music as much as we do, you can make it your very own, at no cost, by visiting the band’s web page and downloading all four songs on the EP. They’ve also got a MySpace page and a Facebook page if you want to explore.

(Many thanks to byrd36, one of the contributors at Death Metal Baboon, for suggesting Medicated to us.)