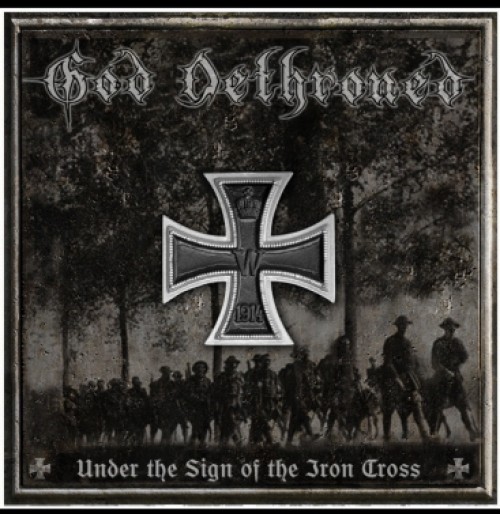 But Passiondale did not exhaust Henri Sattler‘s interest in World War I. He and his bandmates in God Dethroned have now released the second concept album about “The War To End All Wars”. Under the Sign of the Iron Cross (the band’s 9th studio release) is, if anything, even more intense, more emotionally powerful than Passiondale, and it’s simply brilliant — a raw, ravaging assault on the senses that’s also loaded with infectious riffs and dark melodies. If we had the ambition to make our own list of 2010’s best albums, Under the Sign of the Iron Cross would be on it.  (more after the jump, including a track for you to hear . . .) 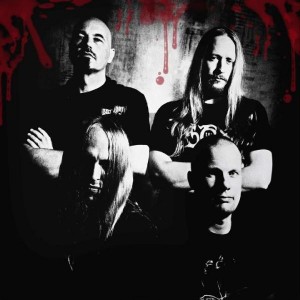 Henri Sattler has explained that he had always wanted God Dethroned to do a concept album, but had never found the right topic. That changed when guitarist Isaac Delahaye joined the band. Delahaye (who has since left the band) lived in Ypres, and on visits to the town, Sattler was drawn to the cemeteries and war memorials. He got interested in the war, visited museums, and started reading. He had found his concept, and that led to Passiondale. Sattler explains that the critical and fan reaction to the album was so positive that he decided to do more with the subject — and there will be yet a third album to complete a World War I trilogy.

For Under the Sign of the Iron Cross, Sattler drew particular inspiration from a first-hand account of trench warfare by a German soldier (Ernst Juenger’s In Stahlgewittern (Storm of Steel)), but also constructed songs around the Battle of Verdun (a 10-month conflict that produced a quarter of a million battlefield deaths), the Schlieffen Plan (Germany’s unsuccessful strategy to end the war quickly on the Western Front before Russia could mobilize to the east), and The Red Baron (Germany’s ace in the world’s first war in which combat took to the skies).

For a metal album, these are some unusually serious, bookish subjects, and suitably, the music is some fucking serious metal, too. Given the horrific nature of the subject matter, Sattler wanted the music to be extreme, and indeed it is — perhaps the most intense, most emotionally powerful, most aggressive metal God Dethroned has ever produced. 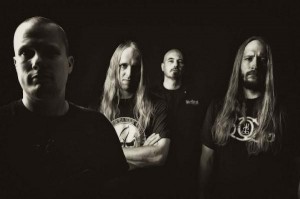 It’s a blackened death-metal soundtrack to a brutal human conflict that decimated an entire generation of men in Europe, and it’s best heard straight through, in a single sitting, because the songs seem organized to produce an effect in combination that’s greater than the sum of the parts. The balanced production on the album (by Joerg Uken and Sattler) also well-suits what Sattler wanted to achieve: The sound is raw and brutally heavy, yet with sufficient clarity that you can hear and admire what’s going on instrumentally.

The album begins with an instrumental (“The Declaration of War”) — a martial drumbeat and swelling guitar chords that announce the start of the assault to follow, and it’s not long in coming. “Storm of Steel” (the song most directly based on Ernst Juenger’s disturbing diary of daily trench warfare) is a sonic explosion — a fast, ripping attack with raw guitar sound that incorporates tremolo phrasings, a real headbanger of a verse riff, an ominous, ringing melody, and a blazing guitar solo by Danny Tunker. Sattler’s mostly intelligible harsh vocals sing of men “In the grip of rage / On the brink of death”, surrounded by destruction, fighting through a hail of bullets and iron splinters.

With hardly a pause, the band launches into “Fire Storm” (also based on Juenger’s diary), with another sonic assault of distorted tremolo chords that grind and boil. The song includes another furious guitar solo (this time from Sattler), and it conjures images of skies on fire and the air filled with the rushing sound of shells and machine-gun fire. 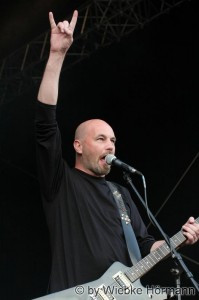 In World War I, far more than in any previous conflict, advances in technology coupled with the settling into trench warfare led to long, brutal artillery battles in which death was inflicted from great distances, as in the battle of Verdun. God Dethroned turns to that aspect of the conflict in “The Killing Is Faceless”. The song begins and ends with a more mid-paced tempo, marked by remorseless guitar grinding. In between those bookends, the blast-beats pummel, the guitars groan and slam with infectious riffage, and Tunker’s guitar leads (or solos) mimic the skin-melting spitfire of flamethrowers washing the trenches in a bath of hellish chaos. Sattler sings about the horrors of “bombardments pulverizing trenches / soldiers ripped to pieces”, and you feel it in the music.

Then comes the title track. It begins with a dual melodic guitar lead, and then Sattler’s growl punches through and the grinding starts. It’s a massively heavy piece of music with yet another infectious verse riff. The melodic introduction is reprised both with a down-tuned tremolo lead and again near the end with a clean guitar lead, and a melancholy keyboard melody. This is the only song on the album to include clean vocals, courtesy of Marco v.d. Velde (The Wounded), and they work well in the context of this song, which expresses both the arrogance behind the Schlieffen Plan and the horrors that would follow its failure. 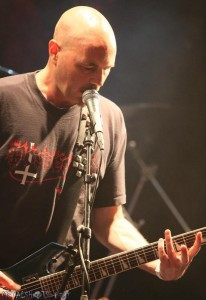 At night along the trenches, relative quiet fell over the war zones, but dawn would bring more artillery, renewed assaults, the explosion of phosphorous shells, the pall of poisonous gas — and that dreaded destruction brought by each new day becomes the focal point of “Chaos Reigns At Dawn”. Musically, this song is more black- than death-metal, a cascade of tremolo-picked fury that’s bleak and dark as indigo. It includes yet another flashy guitar solo, but the dominant image is of unstoppable death rolling mercilessly across a corpse-littered wasteland.

In “Through Byzantine Hemispheres”, the band turns to the conflict on the Eastern Front, where fighting took place in harsh winter conditions and included horrific battles among local militias, episodes of “ethnic cleansing”, and old hatreds unleashed. The music begins with a galloping romp and includes more massive, rhythmic riffing. Consistent with the subject matter, the dark melody has an almost oriental sound.

We’ve referred to guitarist Danny Tunker (Prostitute Disfigurement, Detonation). He replaced Susan Gerl as the band’s permanent lead guitarist before this album was recorded, and he shines on “The Red Baron”. The first segment of the song is fast and furious, bringing to mind images of aerial dogfights, with planes swooping from the clouds spitting bursts of machine-gun fire.

But then the tempo drops and Tunker plays a soulful extended guitar solo, joined at the end in harmony by Sattler. One can imagine a respite in the conflict, the aircraft soaring skyward, the clouds breaking, the sun shining down. But it doesn’t last, and the song’s final segment ramps up again into furious death from above. 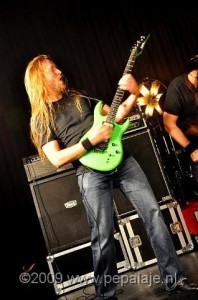 “On Fields of Death and Desolation” closes the album. Thematically, it brings us to the war’s end — with millions dead and vast areas left uninhabitable due to poison gas and four years of shelling and gunfire. The intro to the song is an extended, mid-paced, emotional, guitar-driven instrumental. It gives way to accelerated buzz-saw guitar rhythms and bludgeoning drum fills, and it ends with another extended instrumental melody that mournfully expresses the raping of the earth and the human desolation left in the wake of madness. It’s a fitting close to this powerful album.

We’ve taken your time with explanations about the linkages between the music and the historical subject matter because it’s part of why we think the album is so impressive. Even if you couldn’t understand Sattler’s vocals, even if you knew nothing about the concept of this album, the songs would still be a great example of how extreme metal can incorporate not only massive, vicious body-blows of aggression but also dense, dark melodies.

However, knowing what the songs are about gives them another dimension, because you can hear them as effective musical expressions of a real historical experience — a genuine soundtrack to one of the worst episodes in human history of mindless slaughter and cruelty. Few metal bands tackle objectives that are this ambitious. Fewer still have pulled it off this well. Here’s one of the many impressive tracks from Under the Sign of the Iron Cross. We hope it will whet your appetite for more.

P.S. The references in this post to Sattler’s thinking are drawn from a video interview he gave recently to Austria’s Stormbringer magazine, which can be seen here.

14 Responses to “GOD DETHRONED: UNDER THE SIGN OF THE IRON CROSS”