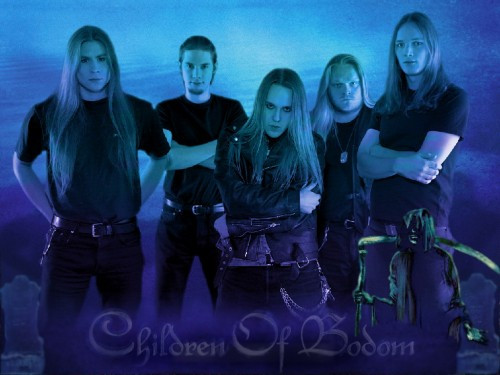 In this ongoing Finland metal tribute, we’ve been trying to focus on bands that are new to us, because we’re selfish like that. But really, how could we run a series on Finnish metal and not talk, at least briefly, about what is arguably the country’s most visible extreme metal export — Children of Bodom?

The three of us who started NCS have been diehard COB fans for many years. Whenever we get wind that they’re coming anywhere near Seattle on tour, we react like Pavlov’s dog at the dinner bell. For us, it’s hard to get enough of that speedy, hooky, identifiably COB brand of thrashy, flashy melodeath or Alexi Laiho’s shredtastic solos, and in just about every way you want, they put on a kickass live show.

These dudes have come a long way from their underground days. They’ve perfected a signature sound — you hear the first few bars of a COB song, and you know it’s them — and it’s a sound that causes shitloads of people all over the world to salivate.

Next year will bring more worldwide salivating, with the scheduled March 8 release of the band’s seventh studio album, Relentless Reckless Forever. The recording is done, and the band has even finished a music video for the first single, “Was It Worth It?”, which was filmed in Pennsylvania (?!?) and will feature two-time X Games gold medalist and two-time Thrasher Magazine “Skater of the Year” Chris Cole as well as pro skaters Jamie Thomas and Tom Asta. So it’s gonna be some kind of skate-thrash party song apparently.

With significant fan popularity and commercial success have come some questions: Has COB become so reliant on that signature sound that they’re starting to become formulaic in their song construction? Is their musical growth slowing? Are they losing that underground edge they used to have? Was 2008’s Blooddrunk album something of a let-down, despite the fact that it was the band’s biggest seller of all time?  (more after the jump . . ., including a bunch of COB music)

Our reluctant answer to all those questions is “yes”. Does that mean we’ve lost our quasi-slavish hunger for their music? Nope — not yet. It does mean that we tend to play the older cuts a lot more than the newer ones. They left such an impression when we first heard them, and the newer songs are starting to sound like paler imitations. We’re keeping our fingers crossed about the 2011 release. What do you think?

To pay homage to COB as part of our Finland Tribute Week, we have some older songs for you. If we were to make a list of the Most Infectious Extreme Metal Songs for the decade to date, this first one would be on it. It’s from the band’s 2005 album, Are You Dead Yet?

Here’s one more from Are You Dead Yet?:

Now let’s jump back in time and check out this song from 2003’s Hate Crew Deathroll:

Now let’s jump even further back in time. This next official video is for a song from COB’s 2000 album, Follow the Reaper:

Tomorrow we’re planning to pick up again with bands recommended to us in the comments on our original invitation for help with this series. For today, let us know what you think of COB — past, present, or future.