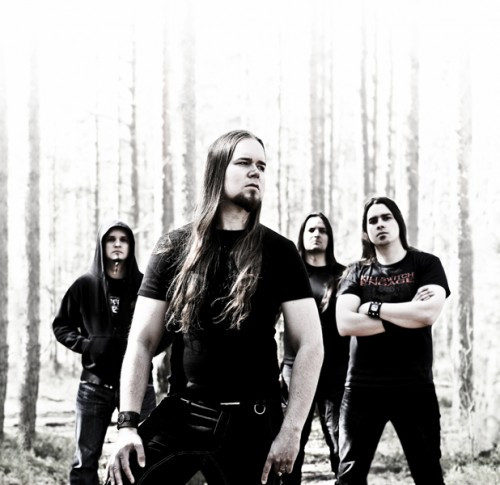 Insomnium, like Children of Bodom, is another one of those bands that just can’t be omitted in a feature on Finnish metal — at least not any feature we’re in charge of writing. They draw together strands of melodic death metal, progressive metal, and doom, and weave them into music that’s heavy, epic, beautiful, and sometimes haunting. When people talk about a distinctively Finnish brand of melodic metal, this band, along with Amorphis, are likely the first two bands they’re thinking of.

Insomnium have given us four studio albums to date, with another one due for release next year — their first after signing in August with Century Media (home of other Finnish ass-kickers like Finntroll and Turisas).

We liked Insomnium’s last album, 2009’s Across the Dark, but our favorite remains Above the Weeping World.  That album was our introduction to Insomnium, and it’s still the Insomnium music we go back to, over and again. It’s weighted more heavily on the melodeath side of the scales than Across the Dark, with more un-clean singing, and that may explain our personal preference for it.

After the jump, we’ve got  Insomnium music and videos for your entertainment — including a special single that the band released in September, featuring guest vocals by Dark Tranquillity‘s Mikael Stanne.

First up, we’ve got the band’s music video for our favorite track from Above the Weeping World. Goddamn, this is an awesome song.

We may not be quite as high on Across the Dark as we are on Above the Weeping World, but we’re still pretty high. On Across the Dark, that is. Here’s Insomnium’s video for a kick-ass track from that album. Pure unadulterated awesomeness. And as band-performance videos go (i.e., videos that only feature the band playing the song), this is one of our all-time favorites.

So, we mentioned that Insomnium single with Mikael Stanne’s guest vocals that Century Media released to promote a Dark Tranquillity-Insomnium European tour in September/October. It’s called “Weather the Storm”, and Century Media made it available for free download if you shared a link on your Facebook page or Twitter. Don’t know if that download is still available, but the web page is still up and running (here).

The song is fucking great.

And to wrap this up, we found the following video of Insomnium performing “Weather the Storm” live at Biebob in Vosselaar (Belgium) on September 29, 2010.  The quality of the video is pretty decent.  The song is still fucking great.

For the next installment in this series, we’re girding our loins and venturing forth into a scary genre of metal (Finnish-style, of course) that we haven’t yet touched upon. So gird your loins with us, or do whatever it is you do with your loins, and join us tomorrow.