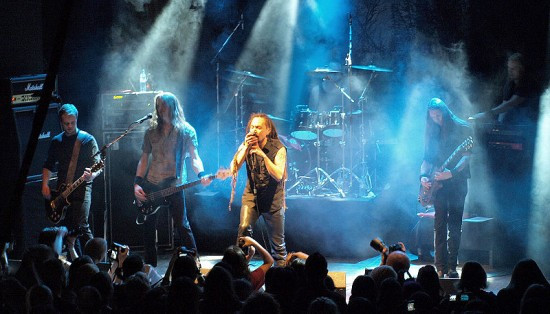 We have a low tolerance for clean singing in metal — hence, the name of this site. With the absence of clean singing tends to come all sorts of other extremity in the music, which is what we like, and which is why we thought “NO CLEAN SINGING” would be a good short-hand way to define the kind of music on which we intended to focus when we started this blog. But from day one, we acknowledged that there would be Exceptions to the Rule, i.e., metal we think is hot shit despite the clean singing, or even sometimes because of it.

In fact, last year, when we compiled our inaugural list of the Ten Most Infectious Extreme Metal Songs of the year, that list included a song with almost exclusively clean vocals. We’ve been thinking about that list recently, because if we’re going to do a 2010 list, we’ve got to get our lazy asses in gear pretty fucking soon.

And then, in an episode of synchronicity or serendipity (we can never remember the difference between those words and we’re too fucking lazy to look it up in an actual dictionary), yesterday we saw a fan-filmed video of that same band playing that same song live on November 23 in Munich, Germany. Problem was, the video quality sucked. But it still reminded us how fucking great the song is. So, we hunted for a better-quality live performance of the song, and we found one.

It’s from a televised Finnish music award show called Emma-gala, which is an annual event (comparable to the U.S. Grammy awards) produced by the Finland chapter of the International Federation of the Phonographic Industry (IFPI). This particular installment of the awards show took place on February 4, 2010, and the band in question won the award for the year’s Best Metal Album. The band performed live at the event and played the song that made our Most Infectious list last year, and that’s the video we found. Stunningly, it only has 9,580 views on YouTube.  Maybe it’s because the tail-end of the video shows the band accepting the award, and if you don’t speak Finnish, it ain’t that interesting.  (more after the jump . . .)

But the song . . . still hot shit. So even though our main post for today is the one below this, with our latest monthly round-up of forthcoming metal albums, we couldn’t resist showing you this video. Because here at NCS, a day without some music to play for you is like a day without food. You can do it, but you go to sleep with an empty feeling at your core. So, check out the video. The band is Amorphis. The song is “Silver Bride”:

This is one of those true exceptions to the rule, a metal song we like not only despite the clean singing, but because of it. There’s something about Tomi Joutsen’s voice that really grabs us.

If you want to see that Nov 23 live performance of the song in Munich, well, here it is (though the quality isn’t nearly as good):

The comment below from our bro ElvisShotJFK reminded us of the surprising Finnish band Barren Earth, which includes ex-members of Amorphis, in addition to Swallow the Sun‘s vocalist Mikko Kotamaki. Their 2010 album Curse of the Red River is fantastic. As Elvis points out, it’s got an inverse ration of growly-to-clean vocals, as compared to the most recent output of Amorphis, but it’s still a sublime combination of the bestial and the beautiful.  Check out this official video for “The Leer” if you haven’t seen it before. Hell, check it out again even if you have seen it

24 Responses to “AN EXCEPTION TO THE RULE”