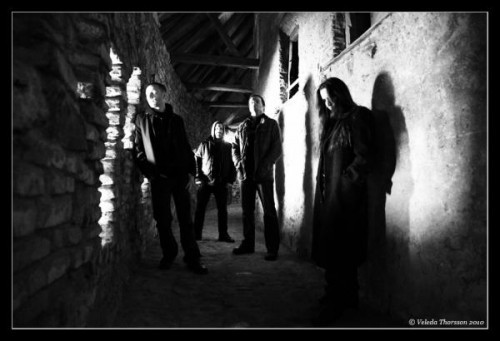 Last Saturday night, I saw Agalloch in concert in Seattle. I was with mi hermana in metal and one of the co-founders of this site, Alexis. The bands that preceded Agalloch — Alda, Waldteufel , and Allerseelen — were immensely interesting and completely outside my usual comfort zone. For me, it was like a door opening to another world. But as good as they were, they were really only a prelude.

I distrust hyperbole. I discount superlatives. We live in a linguistically enthusiastic time, and over-the-top words like “awesome” are used so often (including by me) that it’s become difficult to adequately express truly exceptional reactions to just about anything. But I’ll try anyway.

I’ll say it briefly, but from the heart: I’ve never heard live metal better than Agalloch’s performance. A very few shows I’ve seen are in the same league, but none has been better. It was a long set — one that began at midnight and lasted almost an hour and a half, but I still wasn’t ready for it to end. I was dazed for long after the show ended.

I feel sorta shitty saying all this, because Agalloch doesn’t tour extensively, and most of you will never see and hear them on stage. So it seems like a form of gloating to say what I said. But that’s not how I meant it. What I meant to do was express my honest feeling, as a way of encouraging you, if you do ever get the chance, to see this band live.

If I get my shit together, I will write in more detail about the bands that preceded Agalloch’s set, but for now, I have only a few words about Agalloch and a bunch of half-assed photos — after the jump.

Portland’s Agalloch has been a cult band for most of their career, a perennial darling of critics and of their sect of slavish, admiring fans, but with a low public profile. They do very little to promote themselves, relying largely on word of mouth and the sheer force of their own musical talent to spread what they’re doing. And what they’ve been doing is blending black metal, folk metal, and progressive metal into a fascinating discography of music. But this year, their public profile has grown considerably.

Their new album, Marrow of the Spirit, is making lots of year-end best-album lists. Most prominently, DECIBEL magazine, in the current issue, named it the best extreme metal album of the year, and it seems apparent that the album will find a wider audience than anything the band has previously done.

I think the new album is stunningly good, but I love all their previous efforts, too — particularly 2006’s Ashes Against the Grain. That album is home to a song I’ve played so many times I couldn’t begin to estimate the count: “Not Unlike the Waves”. So when I heard Agalloch was coming to Seattle as part of a mini-tour to celebrate the release of Marrow, I vowed only death or dismemberment would prevent me from being there.

The venue was Neumo’s. Though I don’t visit often because Neumo’s doesn’t often feature metal acts, it’s an excellent place, with a good-sized floor, a balcony on one side, a good sound system, and multiple bars. This was a 21+ show, and so the crowd was bereft of scenesters — though they wouldn’t have showed for Agalloch anyway. Lots of long hair and beards, lots of serious music fans who really knew the songs and got into the sounds.

I decided to park myself at the rail on the balcony for Agalloch’s set. That disabled me from getting any front-perspective photos, but I had an unobstructed view and avoided the crush on the floor.

Agalloch’s recorded music is powerful, but this live performance made every song sound — heavier. And not just because of the volume. Subtle alterations in the arrangements and the guitar tuning (and substitution of electric guitar leads for acoustics) escalated the aggression quotient without sacrificing the often mesmerizing beauty of the music. On some of the songs, John Haughm’s vocals relied more on hair-raising, black-metal shrieking than I remember from the recordings, and that enhanced the overall intensity of the music, too.

The instrumental execution, to my admittedly untrained ears, was flawless, and I loved the song selection — a mix of new material from Marrow (including “They Escaped the Weight of Darkness”, “Into the Painted Grey” and “Ghosts of the Midwinter Falls”), songs from Ashes Against the Grain (including “Limbs”, “Not Unlike the Waves”, and the second part of “Our Fortress Is Burning”), and even a couple of songs from even older releases.

By turns trancelike and headbangingly convulsive, ethereal and pummeling, the music just carried me away. There was a video camera set up on the side of the stage recording the whole thing. I sure hope there’s a video release of this show in our future.  All I’ve got for now, in addition to some pretty fucking vivid memories, are a collection of amateurish photos, made even more blurry by the suffusion of smoke effects shrouding the stage. I picked a few to share, beginning with a shot of John Haughm igniting incense as a prelude to the start of the set. And you might as well listen to this while you scroll through the photos.

Agalloch: Not Unlike the Waves 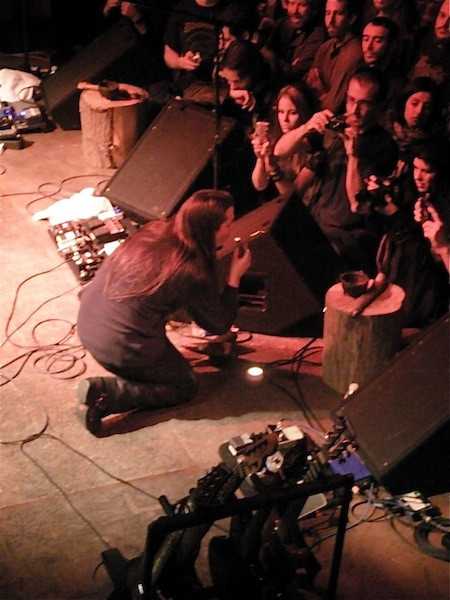 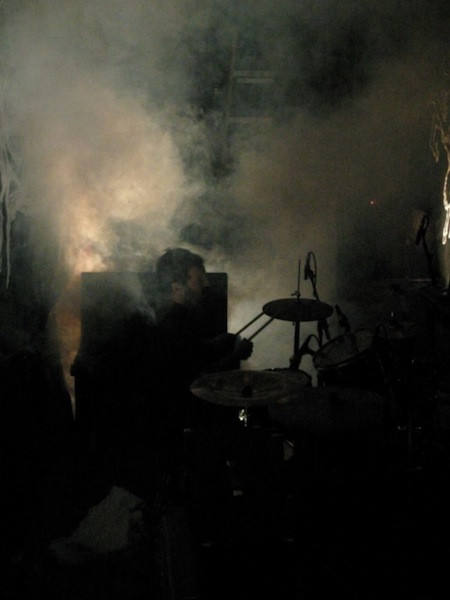 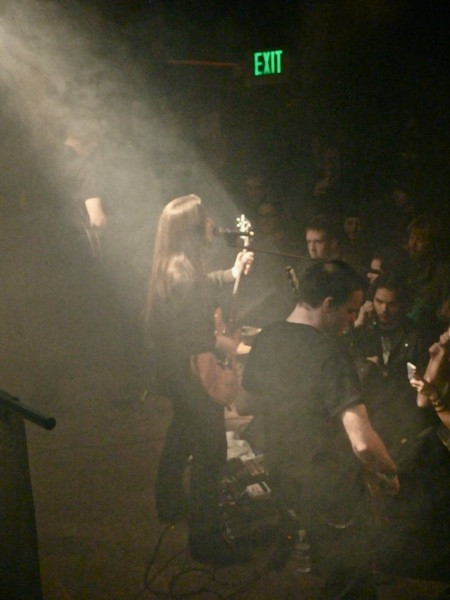 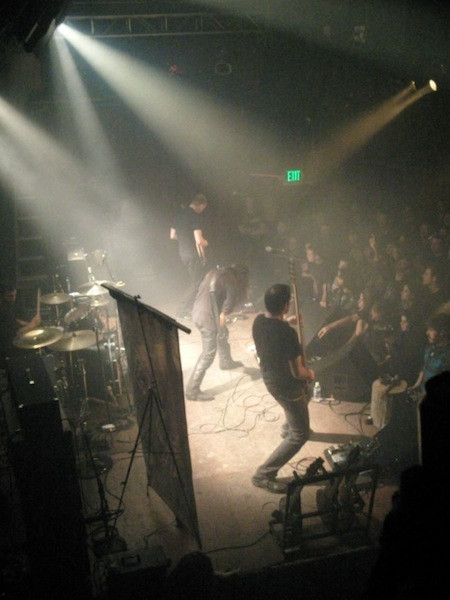 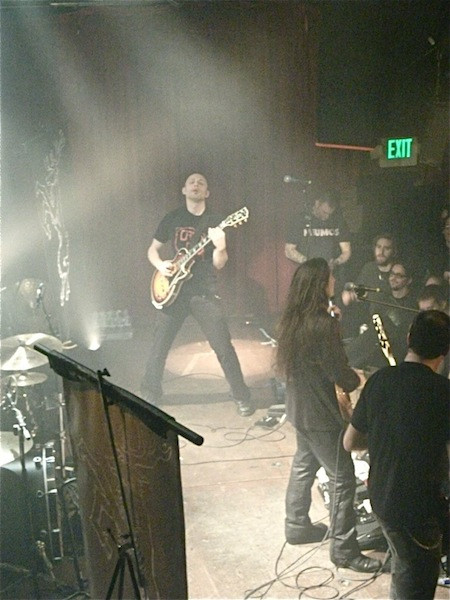 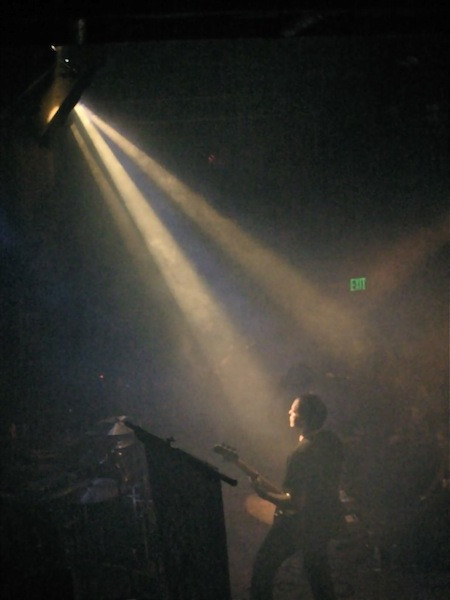 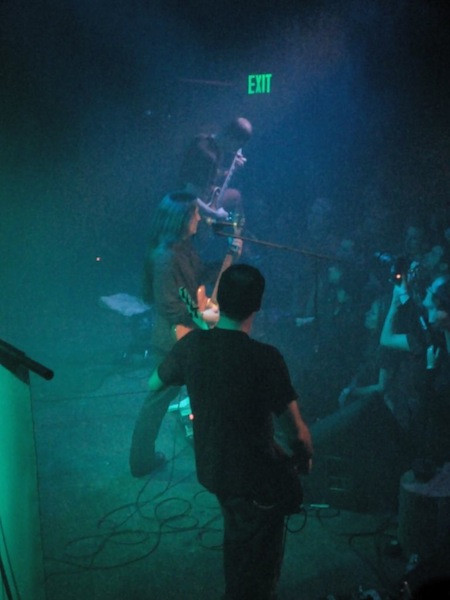 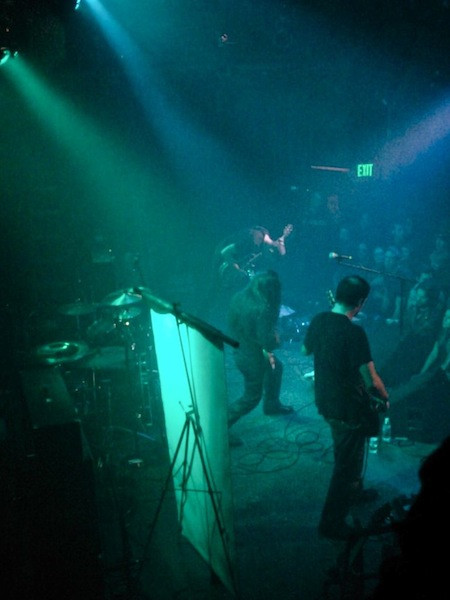 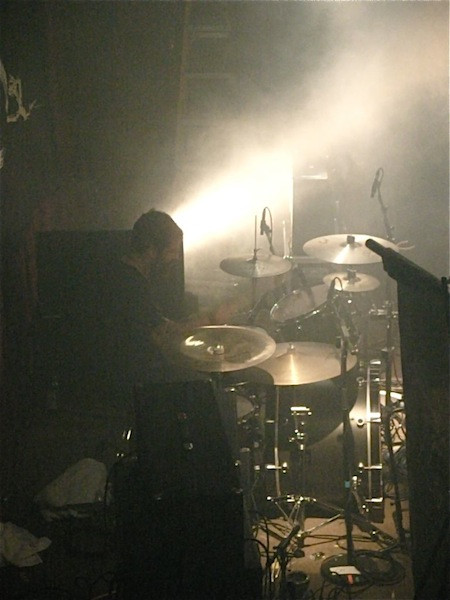 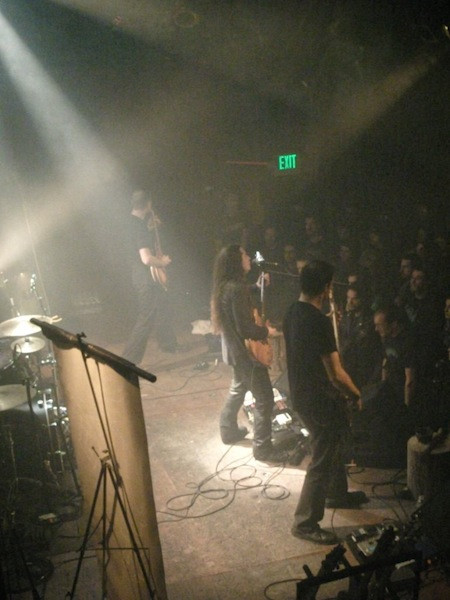 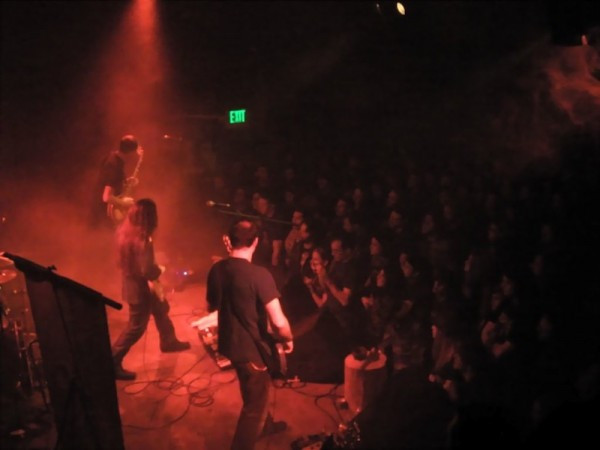 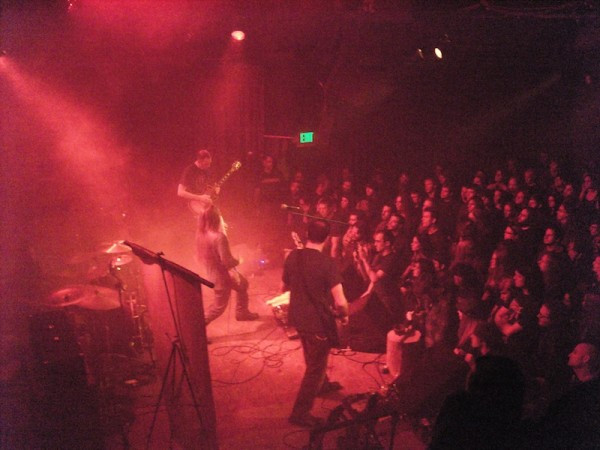