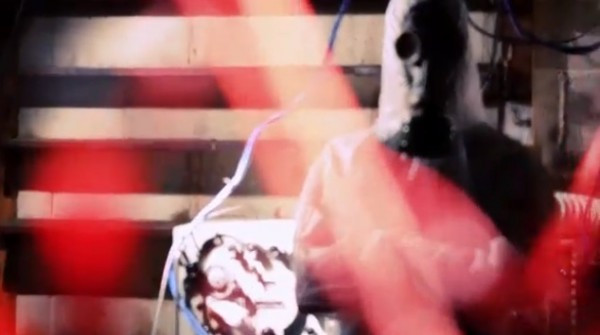 Here, we have a little break from Listmania.

The 2010 release from Living Sacrifice, The Infinite Order, has been one of our favorite albums of the year. It’s an effective combination of death-thrash violence and heavy-as-shit groove. We won’t be giving too much away to reveal that a song from the album will be on our year-end list of 2010’s most infectious extreme metal songs (which we’ll be rolling out beginning next week).

Today, Noisecreep debuted an official music video for the song “Overkill Exposure” from The Infinite Order. The song is a killer, and the video captures the blunt force of the music. Director Michael Dalton told Noisecreep about the video’s thematic origins: “As [vocalist Bruce Fitzhugh] explained ‘Overkill Exposure’ to me, he wanted to make sure I understood the song dealt with some dark content. The message he was portraying on this song was that the dark/evil things we expose ourselves to open us up to more darkness and evil …”

Dalton continued, “When I set out to make this video, I wanted to make sure nothing was pretty and everything had a very eerie feel. What we ended up getting out of that was a story of a man being filled with images of substance abuse, suicide and murder, all heralded in by a raging Living Sacrifice.”

Whether you agree or disagree with the lyrical message — that when we watch movies or TV filled with violence and evil, we ourselves risk becoming infected by it — the video is a good one. You can watch it after the jump.